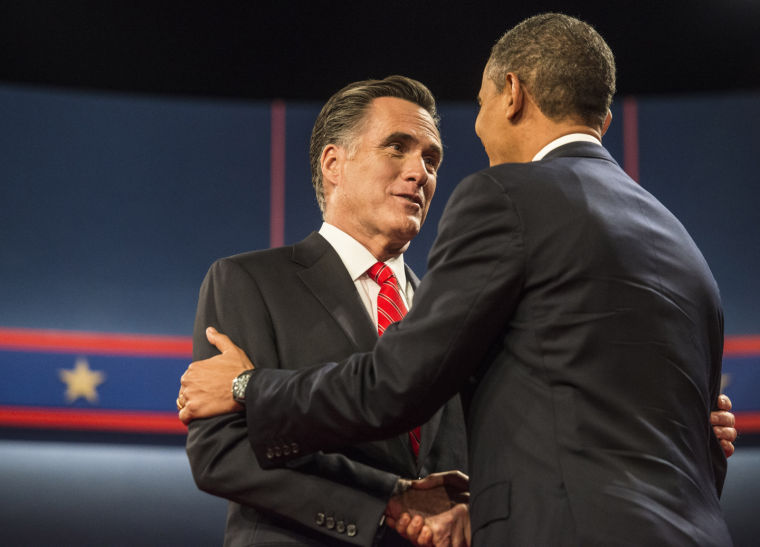 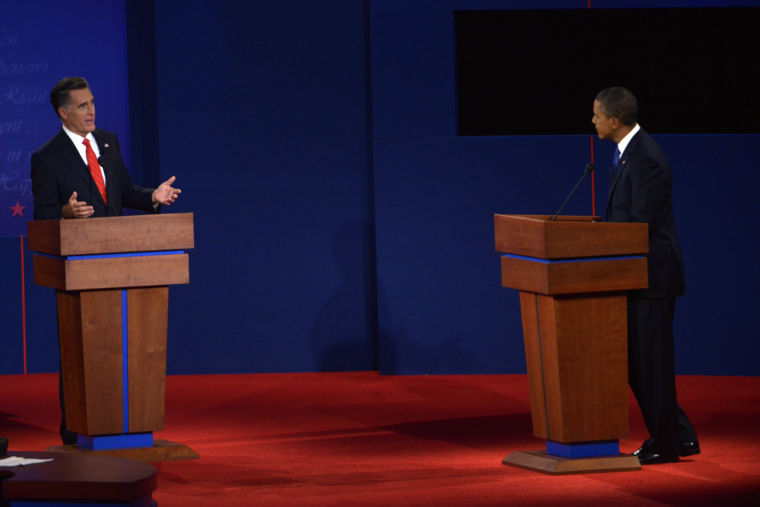 An energetic Mitt Romney launched a series of attacks against President Barack Obama here Wednesday night, calling into question the president's record on the economy, health care and the deficit and arguing that he would take the country in a fundamentally different direction.

Obama sought to parry Romney's criticisms, charging that his rival favors a top-down approach to the economy that would reward the wealthiest Americans at the expense of the middle class and that the details of Romney's proposals don't add up. But he found himself on the defensive repeatedly during their first debate, held on the campus of the University of Denver.

Romney came into the 90-minute debate after several difficult weeks but appeared rejuvenated by the opportunity to take his case directly to Obama and the American people. He was both well prepared and aggressive as he hammered the president. The contrast with Obama was striking, as the president appeared less energetic even as he rebutted some of the toughest of Romney's attacks.

The debate is likely to give Romney what he needed most, which is a fresh look from voters_at least those still undecided or open to changing their minds_and will change the conversation about the campaign, which for the past two weeks has been tilted in the president's favor. Romney now faces the challenge of trying to build on his performance and keep the president on the defensive in the days ahead.

Romney offered conservative policies throughout the evening but he often sounded like a more moderate candidate than he often does in campaign appearances. He is likely to face a challenge from Obama and the Democrats in the days to come about the contrast in tone and posture on display during the night.

But Republicans of all stripes were immediately cheered by the aggressiveness they saw in Romney Wednesday night and took it as a sign that his campaign was ready to wage a fierce battle between now and Nov. 6.

PBS's Jim Lehrer moderated the debate, which included a more open format that encouraged a free-flowing discussion, and most of the night was spent on the economy, deficit and health care. The debate was generally civil throughout and proved to be one of the most substantive and detailed in recent memory.

The weak economy has long been Obama's biggest obstacle to reelection. On Wednesday night he argued that, while the country may still face problems, America has begun "to fight our way back," thanks to his policies and the resilience of the American people.

"Over the last 30 months, we've seen five million jobs in the private sector created. The auto industry has come roaring back. And housing has begun to rise. But we all know that we've still got a lot of work to do. And so the question here tonight is not where we've been, but where we're going."

Through much of the early part of the debate, Romney sought to portray himself as a protector of the middle class, not the wealthy. He said he would not raise taxes on middle-class families and said he would not reduce the share of taxes paid by the wealthiest Americans.

Obama, however, charged that Romney's tax plan would do just that. He said Romney favors a $5 trillion tax cut and argued that eliminating loopholes and deductions for the wealthiest would not provide enough revenue to avoid enlarging the deficit. He said Romney would either have to cut into middle class benefits or cut spending on programs vital to the country's well being.

"The magnitude of the tax cuts that you're talking about, Governor, would end up resulting in severe hardship for people, but more importantly, would not help us grow," he said.

Romney repeatedly has declined to say just what loopholes and deductions he would eliminate and passed up opportunities to do so again Wednesday. But he charged that Obama had mischaracterized his tax plan, claiming that it is not a $5 trillion cut.

"Let me repeat what I said," Romney said. "I'm not in favor of a $5 trillion tax cut. That's not my plan. My plan is not to put in place any tax cut that will add to the deficit."

Obama and Romney clashed over Medicare, with both candidates promising to protect the health care program for seniors. Obama accused Romney of wanting to turn it into a voucher program while Romney claimed that the president cut $716 million from Medicare to help pay for the Affordable Care Act.

Romney was eager to launch into a critique of the Affordable Care Act, the landmark legislation that he cited as his top example of programs that must go to close the federal deficit. "I apologize, Mr. President," Romney added after referring to the program as Obamacare. "I use that term with respect."

"I like it," the president quickly responded, but that was about their only real point of agreement.

Romney argued that the program would raise health care costs and make it less likely that businesses hire new workers. He accused Obama of establishing an unelected board to make health-care decisions for patients, and of cutting more than $700 billion out of Medicare to help pay for the new law. And he chastised him for "pushing through" legislation of such magnitude without a single Republican vote.

"I just don't know how the president could have come into office, facing 23 million people out of work, rising unemployment, an economic crisis at the kitchen table, and spend his energy and passion for two years fighting for Obamacare instead of fighting for jobs for the American people," Romney said. "It has killed jobs."

Obama pushed back, particularly on the point about the cut to Medicare, which he explained, and independent analysis has shown, do not include direct cuts to benefits for seniors but rather ratchet down payments to providers, including insurance companies.

The president also noted that Romney has promised to repeal Obamacare on his first day in office, yet more recently has said he wants to keep some of its provisions, notably its protections for patients with pre-existing conditions and the rights of young adults to remain on their parents' insurance plans.

He also reminded viewers that his law was modeled heavily on Romney's own health reform law, which he championed while governor of Massachusetts. "We've seen this model work really well, in Masschusetts," he said.

"He now says he's going to replace Obamacare and ensure that all the good things that are in it are going to be in there and you don't have to worry," Obama said. "And at some point, I think the American people have to ask themselves, is the reason that Governor Romney is keeping all these plans to replace secret because they're too good?"

Romney defended his plan in Massachusetts, saying he had not raised taxes and had pushed through the bill with signficant numbers of Democratic votes.

On energy, Obama said Romney would continue to favor tax breaks for the oil industry. Romney retorted by noting that the Obama administration has invested more than $90 billion in green-energy projects, "about about 50 years' worth of what oil and gas receives."

On regulatory issues, Romney attacked the Dodd-Frank law that overhauled regulation of the financial industry, but he said some regulations are needed and he would keep them. Obama scoffed at Romney's promise to repeal Wall Street reforms that he signed into law, saying, "Does anybody out there think that the big problem we had is that there was too much oversight and regulation of Wall Street? Because if you do, then Governor Romney is your candidate."

Near the end of the debate, Lehrer asked the two candidates how they might go about making Washington work more effectively. Romney said he would do what he had done working with a Democratic legislature in Massachusetts by sitting down with them and working out compromises.

Obama said that might be difficult if one of Romney's first actions is an effort to repeal the Affordable Care Act, which he said would anger Democrats in Congress. And he accused Romney of being hostage to the most conservative elements of the Republican Party.

"I've got to tell you, Governor Romney, when it comes to his own party during the course of this campaign, has not displayed that willingness to say no to some of the more extreme parts of his party," he said.