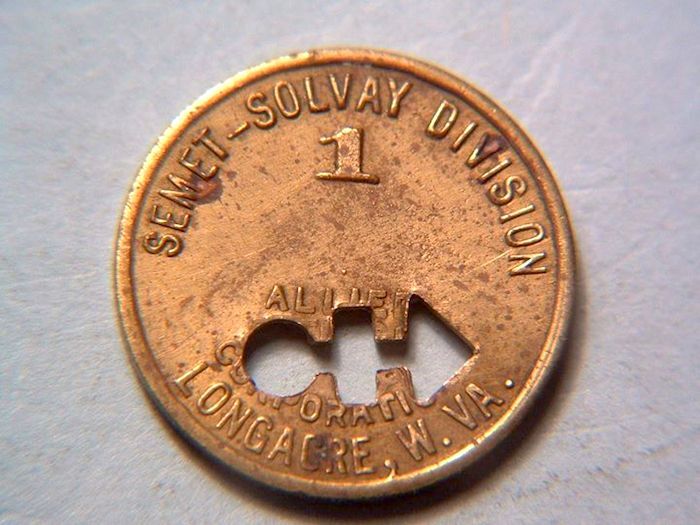 A piece of Semet-Solvay script for Longacre is a reminder of the coal company town. 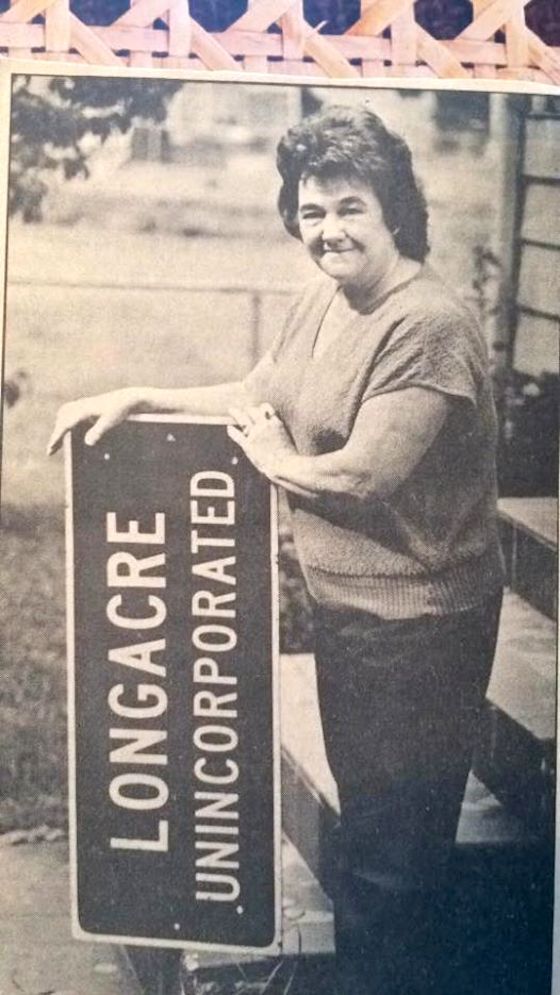 Peggy Coleman, the unofficial Mayor of Longacre, poses with the former community's road sign in an old photo from The Montgomery Herald. Coleman, a longtime columnist for the paper, as well as the organizer of the Longacre Reunion for decades, has been forced to pass the mantle of reunion organizer to others because of illness.

A piece of Semet-Solvay script for Longacre is a reminder of the coal company town.

Peggy Coleman, the unofficial Mayor of Longacre, poses with the former community's road sign in an old photo from The Montgomery Herald. Coleman, a longtime columnist for the paper, as well as the organizer of the Longacre Reunion for decades, has been forced to pass the mantle of reunion organizer to others because of illness.

“A place in my mind, A space in time, Where once I grew, No longer a view.”

Katherine Kelly Johnson wrote those words with many others in a poem entitled “Longacre” included in Longacre Memories (June 2003).

Another story, “A Giant in the House,” written by Steve Farley, from Longacre Memories 2004, related a tale told by Ann Berry to a “bunch of us kids” as they sat on her porch on a warm morning. As the story went, a giant appeared in her house, but as she approached the giant he got smaller and smaller until he was only about the size of the space indicated between her index finger and thumb. At that point, she stopped talking and went back to sweeping. All the children were on the edges of their chairs with the fuzz of their necks standing straight. The nervous children eagerly begged to know what happened next, to which Mrs. Berry replied: “’I took this old broom and I swept him out the door into the yard!”

These are just a couple of the stories written by former residents of the Town of Longacre. They cover subjects such as hopping cars when it snowed. For those who have not heard of such a practice, the young people in the town would gather around a tire fire built to keep warm when it snowed. When a car passed, the older kids would grab the bumper of the car and let the car pull them around the town on their sleds. Others would jump on top of those who had grabbed the bumper to make two or three layers.

Sunday School picnics at the Fayette County Park were another favorite memory as related by Mary Balderson in Longacre Memories 2004: “Were we insane?? The back of the [pick up] truck [driven by Jack McCoy] full of people — standing — riding across [Gauley] mountain full of joy and laughter, with nary a thought of any possible danger.”

Another subject was visits to the Company Store to buy groceries or brown and white saddle oxfords (remember those) or RC Colas into which salted nuts were poured, all of which was paid for with script issued by the mine.

Why have I chosen to bring these subjects up after all this time? Even since the houses in the town were torn down and people were forced to relocate, a Longacre Reunion has been held at the Fayette County Park on the first Saturday of June. Last year, the reunion had to be canceled due to the pandemic. Unfortunately, it must be canceled again this year because of age and illness involving the organizers of the event. We hope to have the event next year, but we are not promised next year or even tomorrow.

In that vein, I recently came across two Longacre Memories booklets from 2003 and 2004. After reading these stories, I would like to create another booklet about the Town of Longacre and the over 40 reunions that we have held. So I am asking former residents or their children or grandchildren to submit stories or photos about the Town of Longacre or about the reunions. Please email them to me at janice.l.wiseman@gmail.com. I will gather them all together and either post them on the Longacre, West Virginia - Growing Up There group page on Facebook or will mail copies to those who request not only the new booklet but the ones from 2003 and 2004 plus the story about Longacre I wrote for The Montgomery Herald last year.

Please, all you Longacre people who are still out there, don’t let me down.