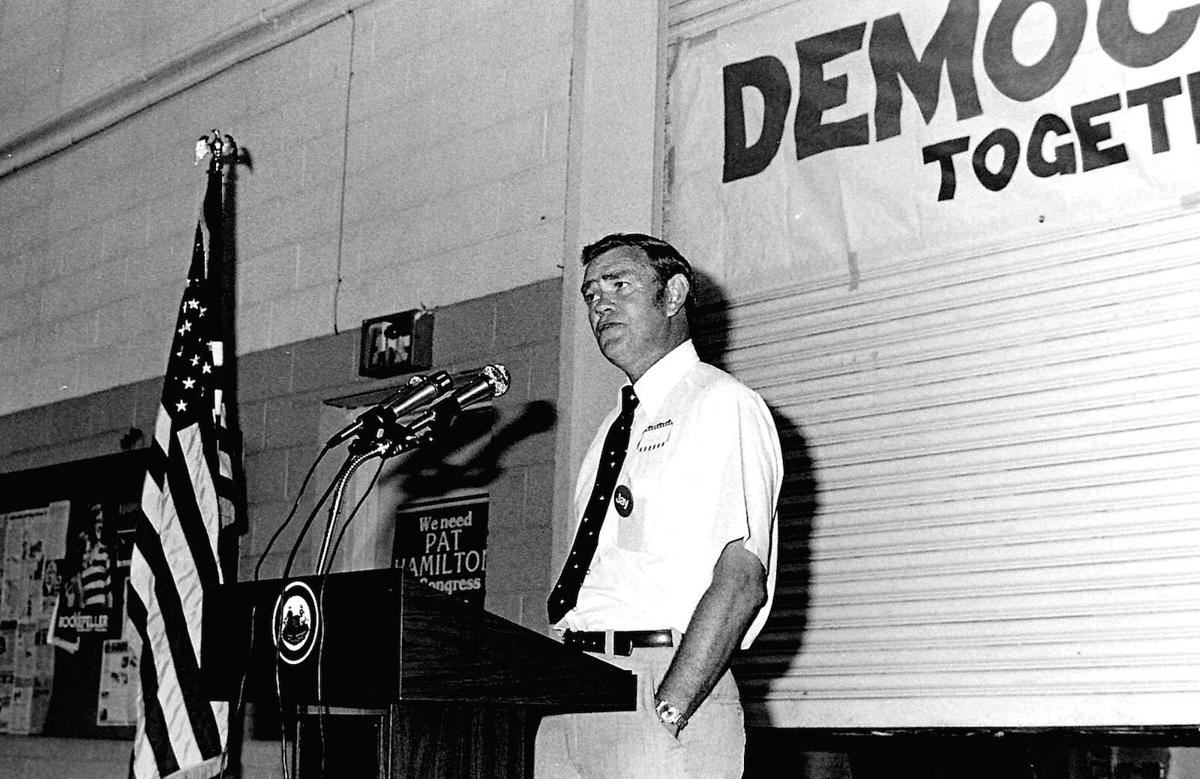 Shirley Love is photographed at a local political rally in 1980. Love, a veteran broadcaster and legislator, died on July 17 at the age of 87. 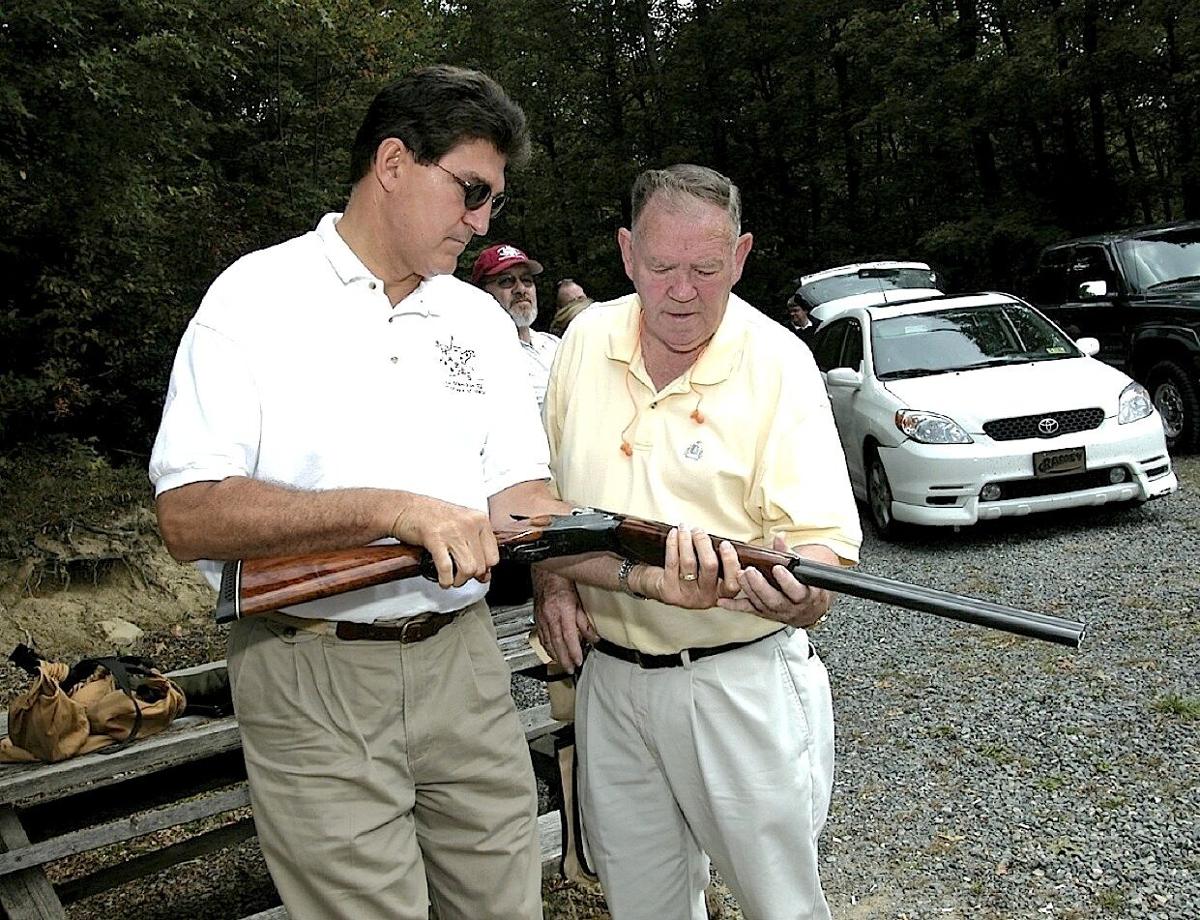 Then-State Sen. Shirley Love and then-Gov. Joe Manchin got together with other local individuals for a skeet shooting session in Fayette County in 2007. 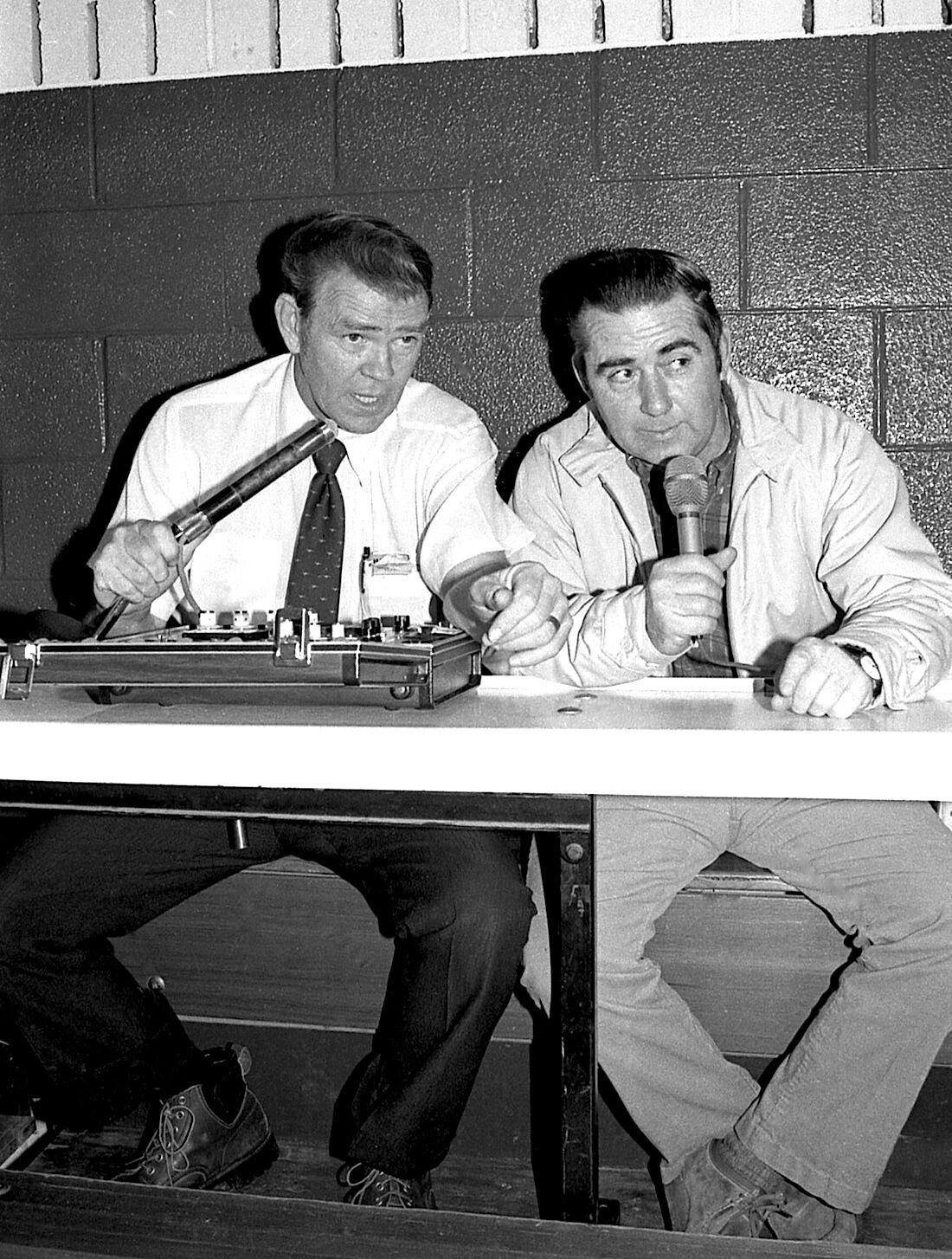 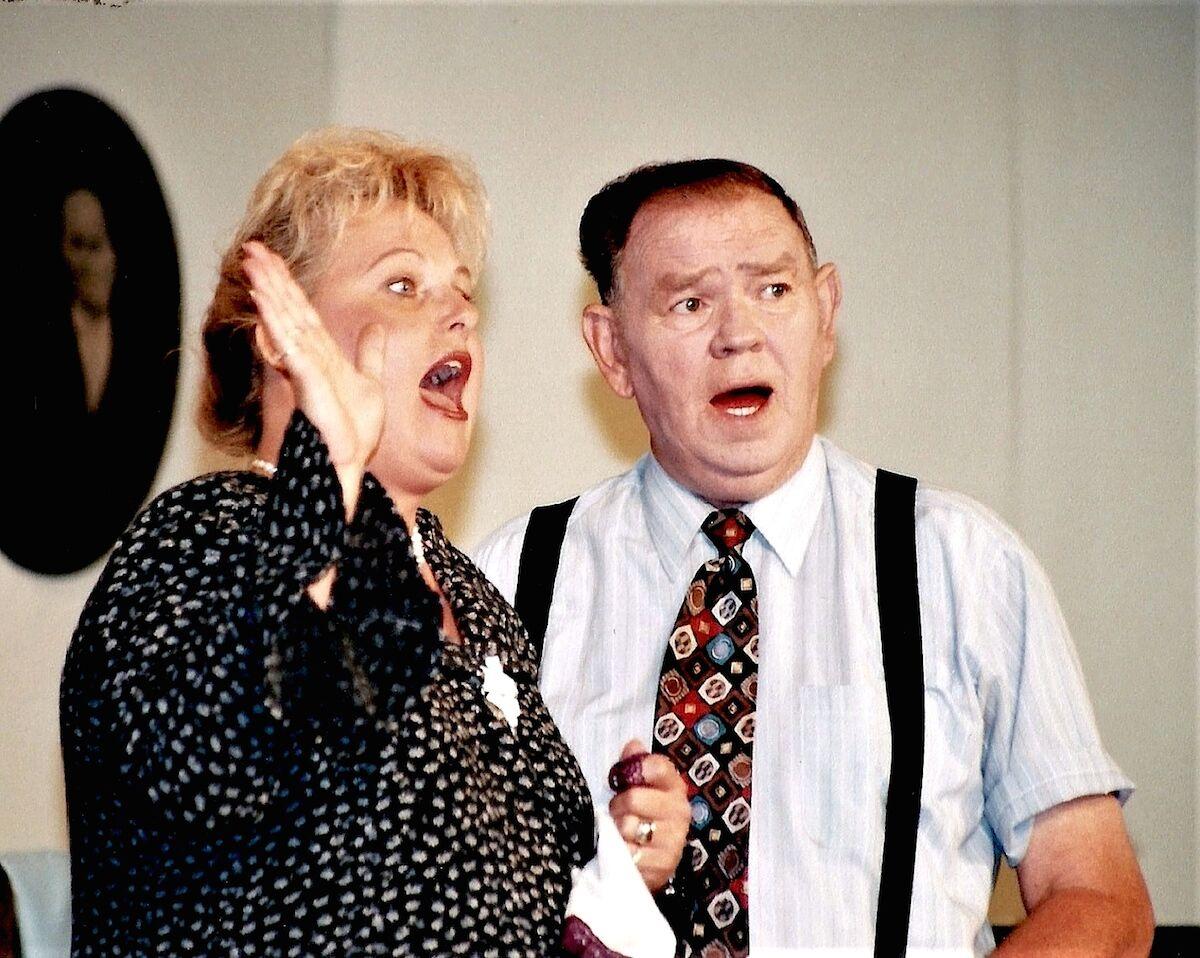 Merry Hanning and Shirley Love perform in "Smoke on the Mountain" at the Historic Fayette Theater in Fayetteville. 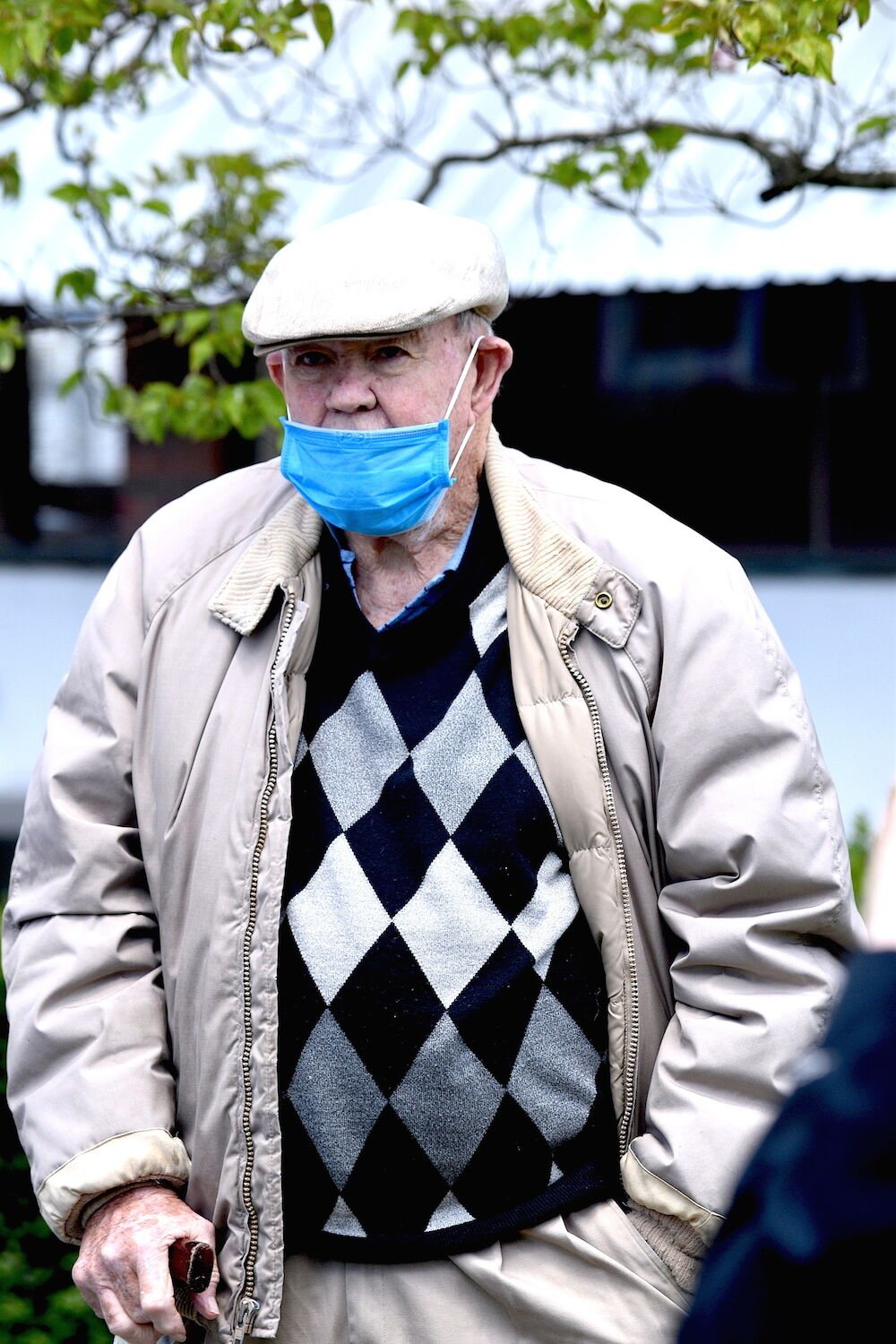 Love was in attendance for a stop in Oak Hill on May 9 of this year by Dr. Ron Stollings, who was then seeking the Democratic gubernatorial nomination.

Shirley Love is photographed at a local political rally in 1980. Love, a veteran broadcaster and legislator, died on July 17 at the age of 87.

Then-State Sen. Shirley Love and then-Gov. Joe Manchin got together with other local individuals for a skeet shooting session in Fayette County in 2007.

Merry Hanning and Shirley Love perform in "Smoke on the Mountain" at the Historic Fayette Theater in Fayetteville.

Love was in attendance for a stop in Oak Hill on May 9 of this year by Dr. Ron Stollings, who was then seeking the Democratic gubernatorial nomination.

In a diverse career that included encountering fired-up wrestlers and their sometimes-rabid fans and later pushing through legislation to help his home district, Shirley Love amassed a large number of followers — and friends.

A broadcast pioneer, former state legislator and beloved family man, Love passed away on July 17, 2020 at Bowers Hospice House. He was 87.

On Friday, Gov. Jim Justice issued a proclamation ordering all United States and West Virginia flags at the Capitol Complex and all state-owned facilities in Fayette County to be displayed at half-staff from dawn to dusk on Monday, July 20 to commemorate "the distinguished life and service of former state legislator Shirley Love."

An Oak Hill native who is a member of the Oak Hill High/Collins High Red Devil Sports Hall of Fame, Love represented Fayette County in the West Virginia Legislature as a senator from 1994 to 2008 and a member of the House of Delegates from 2016-18.

Love was revered as a television and radio broadcaster in West Virginia for more than four decades, becoming an integral part of the WOAY family in both radio and television broadcast capacities. He oversaw shows such as "Juke Box Review" on radio and "Friday Night Barn Dance," "West Virginia Bandstand" and "Chapel Hour" on TV. He is perhaps most fondly remembered by many as the announcer for WOAY-TV's "Saturday Night Wrestlin," a local staple for more than 20 years ending in 1977.

"This (the wrestling show) was probably the most watched show," Love recalled in an interview in The Raleigh Register in Beckley on Dec. 2, 1984. "People would come from Virginia, Kentucky, even Ohio. ... People watched it for the wrestling itself, but other people watched it to see the people. Folks would get carried away, jump into the ring, and they'd do their thing, too. They would actually want to fight and a lot of them did fight." The show featured some of the "top wrestlers in the country in that auditorium" at the time, he said.

Besides flying mares inside the ring and the occasional flying chair outside, a highlight of the evening's entertainment occurred when Love interviewed those in attendance during lulls in the action.

Love was inducted into the West Virginia Broadcasting Hall of Fame in its inaugural class in 2006.

"I grew up watching him on TV and listening to his voice," Justice said. "I knew him very well, and I know his family. Cathy and I just want to pass on our thoughts and prayers to a great family and a great West Virginian that we've lost."

On Friday, U.S. Senator Joe Manchin (D-WV) expressed his condolences on Love's passing. "Gayle and I send our hearts out to Shirley's family, especially his wife Audrey, his children Christie and James, and his grandchildren for the loss of a great West Virginian and selfless public servant," Manchin said in a statement. "For more than five decades, Shirley served as an incredible broadcaster. ... After his broadcasting days were over, Shirley then served the great people of Fayette County in the state legislature for over two decades, fighting tirelessly for his constituents in Charleston. I consider myself lucky to have called Shirley a dear friend and I know I am not alone in my admiration and respect for Shirley and his work."

Love was an avid sportsman and active in church and Democratic Party activities. One of his memorable TV news assignments was early coverage of the Siltix Mine disaster in Mount Hope in July 1966. He was also the longtime voice of Oak Hill Red Devil sports on the radio. He and his wife of 68 years, Audrey, who survives him, together were delegates to the Democratic National Convention during their careers.

In 2009, Love was the subject of a biography, "A Man Called Shirley," which was penned by Mannix Porterfield, a former reporter for The Register-Herald. The book chronicled Love's colorful life, exploring his broadcasting and political career, as well as involvement in other activities such as community theater.

Friend and broadcast partner Bill Laird, who succeeded Love in the State Senate in 2008, recalled him fondly. "The key to Shirley ... is he really knew people," said Laird, who joined Love in broadcasting local high school football and basketball games for WOAY Radio in the early 1990s. Laird learned a lot from Love as he navigated through his early broadcasting days "all in the shadows of the legend himself," as well as relying on Love for his knowledge in the political realm.

Laird also remembers watching "Saturday Night Wrestlin," even managing to take in a few live shows. "I did attend a few. I stood up on the back of the chair and watched the performances."

Merry Hanning called the Historic Fayette Theater's various performances of "Smoke On The Mountain" over the years "what an amazing experience." And she cherished acting with Love. "For almost 25 years, I had the honor and pleasure to be Vera to Shirley Love's Burl Sanders in multiple runs of the play at Historic Fayette Theater," Hanning said. "With this show, Shirley found yet another way to use his ability to entertain an audience not only with his very recognizable voice but also with his beautiful singing.

"He was fun to watch on stage and we shared tricks on hiding our line clues (mine were in a song book) since neither of us could always remember everything. Shirley wrote his clues in his finger tips. He told me that when he did Saturday Night Wrestling he would write the names of his commercials, in order, on his fingers so he got them correct and didn't do Belle Furniture instead of Blackburn Ford or whatever the weekly lineup was."

Hanning holds "two very special memories" of her HFT interaction with Love. "He and I sang "Whispering Hope" as a duet," she recalled. "I loved singing with him. Every time we did that song it was a joy for me and then, looking into the audience as we sang, I would see his sweet Audrey smiling up at him with such love and pride. When we would encounter each other at some event Audrey would introduce me as 'Shirley's other wife,' which made us laugh at shock on the other person's face. It was an honor to be his wife on stage."

"My other memories are of our 2000 trip to Wales where we performed "Smoke On The Mountain" in five different cities. Neither of us ever thought we'd have an opportunity to perform overseas but our director Gene Worthington made it happen. And what a trip it was. Shirley (always a supporter of the arts) secured funds from the state budget to help us be a Cultural Exchange troupe. We did our shows, sang impromptu on planes, trains, in castles, just anywhere one of us felt like singing. He made each of us a picture disc of our trip. The last time he was in my office a few months ago we shared memories of that trip and relived being in Wales. I think Shirley was proud of his role as Burl Sanders."

Then-Midland Trail High School student Dean Bibb interviewed Love in a 1991 documentary for his senior broadcast project under the supervision of Ed Warfield at the Fayette Plateau Vo-Tech in Oak Hill. Bibb, who now lives in Beckley and runs a cleaning company called Epic Clean, said Love "gave me absolutely no reason to be nervous. He realized this was a big deal for me." While Bibb originally intended to focus mainly on the wrestling portion of Love's life, Love prompted him there was a "bigger story" to tell, and they explored several aspects of Love's career.

During the discussion, though, Love did say of "Saturday Night Wrestlin": "That's the one that everybody enjoyed. That was everyone's Saturday night opera."

Now, the area is saying goodbye to the conductor.