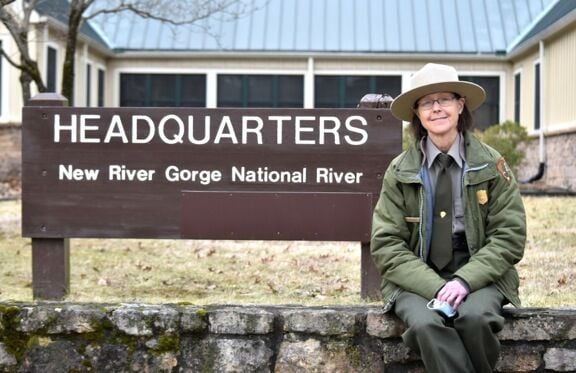 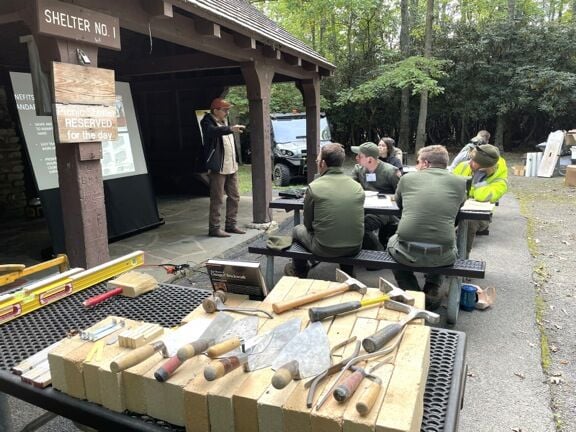 The National Park Service's Maintenance Action Team (MAT) meets to plan work on the Grandview Hearth and Shelter Restoration project. The NPS dedicated $14.1 million from the FY21 LRF program to address deferred maintenance needs in 33 states and 59 small and medium-sized parks. Grandview was one of the early, smaller projects, as New River was one of the first parks to receive funding from the Great American Oudoors Act for a national park project. 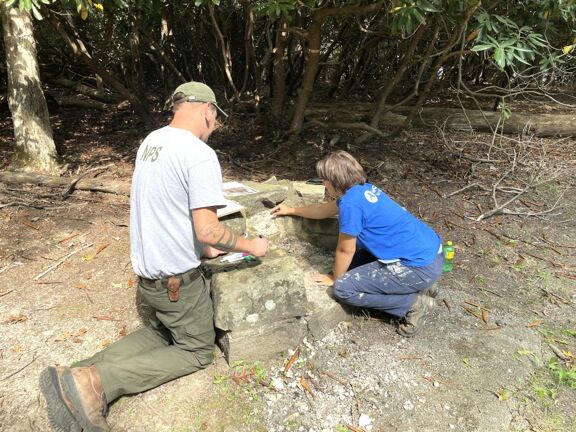 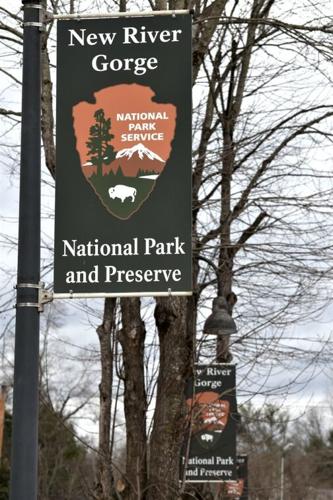 The New River Gorge National Park & Preserve, designated as such in December 2020, registered a large increase in visitors in 2021.

The National Park Service's Maintenance Action Team (MAT) meets to plan work on the Grandview Hearth and Shelter Restoration project. The NPS dedicated $14.1 million from the FY21 LRF program to address deferred maintenance needs in 33 states and 59 small and medium-sized parks. Grandview was one of the early, smaller projects, as New River was one of the first parks to receive funding from the Great American Oudoors Act for a national park project.

The New River Gorge National Park & Preserve, designated as such in December 2020, registered a large increase in visitors in 2021.

As visitation numbers swell on the heels of the fairly fresh minting of the United States’ newest national park, National Park Service employees and those in the general public as a whole are mindful of the needs to expand or update infrastructure going forward.

West says it’s still “too early” to definitively discuss projects that will eventually help shore up infrastructure in the local NPS entities.

“There were parks that submitted projects fairly early that were funded for 23-24, but we weren’t one of those parks because we came in a little bit later on, so it’s really too early to speak to that,” she said.

“With any kind of funding process, the way we do things we’re always about three years and out anyway,” West continued. “There’s a variety of different ways projects are funded.”

Specific projects always of major interest in prioritization lean toward wastewater and other projects that help protect park resources, according to West. Anything that involves protection for the resources, as well as visitor safety, “are always our number one priorities.”

According to information provided by West, the Great American Outdoors Act presented the USDA Forest Service with new opportunities to deliver benefits to the American public through major investments in recreation infrastructure, public lands access and land and water conservation. These investments will enrich communities by contributing to economic growth and job creation in rural America.

GAOA provides permanent full funding for the Land and Water Conservation Fund (LWCF) that will advance the administration’s 30x30 conservation goals and establishes a new National Parks and Public Land Legacy Restoration Fund (LRF) to address the deferred maintenance backlog for the Department of Agriculture and Department of the Interior in fiscal years 2021-25.

A recent project funded by the act was the Grandview Hearth and Shelter Restoration project. The NPS dedicated $14.1 million from the FY21 LRF program to address deferred maintenance needs in 33 states and 59 small and medium-sized parks. Grandview was one of the early, smaller projects, West said, as New River was one of the first parks to receive funding from the act for a national park project.

This particular project, executed by the NPS's Maintenance Action Team (MAT), preserved and maintained 30 of the original historic hearths located at five different shelters and restored a picnic area to a usable condition. It included such tasks as repointing, new fire brick, replacement cooking surfaces and stone repairs. Repairs to the shelters' framing and wood features were performed, CCC road culverts and other masonry features around the Grandview site were repaired to improve the visitor experience.

According to West, MAT is a group formed of skilled and experienced NPS masons and maintenance workers from both the Historic Preservation Training Center and the NRGNPP that was assembled to perform the “much-needed preservation maintenance work that has long been deferred at this site.” This and future GAOA MATs are designed to provide opportunities for youth and veterans to work with and get training in skills associated with the care and maintenance of NPS sites. This could include trades such as carpentry, masonry, plumbing or even HVAC work.

West says a pending project – which was in the works before the national park designation – will make a big difference, too.

The planned expansion of the Canyon Rim Visitor Center in Lansing will be a boost, she said. “That’s going to be a wonderful addition, and it just so happens the timing is perfect.” New exhibits are expected to be added by the beginning of 2023, two years after the park redesignation occurred.

New signage around the park will continue to be installed, as well. The process of hiring seasonal staff is ongoing, too.

“The park is looking down the road at long-range plans for (bolstering) anything that is one of our heavily used areas,” West said. One of the aspects of legislation passed under the Consolidated Appropriations Act of 2021 allowed the opportunity for the park boundaries to be expanded by about 100 (not consecutive) acres, West said. “They did that with the expectation of increased visitation that would lead to the necessity of expansion in some areas.”

The New River Gorge National River was designated as a national park in December 2020. Officials have cited increased visitation numbers since then.

According to a breakdown of the park numbers from WV Public Broadcasting via the NPS, the NRGNPP experienced a record number of visitors in 2021. Nearly 1.7 million people (1,682,720 to be exact) visited the park last year, an increase of more than 600,000 from 2020. According to recent numbers revealed by the NPS, 60 million more people visited national parks in 2021 than they did in 2020.

Many national parks had experienced a decline in visitors in 2020 due to coronavirus-related shutdowns.

“It’s wonderful to see so many Americans continuing to find solace and inspiration in these incredible places during the second year of the pandemic,” National Park Service Director Chuck Sams said in a press release.

The New River Gorge NPP ranks No. 47 on the National Park Service’s list of most-visited sites. With 70,000 acres in Fayette, Raleigh and Summers counties, it is the newest national park in the system.

Becky Sullivan, executive director of the Fayette County Chamber of Commerce/New River Gorge CVB, said 2021 visitation numbers at the CVB were similar to 2019.

“In 2021, people were ready to come out and explore the new national park, so we got a lot of increased travel from that year,” she said.

The CVB is seeing an increase in visitor guide requests. Volunteers have remained steady, and the Chamber/CVB will add a full-time employee soon to serve as a visitors center and event coordinator.

Looking down the road as visitation to the region is expected to increase, Sullivan said, “I think with the expected increase in tourism this year, I think that we are ready. But there are a lot of changes coming, a lot of new infrastructure coming.”

“As far as our increased numbers that we had last year, I thought we did a fairly good job of spreading the footprint out,” West said. “We encouraged visitors to plan like a park ranger, make sure you plan ahead and make sure you know where the most popular areas are to go to.”

Areas of interest such as Long Point and Endless Wall are popular, but there are many other options in the region, West said. “If you go there and the parking lot is full, don’t go. Come back later on.”

“We’ve got Grandview – a variety of trails there that are wonderful trails, that people don’t go to as much. They’re wonderful areas, they’re just not well-known.”

“We have what we call the wild and the mild, we have the North Wild and the South Mild. The southern end of the park has tended in the past to get fewer number of visitors, not because they’re not beautiful areas, the beautiful Grandview, the historical district of Hinton – all those areas are wonderful spots to go to. It’s just that people didn’t know about them as much.”

In the coming year, park staff will continue to adjust to more activity and look to the time that more infrastructure projects can begin.

“I anticipate we might have increased visitation from our foreign visitors,” she added, mentioning a travel writers group’s visit to the area in 2021 that helped spread the word of the new national park. “Traditionally when (overseas visitors) come to the United States, they like to go to national parks. Now that we’ve got that tag line national park, I envision that we might get some more foreign visitors as well.”

West said she appreciates the work of everyone as the adjustment period continues.

“Everybody’s been very responsive to helping us out … to make the park safer for the visitors,” she said. That includes West Virginia Tourism, local businesses and outfitters and others. “We’re all trying to take care of this place for the good of all of us.”

For more on the park, visit https://www.nps.gov/neri/index.htm