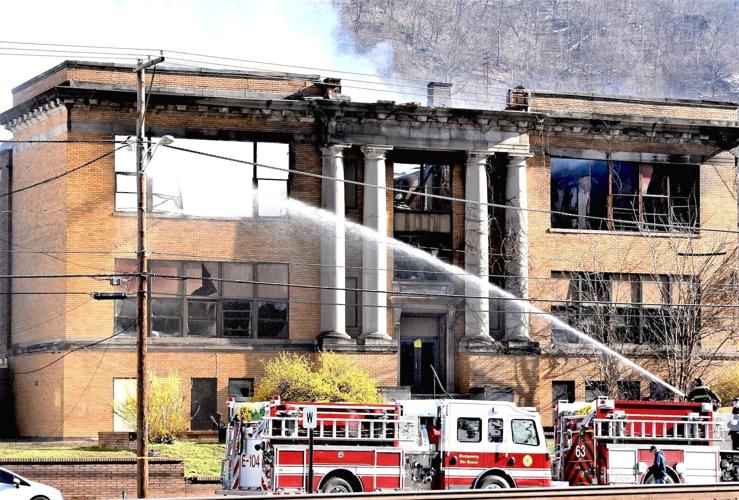 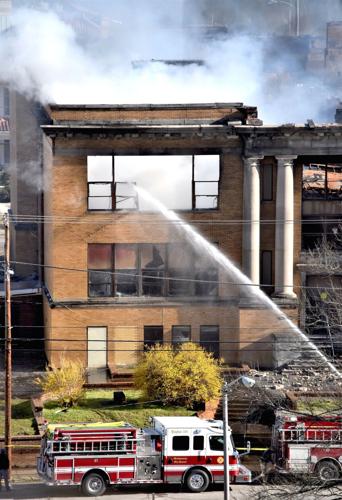 MONTGOMERY — Crews from various fire departments in the region worked Sunday evening to contain a “fast-moving” fire in a vacant former school building.

According to Montgomery Fire Chief Benny Filiaggi, the fire was reported shortly after 5 p.m. on Sunday. It was in a structure that was formerly home to an elementary school and junior high school, and later Montgomery City Hall.

Also responding to help secure an adequate water supply from the nearby Kanawha River were departments from Pratt, Handley, East Bank and Gauley Bridge, he said. “We had to set two lines up to the river,” said Filiaggi.

“Conditions were so bad we couldn’t even make entry,” the chief said.

Crews were on scene until midnight Sunday and some were back onsite Monday morning, still applying water to the smoldering ruins.

“Actually, the fire got knocked down relatively quick (Sunday),” Filiaggi said. “Probably within an hour we had it down to where we could control it with a big line.”

The blaze didn’t affect any other local structures, the chief said. “It stayed within the confines of the building.”

There were no injuries reported.

The fire was of suspicious nature, Filiaggi said.

“This was a very fast-moving fire for a building that doesn’t have a lot of contents.”

The State Fire Marshal’s Office was expected to arrive at the scene Monday to investigate and make a determination on the cause of the fire.

“The best thing we can do is let it burn for a little bit (so it) burns us a hole and so we can get water in to where it needs to be,” said Filiaggi.

An excavator was on site Monday to be utilized to take down a couple of unstable walls, he noted.

“Hopefully, (the operator) can dig out some of that so we can go in more,” Filiaggi said. “I think the basement’s probably full of water.”

He said the corners of the building are stable.

Filiaggi said that he has heard from law enforcement personnel and community members that individuals have accessed the building at times.

“They’ve been seeing people going in and out of the building,” Filiaggi said. “They’ve secured it as much as they can, but obviously they force their way back in it.”

To his knowledge, Filiaggi said he was unaware of anyone being in the building at the time of the fire.

“We haven’t been able to get in,” he said. “There’s somebody they thought was missing and, from what I understand, they’ve been found.”

Filiaggi said a church in town also caught fire a few days earlier when a blaze was ignited in a plastic bucket. He called it “not a big fire, just a smoking fire. We were able to get in with just a very little bit of water and put it out.”