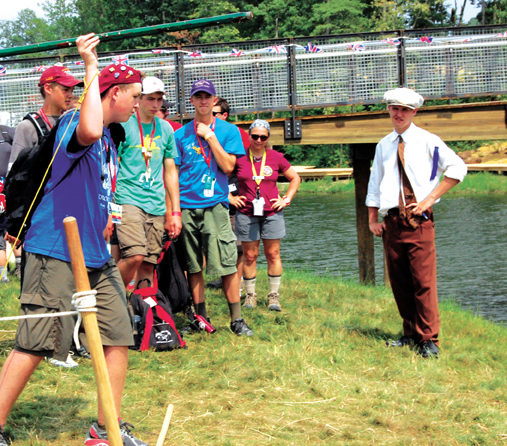 Scouts on Brownsea Island wait patiently for their turn at “harpooning” a whale. The adaptation of one of Baden-Powell’s games doesn’t require a real harpoon, or a whale in Goodrich Lake for that matter. 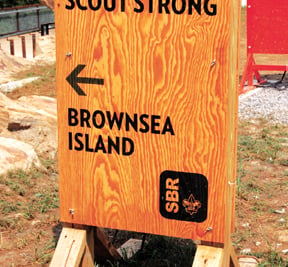 Brownsea Island is pin-pointed on a map. 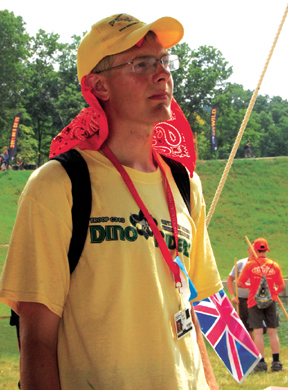 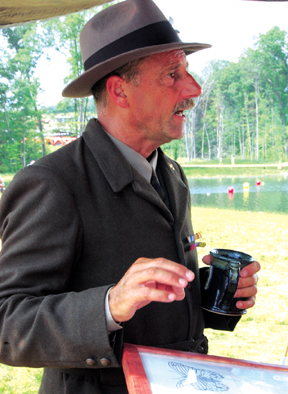 Michael Rettinhouse of Vallejo, Calif., right, in character as Lord Robert Baden-Powell, tells Scouts of his experiences as a soldier and later as a leader of young boys in an experiment that grew into the Boy Scouts.

Scouts on Brownsea Island wait patiently for their turn at “harpooning” a whale. The adaptation of one of Baden-Powell’s games doesn’t require a real harpoon, or a whale in Goodrich Lake for that matter.

Brownsea Island is pin-pointed on a map.

Michael Rettinhouse of Vallejo, Calif., right, in character as Lord Robert Baden-Powell, tells Scouts of his experiences as a soldier and later as a leader of young boys in an experiment that grew into the Boy Scouts.

The Summit Bechtel Reserve is hosting the most electronically connected, high-tech National Boy Scout Jamboree in history. But the old ways haven’t been forgotten or forsaken.

From wood carving to archery, the Boy Scouts at The Summit still observe the organization’s heritage. That’s evident by the numbers of Scouts and Venturers taking part in those activities at The Summit and nationwide. In 2012, the top 10 merit badges Scouts earned that were not required for Eagle rank reads like a list of badges that could have been popular 25, 50 or even 100 years ago: Rifle shooting, leatherwork, archery, wilderness survival, fingerprinting, wood carving, canoeing, fishing, chess and art.

There is one spot at The Summit, though, that perhaps commemorates the legacy of the Scouts like no other. And in spite of all the high-tech offerings and opportunities around The Summit, that spot was busy Thursday.

The replica Brownsea Island is an actual island in Goodrich Lake. There Scouts and Scout leaders have recreated a miniature version of the island off the coast of England where Robert Stephenson Smyth Baden-Powell, 1st Baron Baden-Powell, a lieutenant general in the British Army, first camped with 22 boys in 1907 in a test which led to the creation of Scouting.

Michael Rettinhouse, a Scout leader from Vallejo, Calif., who also happens to be an actor, told Lord Baden-Powell’s story to Scouts Thursday.

When he joined the British Army, Baden-Powell’s first assignment was with the 13th Hussars, a cavalry regiment probably best known for its involvement in the Charge of the Light Brigade in the Crimean War. Baden-Powell tested so highly that “I was sent right away to India,” Rettinhouse said in character.

Once in India, his military assignment was “information specialist.” “It’s a spy. That was my job,” Rettinhouse said. Baden-Powell soon saw, however, that the British Army was operating in a manner that was unwieldy and didn’t lead to much success. He discovered many of his men didn’t know such vital things as basic first aid or how to survive in the outdoors. “I thought there had to be a better way.”

In Baden-Powell’s estimation, smaller groups of soldiers should form patrols, “6 to 8 men, self-sufficient in the field” rather than sending a large contingent of soldiers all together, many of whom didn’t know how to even survive. To that end, Baden-Powell wrote a book, “Aids to Scouting.”

Returning home following his service in India, the war hero was shocked to learn that his book had been adopted not only as a military manual but by the general public. “I found out that teachers were using the book in schools.”

While the purpose of his book had been military in its origins, Baden-Powell saw its worth and probable benefits to young people.

“We’re doing an experiment here on Brownsea Island,” he told the Scouts gathered Thursday. “We brought 22 boys to participate in a 10-day course.” The 22 boys are camped on the island, learning to survive, learning to play new games. “We’re testing to see if the boys will take to the games, and if they do, they will be compiled into a full book.”

Games were far from the only thing taught on the original Brownsea Island back in 1907, as Baden-Powell worked to instill a sense of citizenship, trustworthiness, morality and other qualities in the youth.

“This historic campout was a success and resulted in the advent of Scouting,” according to the Boy Scouts of America website at www.scouting.org. “Thus, the imagination and inspiration of Baden-Powell, later proclaimed Chief Scout of the World, brought Scouting to youth the world over.”

Baden-Powell said his desire to introduce the concept of being a good scout to the youth of England was a simple one: “I wanted them to be able to point the way in their daily lives as well as in the field.”

Michael Christiansen, of Utah, was among the young Scouts interested in the story and the recreation of Brownsea Island. He asked question after question of Baden-Powell, further exploring the origins of Scouting on a tiny island just off the southern coast of England.

“I knew a little bit about Brownsea Island,” he said, “but I didn’t know all this. I didn’t know schools adopted his book. That’s interesting.”

Around the island, Scouts took part in games and activities similar to the ones the 22 youth learned back in 1907 while other Scouts used their cell phones to take photos of Baden-Powell and their counterparts.

It was a perfect blend of the old and the new.