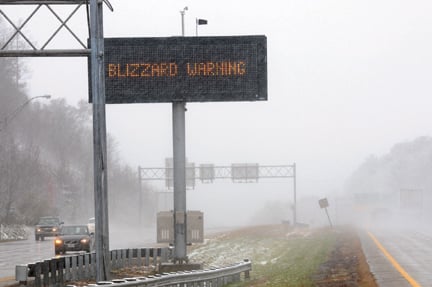 The blizzard warning sign on U.S. 19 shows the start of the bitter mess of Monday. 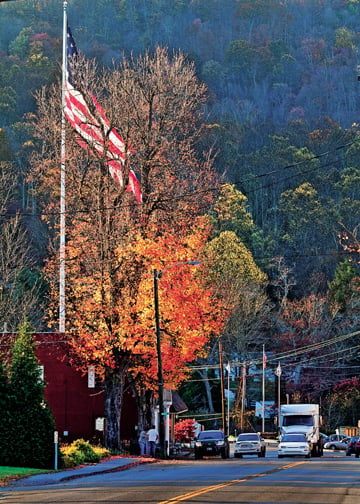 Here, the beauty of Indian summer in Ansted is shown on Oct. 25, just four days before the storm hit.

The blizzard warning sign on U.S. 19 shows the start of the bitter mess of Monday.

Here, the beauty of Indian summer in Ansted is shown on Oct. 25, just four days before the storm hit.

Under a Blizzard Warning on Monday, Fayette and Nicholas counties were waiting, watching and preparing for possible power outages and emergencies associated with Hurricane Sandy. Schools dismissed at noon and the National Park Service shut down every park unit of the New River Gorge National River until further notice.

“The wind is what worries us, especially on ridge tops,” says Fayette County Office of Emergency Services Director Theresa White. “The trees are already weak from the summer storm, and with the leaves on the trees, a heavy, wet snow could cause some trees to topple and take out power lines.”

White says power outages, especially extended ones, concern her office the most at this time. Winds were expected to pick up throughout the day on Monday.

“People should have on hand supplies to withstand at least 72 hours on their own if necessary. This would include food, water, essential basic needs including medication,” she says.

With unpleasant memories of the summer’s derecho looming large, officials aren’t taking any chances. On Sunday evening, Fayette County officials, municipal leaders, and other emergency relief organizations met to discuss storm preparations and “what if” scenarios.

“Everybody is mindful of what we went through over the summer, so it’s always good to be prepared now,” says Town of Fayetteville Superintendent Bill Lanham. The City of Oak Hill has created a Facebook page, “Oak Hill Info,” where they will post any storm-related announcements.

Roseann Berry, executive director of the Fayette-Nicholas Chapter of the Red Cross also urges residents to get ready and stay informed.

“The Red Cross is mobilizing volunteers, shelters, relief supplies and disaster vehicles to help,” she says. “The best thing families can do is to get ready now by staying informed about Sandy’s progress, listening to the advice of local authorities, checking their emergency supplies and reviewing their household emergency plan."

In Nicholas County, a lot of support but not much snow had presented itself as of Monday afternoon, according to County Commission President John Miller.

“I think the concern is going to be (Monday night) and later (Tuesday),” he says of anticipated high winds.

Both Fayette and Nicholas are currently under a Blizzard Warning, which predicts periods of low visibility and frequent 30 mph and above winds, causing white-out conditions and snow drifts. If the possibility lessens, the warning may change to a Winter Weather Warning.

Snowfall and wind will be greater along ridge tops and higher elevations. Elevations of 2,500 feet may receive 17-18 inches of snow through Wednesday.

White says the Valley district of Fayette County will likely see rain only. Areas around Danese and Meadow Bridge may see up to 2 feet of snow through Wednesday. In the Plateau district, snow and rainfall will depend on elevation, with places below 2,500 feet fluctuating between the two.

After nightfall, residents are advised to stay off the streets, keep warm and check on neighbors.

“If you can stay off the road, that would help the crews that need to be out there to clear the roads and stay on top of the things they need to do,” says White. “That would help everybody be safer.”

“We expanded our salt storage capacity for town to make sure we would be able to handle any storms that might hit us,” says Lanham. “We’re all stocked up and ready to go."

Emergency shelters in Fayetteville, Oak Hill, and Mount Hope are being prepped but there are no plans to open them at this time.

“Right now it’s a wait and see thing,” says Mike Parsons of Fayetteville Church of God, which operated as a shelter during the derecho.

“I’ve got people ready to open the center up at any moment’s notice. Our biggest concern is food. We just don’t know what to plan for,” he says.

In Ansted, Mayor Pete Hobbs says local churches are ready, willing and able to activate a kitchen if necessary.

As of yet, no town has canceled its Tuesday trick or treat hours, but White urges parents to use common sense.

“Don’t let the excitement of the holiday season override general judgment,” she says.

The Fayette County 4-H Trick or Treat for Canned Goods, however, has been rescheduled for Nov. 2 from 5 to 7 p.m.

“Early voting will continue, period, in Fayette County,” Holliday said late Monday morning. “We have a generator fired up and ready to go at the (Soldiers and Sailors) Memorial Building (in Fayetteville), and Montgomery has a generator.”

He said his office is currently working with emergency response officials on obtaining a generator to make sure voting at the Danese Community Building can also go on in the event of inclement weather.

Nevertheless, the National Park Service asks visitors and community members to avoid the campgrounds and trails of the New River Gorge National Park, where weakened tree systems from the derecho will create hazardous conditions.