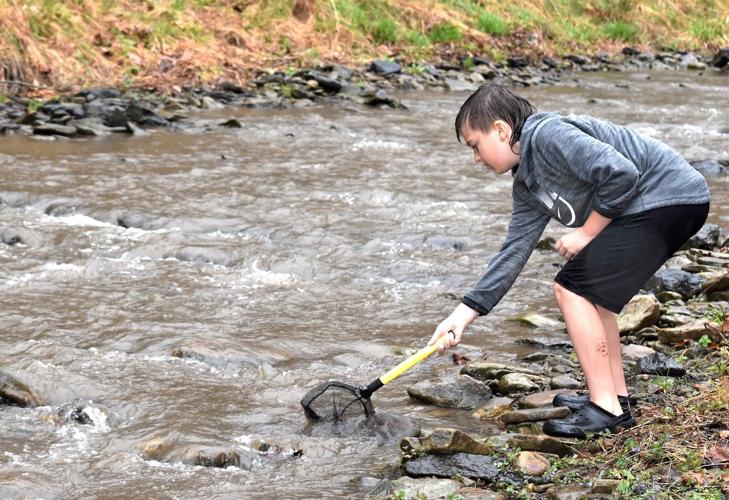 Ethan Hess releases a fry into Morris Creek on April 14 as part of the Trout in the Classroom project involving Malden Elementary School, the Morris Creek Watershed Association, Trout Unlimited and the West Virginia Division of Natural Resources. 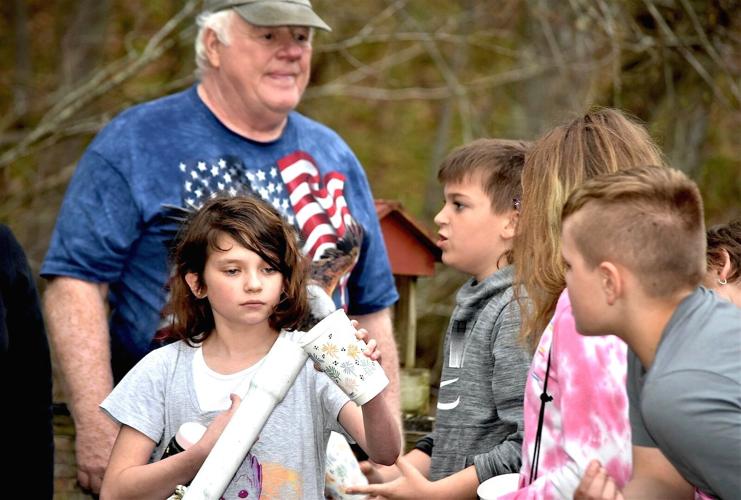 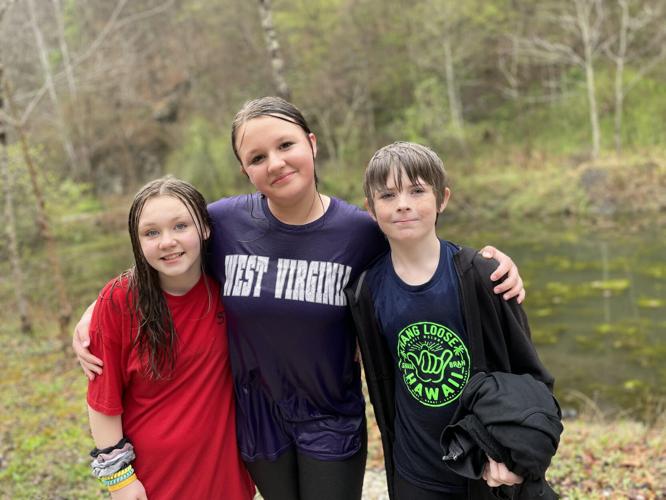 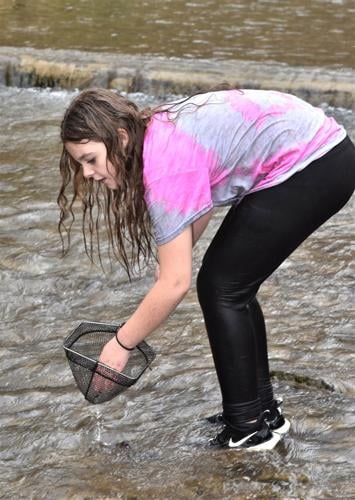 The students, including Kendra Spry, raised the trout in a classroom setting ahead of last week's release. 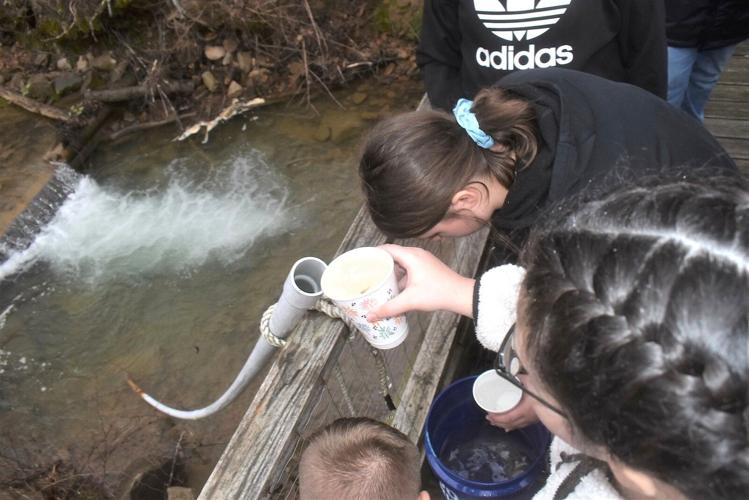 Malden students and staff released the fry into Morris Creek at various points. Samiya Dowell and Carlea Whaples are shown. 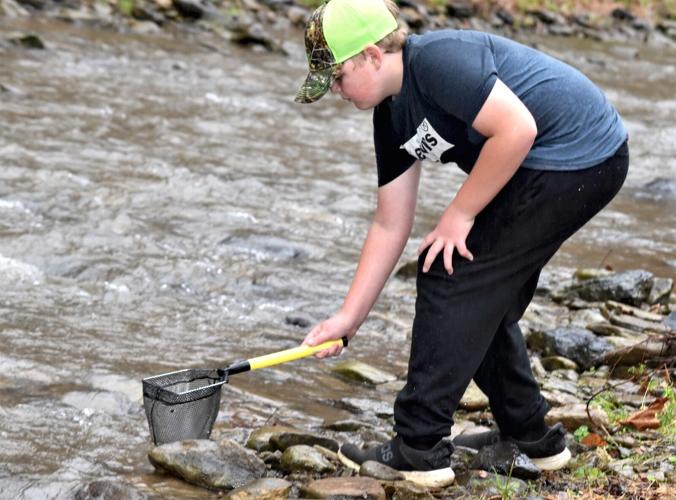 Noah King, grandson of Mike and Wanda King, two of the founders of the Morris Creek Watershed Association, joined the Malden students in Release Day. The young King is a student at Pratt Elementary who is involved in many activities of the MCWA.

Ethan Hess releases a fry into Morris Creek on April 14 as part of the Trout in the Classroom project involving Malden Elementary School, the Morris Creek Watershed Association, Trout Unlimited and the West Virginia Division of Natural Resources.

The students, including Kendra Spry, raised the trout in a classroom setting ahead of last week's release.

Malden students and staff released the fry into Morris Creek at various points. Samiya Dowell and Carlea Whaples are shown.

Noah King, grandson of Mike and Wanda King, two of the founders of the Morris Creek Watershed Association, joined the Malden students in Release Day. The young King is a student at Pratt Elementary who is involved in many activities of the MCWA.

MONTGOMERY — While bolstering the Morris Creek Watershed ecosystem, Tonya Harper says participation in the Trout in the Classroom project also creates a window for students to pursue a career in preserving life in the outdoors.

Harper, who teaches fifth grade at Malden Elementary School, helped supervise two classes of fifth-graders as they traveled up Morris Drive on April 14 to release the fry they nurtured in recent months into Morris Creek.

During the course of the program, students raise trout from fertilized eggs in aquariums, according to the WVDNR website. They are responsible for daily temperature readings, cleanings, monitoring pH levels and recording other data which allows the trout to thrive.

Harper and the Malden students braved rainy, cool conditions last week as they made the trip to the MWCA headquarters to release the fingerling trout. Harper said the school has participated in the program for nearly a decade.

"They have a blast, and they learn so much from it," she said. Beginning in the fall, the students test the water in the creek and learn about the water cycle and other factors. "They add limestone to the water, they test the pH on a couple different trips," Harper said. "We make several trips a year up here.

"And, throughout the year while they're raising the trout in the classroom, they learn that the pH has to be a certain level, the water has to be cold, they have to have a certain environment, so they have to maintain that in their classroom environment (even in the case of scenarios such as power outages.)

"They're taking care of a living thing, so there's a lot of responsibility there."

Out of the classroom and moving to the banks of Morris Creek, the students "apply the knowledge here. They plant trees along the creek bank to make sure it's thriving, they test the water and the pH, they add limestone to the stream where the water comes in from the abandoned mine, the acid mine drainage, and make sure the pH is stable."

She said students have also worked on projects with fireflies and bats over the years. "If the water's good and healthy, you can get all the other animals to come back. The water is the key part here, so they've learned that they have to take care of it and make their ecosystem and environment better."

While benefitting Morris Creek, the project has also yielded another result over the years. "It's changed the lives of many of my students," said Harper. "I have multiple students (including her daughter, who is now in high school) that want to go into that field."

Students in past classes have done more than just raise the fry as they enhance the Morris Creek ecosystem, Harper said. Some have written to lawmakers seeking support of legislation that will help further that mission. "They've taken an active role," she said. "Taking this concept now in fifth grade and seeing they can make a difference; when they become adults, they'll know they can make a difference a little at a time. They just have to put forth the effort and be passionate about it."

One of those students who has been passionate is Ethan Hess, who said he has learned a great deal about wildlife. Besides having fun, he said, "It's pretty important; it helps the ecosystem." Strengthening habitats has helped "increase the population of animals," he said.

"I like coming here because it's fun," said another student, Chris Harper. "In the school in Malden, we don't really get to do much science."

Hess and classmate Carlea Whaples have participated in the program for nearly three years, Harper said.

"We give them eggs in September or October, and they raise them up until this time of the year," said Mike King, the stream restoration chair for the watershed group. The annual project "greatly helps (trout habitat).

"It's an indicator for the water. We suffer from acid mine drainage, as most southern West Virginia folks do. We have some remediation projects in place, and we're getting ready to upgrade those. We'd like to get the water quality to a point where it will sustain the aquatics that they eat."

King says Harper "does an excellent job" guiding the students. "They do all kinds of projects in Morris Creek, not just trout."

During the day, two of the students took time to share some of the names they had given the fish, names such as Big Mac, Applebee's, Wendy's, Chad and Tiny.

Eddy Grey, president of the MCWA, said the organization was formed in the early 2000s, and the early focus was cleaning up Morris Creek by improving water quality to the point it was capable of supporting aquatic life. In the process, the watershed group became involved again with several schools in the Trout in the Classroom project.

Release day, when students put the trout they raise in the classroom into the stream, is always highly anticipated. "And, while they're here, we do a little bit of education on what the trout are going to eat, how they'll grow in this stream," Grey said. That gives the students a better overall picture of "water quality and the importance of water quality, the importance of taking care and maintaining that water quality, and also the life cycle of the stream," he said.

The trout released typically remain in the general area, with some migration, said Grey, who was joined by MCWA vice-president Happy Mitchell, among others, last week. The key, Grey said, is that "they'll live and they'll grow."

Scott Bays is the school's liaison for Trout in the Classroom, Harper said, helping secure the fish and tank and anything else needed to take care of the fish.

Glenn Nelson, a DNR District 4 fishery biologist who was on hand last Thursday, worked with Harper and Malden Elementary when he was with the West Virginia Department of Environmental Protection. "The importance is that these kids actually get these eggs in the fall, and they raise them and by the spring they get to do this," Nelson said. "What's really cool is they get to watch the whole growth until the release; of course, they like the release better. But, with that said, they actually get to see the whole growth (and begin understanding the cycle better). It really encompasses all of the water quality, but they're also engaged, because they're dealing it with every day."

Harper credited Nelson for helping the students create a passion for the project and their environment over the years.

According to Harper, the DEP helps with reclaimed land, project funding and assisting in projects which help make streams viable for the trout.

Over time, the DEP's Tomi Bergstrom, Tom Aluise and Tim Craddock also help teach the students about the water, environment, trash clean-up and other ways to help restore Morris Creek Watershed, she said.