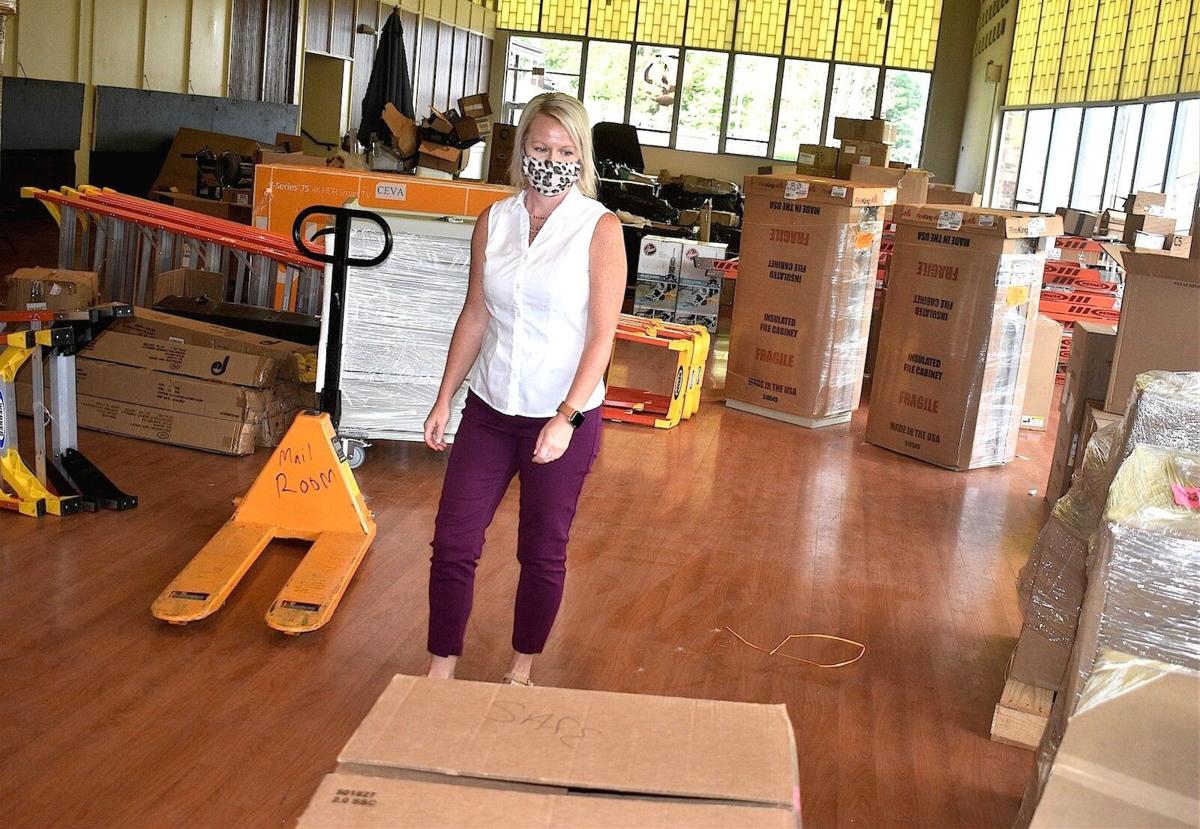 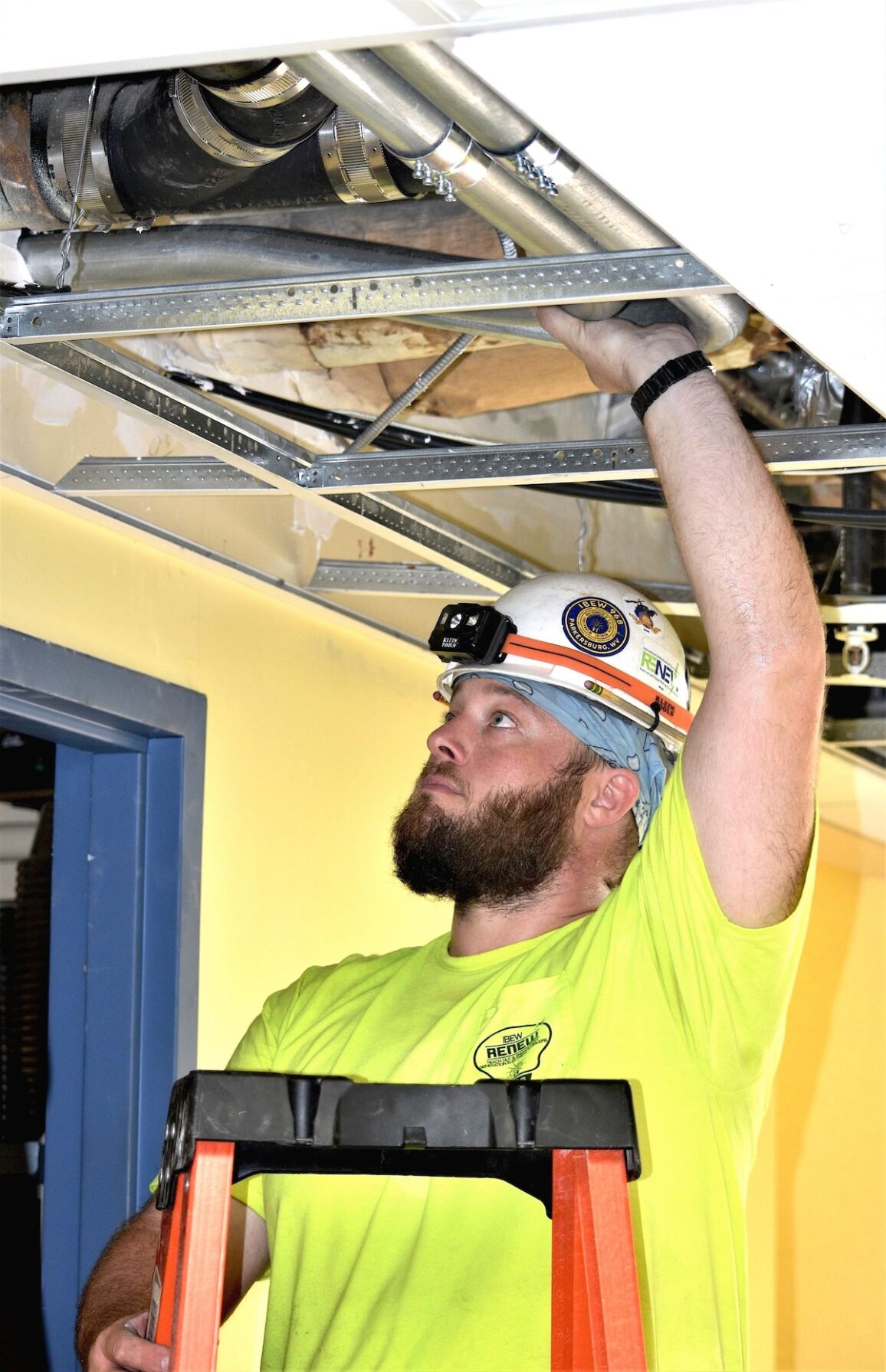 Dustin Vaughan, an employee of Burdette Electric, works in the Tech Center in Montgomery on Aug. 27. Vaughan and fellow Burdette employee Aldon Wilson, not shown, have been among those reconfiguring the facility for use by the Mountaineer Challenge Academy. 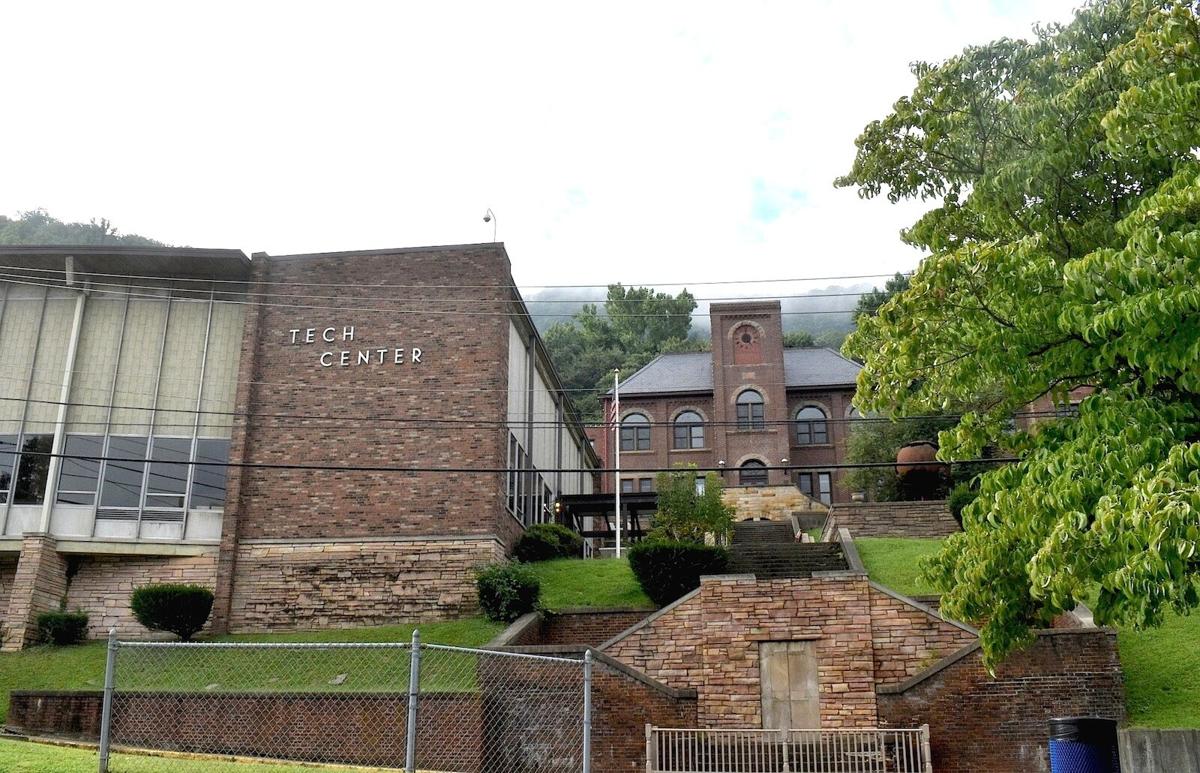 Most of the construction for Mountaineer Challenge Academy South has taken place in the Tech Center, according to Deputy Director Debi Gipson. “Classrooms and computer labs have been added where the bookstore was located, as well as on the bottom floor in the old recreation space,” she said. 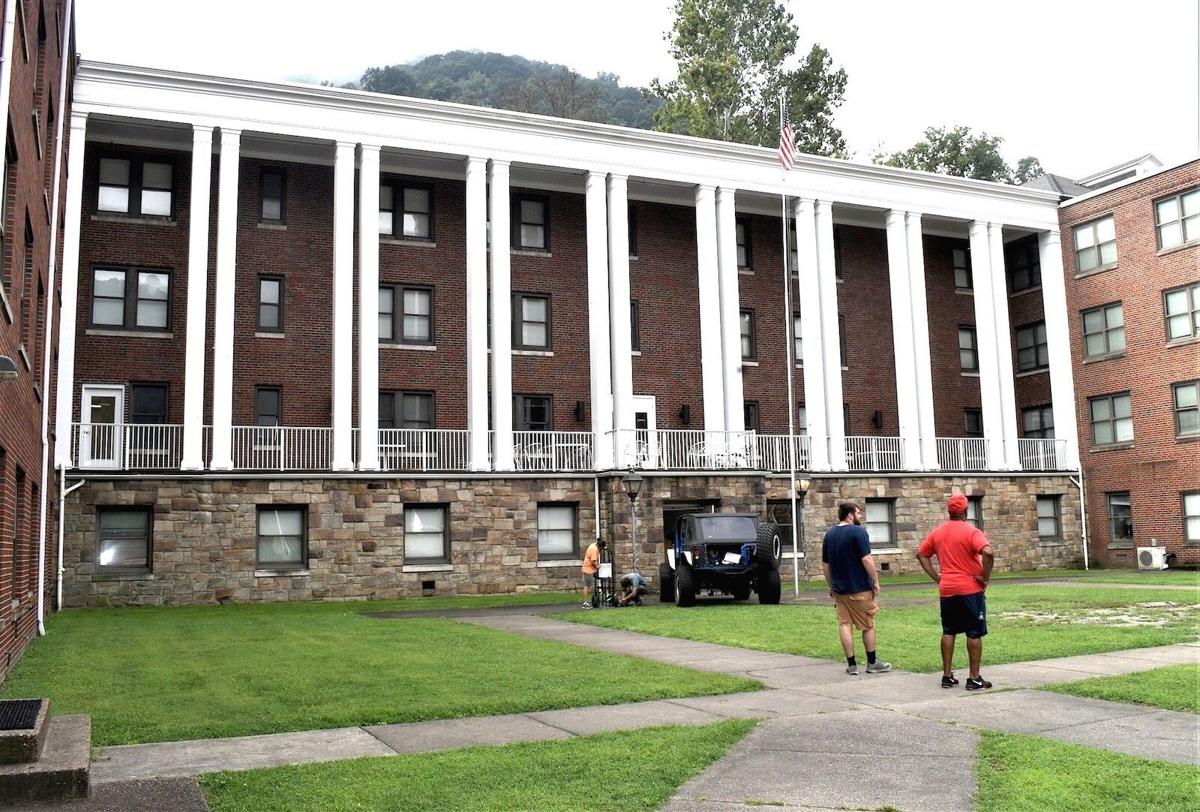 Dustin Vaughan, an employee of Burdette Electric, works in the Tech Center in Montgomery on Aug. 27. Vaughan and fellow Burdette employee Aldon Wilson, not shown, have been among those reconfiguring the facility for use by the Mountaineer Challenge Academy.

Most of the construction for Mountaineer Challenge Academy South has taken place in the Tech Center, according to Deputy Director Debi Gipson. “Classrooms and computer labs have been added where the bookstore was located, as well as on the bottom floor in the old recreation space,” she said.

MONTGOMERY — Life is being breathed into portions of the former WVU Tech.

Work is ongoing on converting Maclin Hall and the Tech Center to host Mountaineer Challenge Academy South, a program of the West Virginia National Guard, beginning this fall. MCA South is slated to receive its first class of cadets on Oct. 11, 2020. Thereafter, the academy will be on a regular schedule of two classes a year every April and October, according to Deputy Director Debi Gipson.

"As a lifelong resident of the Montgomery area, I cannot express how excited I am to see this wonderful program come to our area," Gipson said. "After seeing WVU Tech, Valley High School and the YMCA leave our area, it feels good to see something actually starting here.

"I think we will see this academy grow, and it will be something our town can be proud of and be known for. In a few short months we will see the old Tech campus come to life with marching and cadences and I hope it brings a smile when you get to see it."

MCA South plans to graduate 100 students twice a year. Each class is a 22-week residential program, during which the cadets can receive their high school diploma in a quasi-military atmosphere. That will be followed with a 12-month post-residential phase, which prepares cadets to return to their community.

Construction in recent weeks has centered on reconfiguring the Tech Center for use for the MCA program, Gipson said.

"The majority of the construction process has been on the Tech Center," said Gipson. "Classrooms and computer labs have been added where the bookstore was located, as well as on the bottom floor in the old recreation space.

"Fortunately for us, the Bears Den was in great shape and did not need renovated, and will be used as our DFAC (dining) area. Maclin Hall is our other building, which will house our logistics department, administrative offices, as well as cadet sleeping rooms."

"As of right now these are the only two buildings we have, but hope to be able to obtain some sort of partnership that includes the Baisi Center," Gipson continued. "This is a much needed building for us considering the gym floor would be a great asset to obtain for purposes of physical training exercises."

As he was about to embark on his second term earlier this summer, Montgomery Mayor Greg Ingram said the city has been in discussions to possibly take over the Baisi Center and work with MCA to allow the academy to participate in its physical training while also using the building for community activities.

"Of course, the YMCA left Montgomery, so the city is now looking into taking the Baisi Center and making it a community building and working in coordination the Challenge Academy, because they want to lease part of the building for exercise and things at 0530 in the morning, and I don't think that's gonna compete with anything the community wants," Ingram said.

West Virginia University still owns the Baisi Center. Travis Mollohan, director of state and local relations for WVU, said the university is working with the National Guard and the City of Montgomery to create a plan for a community and recreational facility. Nothing has been finalized at this time.

The Mountaineer Challenge Academy leases Maclin Hall and Tech Center from WVU. "However, we are planning to transfer ownership of those buildings to them by Oct. 1," Mollohan wrote in an email. That will ultimately depend on when the Board of Public Works can review and approve the transfer, he said.

A job fair for the academy was held on Aug. 20 at Vining Library, with emphasis geared toward locating qualified applicants for positions such as management information specialist, trade specialist, administrative clerk and counselor.

The academy will employ 58 people. Thirty-one positions have been filled as of last weekend, Gipson said.

"The main area that needs addressed at this point is for squad leaders. These individuals are highly important for the day-to-day supervision of our cadets. Due to the fact that we have male and female cadets, we need an increase in female applicants for this particular job."

According to Gipson, MCA South has employed its own teachers who will instruct students along with cadre members in order to guide them through the eight core components of the Mountaineer Challenge Academy program. Those components are: academic excellence, life coping skills, job skills, health and hygiene, responsible citizenship, service to community, leadership/followership and physical fitness.

Upon passing the TASC test, cadets will receive their high school diploma from their home school.

A typical day for a cadet begins at 5 a.m., Gipson said. Cadets typically do an hour of physical training followed by barracks maintenance. The morning and afternoon will include a variety of classes. High school equivalency examination and workplace readiness examination classes are both self-paced on the computer and traditional group instruction. These are classes in life coping, goal planning and job skills. The cadre also have classes in areas such as land navigation, first aid and leadership.

After class, cadets enjoy organized athletics and dinner. The evening is spent preparing for the next day.

During his State of the State address in January, Gov. Jim Justice revealed his administration had secured $3.3 million for the establishment of the second Mountaineer Challenge Academy, which targets at-risk youth ages 16-18. MCA North is located in Kingwood. Its first cadet class was in 1994.

On Monday, Gipson said MCA officials are discussing possible plans depending on the prevalence of Covid-19 as arrival time of the first class draws closer. "We are actually in the process of addressing those issues in accordance with the health department and the National Guard," she said in an email. "In March when the governor closed schools, MCA North sent their cadets home. It is a possibility there could be a delay in opening due to Covid concerns; however, we have not received any official word at this point."

More details on the Mountaineer Challenge Academy can be found at www.ngchallenge.org and at www.wvchallenge.org.