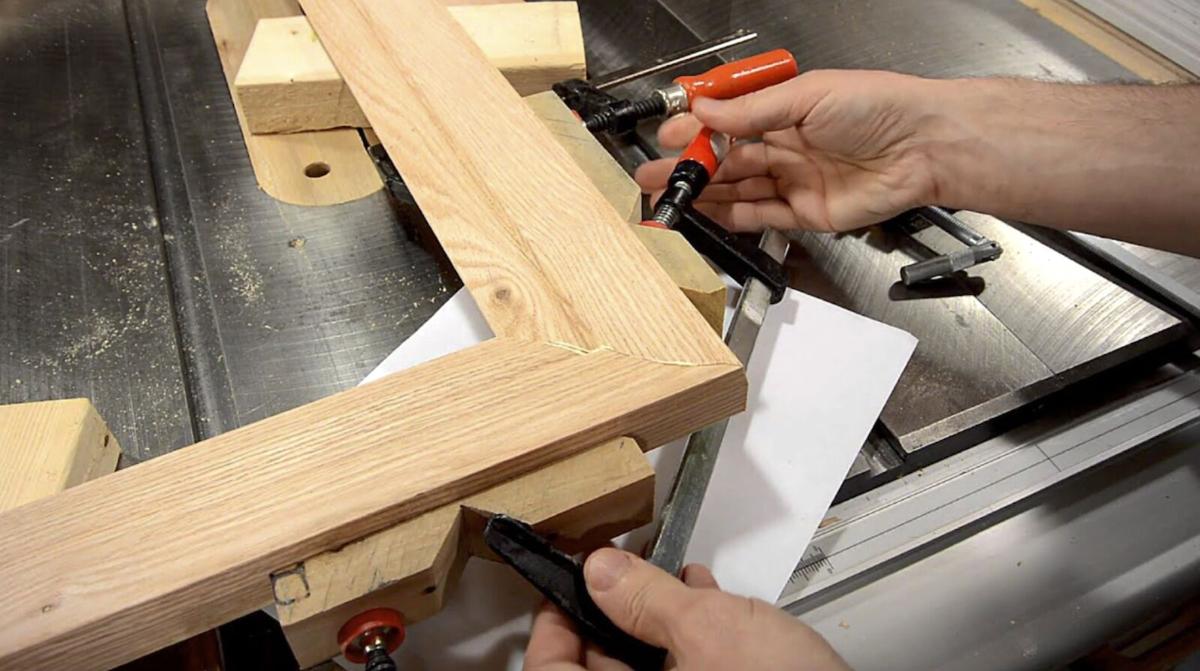 The GRID, which stands for Generate, Renew, Innovate and Design, is an 80,000-square-foot work space at BridgeValley Community and Technical College in Montgomery which is divided up into an art gallery, a small business and retail space and nine different makerspaces, including fully decked-out rooms for woodworkers, artists, brewers, potters, podcasters, screen printers and seamstresses and couturiers alike. 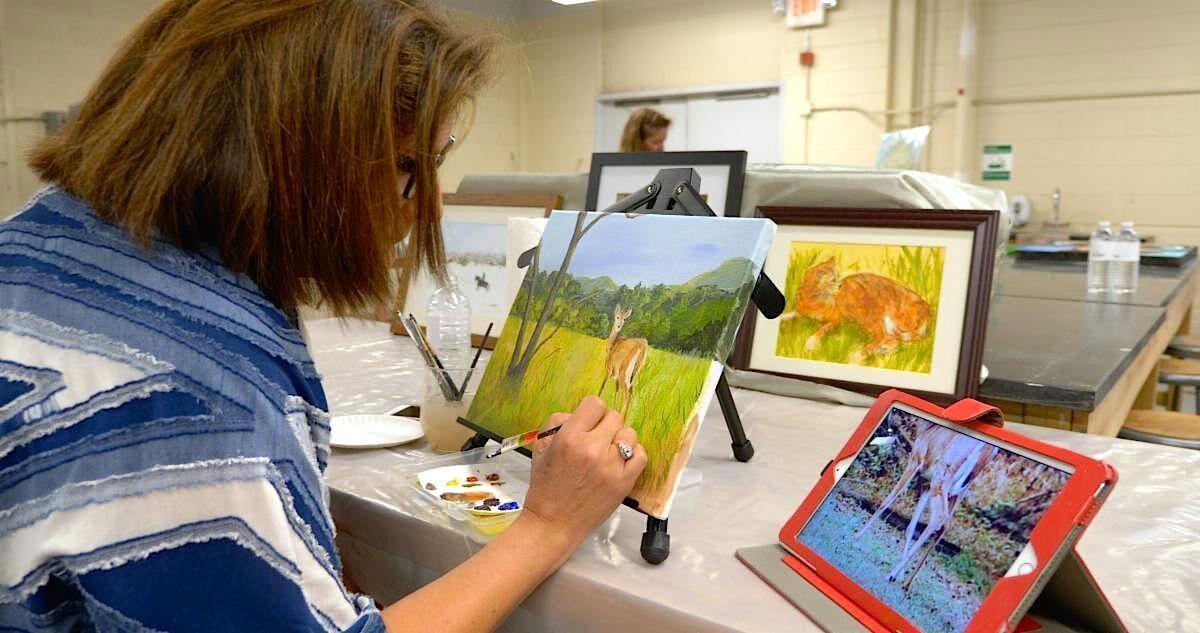 Joanie Warner works on a piece of her art at The GRID, which is at BridgeValley Community and Technical College in Mongomery. 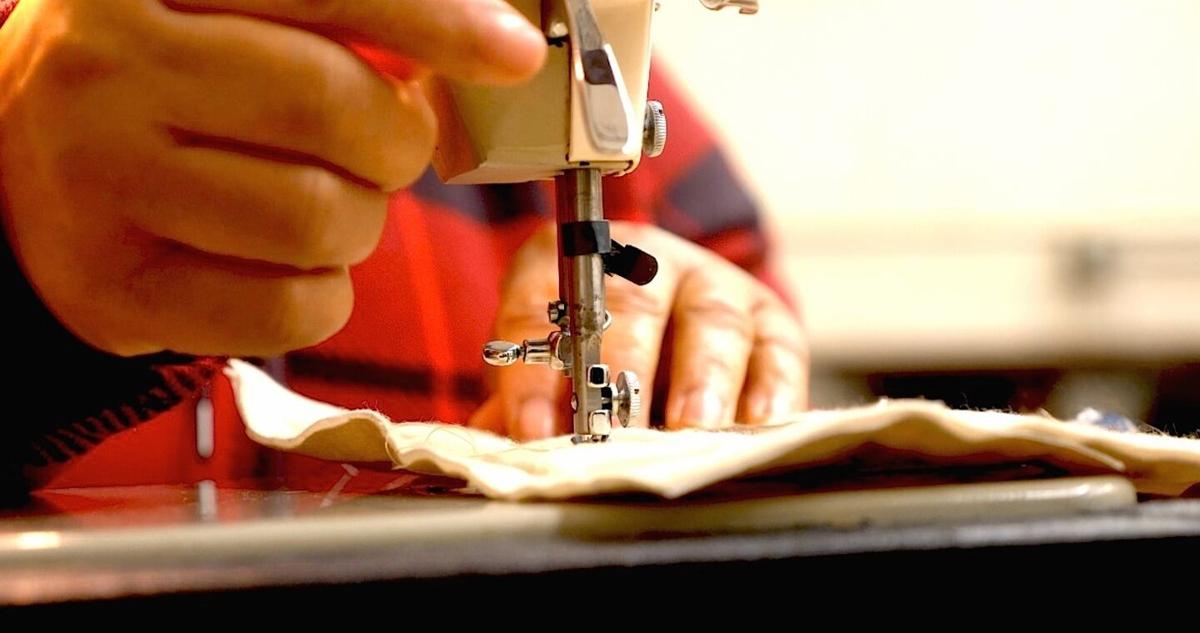 Pat Mason works on a sewing project at The GRID.

The GRID, which stands for Generate, Renew, Innovate and Design, is an 80,000-square-foot work space at BridgeValley Community and Technical College in Montgomery which is divided up into an art gallery, a small business and retail space and nine different makerspaces, including fully decked-out rooms for woodworkers, artists, brewers, potters, podcasters, screen printers and seamstresses and couturiers alike.

Joanie Warner works on a piece of her art at The GRID, which is at BridgeValley Community and Technical College in Mongomery.

Pat Mason works on a sewing project at The GRID.

MONTGOMERY — Children have Disneyland. Football fans have the Super Bowl. Artists and makers in West Virginia have The GRID at BridgeValley Community and Technical College in Montgomery.

The GRID, which stands for Generate, Renew, Innovate and Design, is an 80,000-square-foot playground for creatives and makers which is divided up into an art gallery, a small business and retail space and nine different makerspaces, including fully decked-out rooms for woodworkers, artists, brewers, potters, podcasters, screen printers and seamstresses and couturiers alike. And there is more to come.

BVCTC admissions counselor Hannah Watters rents studio space within The GRID. By day, she helps students involved with the college’s South Charleston and Montgomery campuses, and her evenings and weekends are spent on her art. The mixed-media artist works primarily in the pottery area, creating large works that reflect the psychological, emotional and environmental impact of the coal industry in West Virginia.

“My work is primarily about West Virginia. To be in another state and make art about home felt inauthentic,” Watters said. “That’s what brought me back. I was homesick.”

Although artisans use a variety of media in the space, The GRID is utilized quite practically by others. Andrew Weirick, for example, rents space to run his custom woodworking and home renovation business, Valley Renovations, LLC.

The GRID offers membership at different levels. For a full year with 24-hour access, members pay $200. For those who prefer to pay on a monthly basis but still want 24-hour access, it is $100 per month. Those who want access between 9 a.m. and 6 p.m. and want to pay monthly will be assessed a fee of $75 per month.

For Weirick, it is more affordable to lease space at The GRID to access the woodworking tools he needs for his business than to open his own shop and purchase all of the machinery. In the woodshop alone, Weirick has access to a table saw, planer, drill press, band saw, shaper, miter saw, jointer and various hand tools, as well as a finishing room.

Weirick’s output and the work of other highly skilled carpenters and woodworkers are high quality. “The furniture and cabinet makers that I’ve worked with, you wouldn’t be able to find those kinds of products in your finest box stores,” he said.

The space, not unlike the hand-made items that are produced there, is the work of the creative imaginations of the faculty, staff and administration at BridgeValley. One person in particular, according to BVCTC President Dr. Eunice Bellinger, leads The GRID and oversees the daily operations of the sprawling space.

“The glue that holds the GRID together is Pam Soscia,” Bellinger said. “She is the embodiment for whom the GRID is designed.

“She works for the college as the coordinator of the GRID and brings her expertise as a framer to the space.”

Soscia was there when BVCTC first acquired the former WVU Tech building that would eventually be transformed into The GRID. The space, which the college acquired in 2018, was dirty and empty save for a couple of decrepit machines left over from the previous tenants, officials recall. Over the years, BridgeValley has slowly added on to the space. First, there was the woodshop; then the art space was set up.

Through the team’s diligence, it has become a maker space for pottery, sewing, screen printing, 3D printing, podcasting, virtual reality and a computer lab, with more planned for the future. According to Soscia, hopes are to set up a blacksmithing forge in the future. If there’s one constant about The GRID, according to Bellinger, it is that there is always something new going on.

“We really try hard to make The GRID a useful space for our community,” Bellinger said. “Our goal is to keep it relevant, cutting edge, and to encourage innovation within the Kanawha Valley.”

West Virginia suffers from so-called “brain-drain” — the educated and talented people leave for better jobs and opportunities elsewhere. Watters studied at Columbus College of Art and Design and, within months of starting college, she found herself homesick. Still, when she finished her degree, she was hesitant to move back home to West Virginia where she was not sure if there would be a place for a creative person like her to be able to express herself and display her work. When she learned about The GRID, she knew she would be able to return home.

“I like being able to go to a studio to work. The GRID offered me some validation and hope as a working artist and not feel like I have to move to a bigger city to do my work and explore my passion,” she said.

Although BVCTC has been forced to forgo workshops due to Covid-19, the GRID will hold classes again once it is safe to do so, and that information will be posted on The GRID website. Past workshops included robotics, basket weaving, candle making, wreath making, screen printing and building birdhouses, among others. The college also plans to host robotics camps for kids and teens this coming summer. The camps and workshops will be aimed at encouraging and cultivating coding skills in elementary, middle and high school students.

Resident woodworker Joe Atha led a few workshops and classes pre-pandemic and looks forward to being able to get students again. He said since he has worked in the building, he believes that almost anyone could find something of interest in The GRID.

Beyond the actual products made, Atha said the act of making something does something unique for an individual’s soul.

“It really gives the person making the products greater self-esteem,” Atha said. “They realize they could do something they didn’t know they could.

“[Students and makers] can take pride and people can look at their work and say, ‘Hey, you did a great job!’ You don’t have to go to Amazon to buy it; you can come to Montgomery.”

For more information about The GRID and how to purchase a membership, or learn about upcoming workshops and classes, visit bridgevalley.edu/grid.

To view Hannah Watters’ work, visit her website at hwatters.com.

The author, Lauren McDermott, is with the BridgeValley CTC Communications Department.