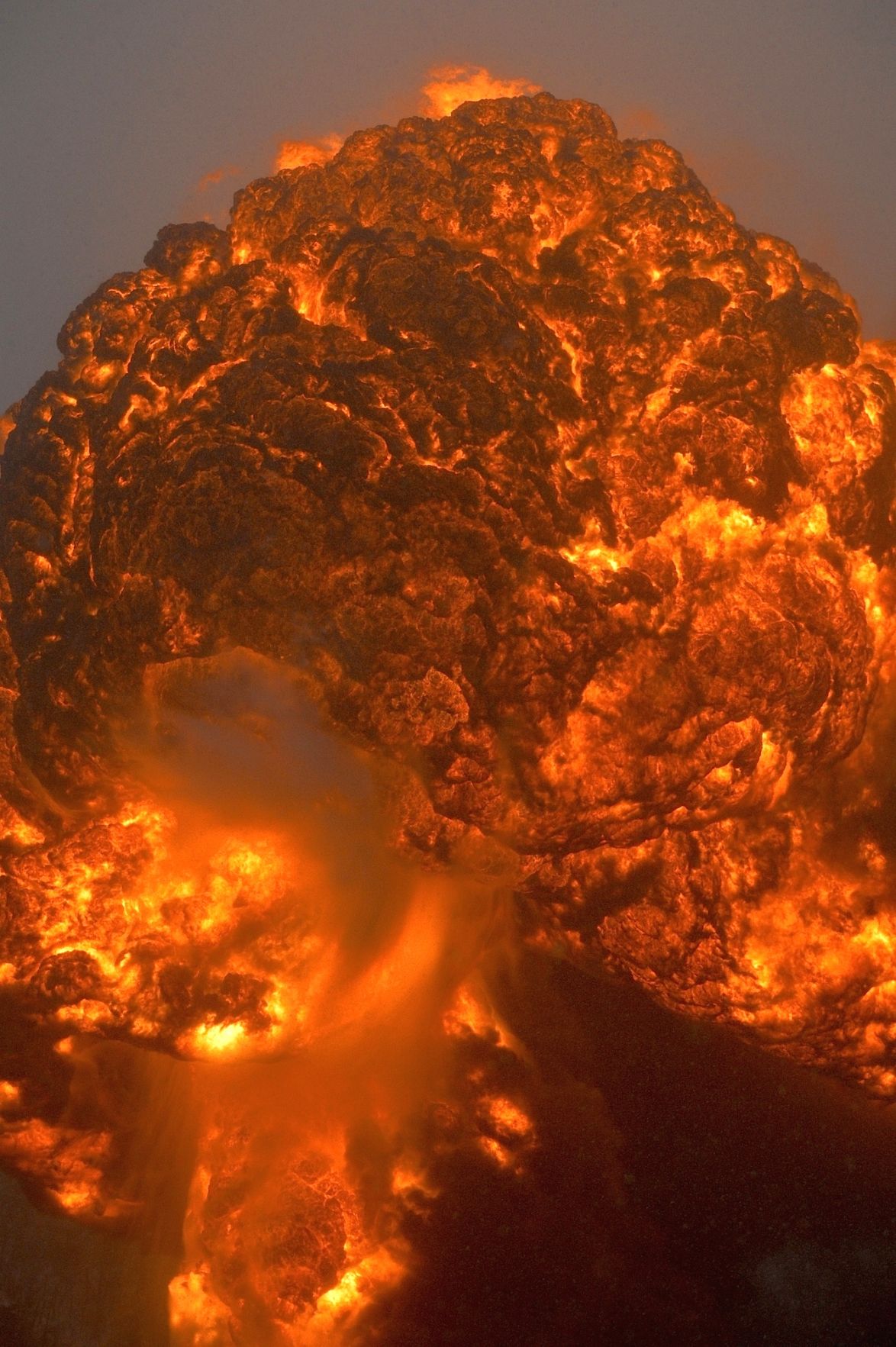 A fireball soars high into the sky over the Kanawha River Valley Monday afternoon following the derailment of 26 tank cars on a CSX train carrying crude oil from North Dakota to Virginia. 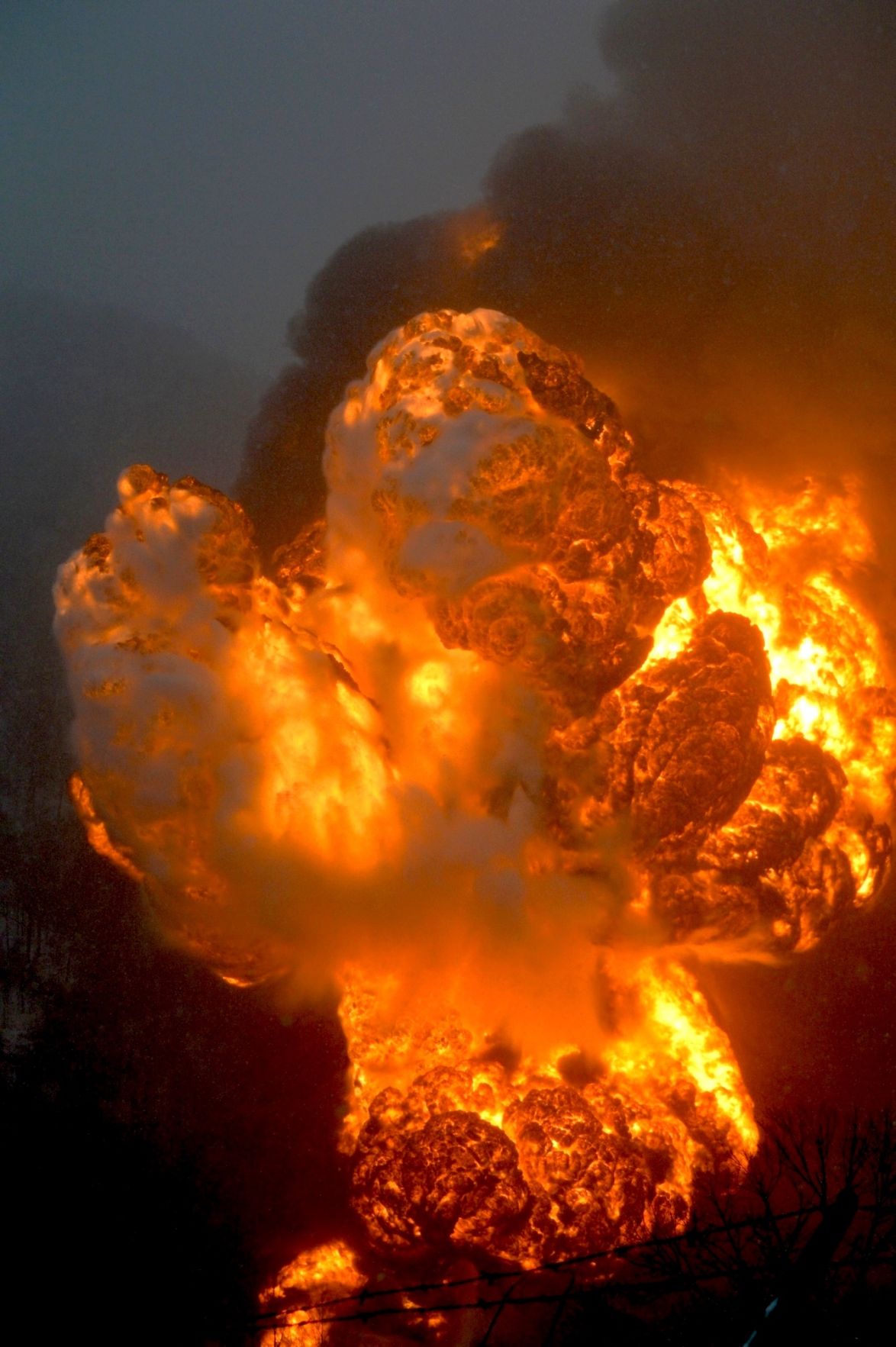 The blazes lit up the night skies on Monday, the glow of the flames reportedly seen by residents from Paint Creek to Falls View. The 19 tanks cars which caught fire were still burning off Tuesday afternoon. 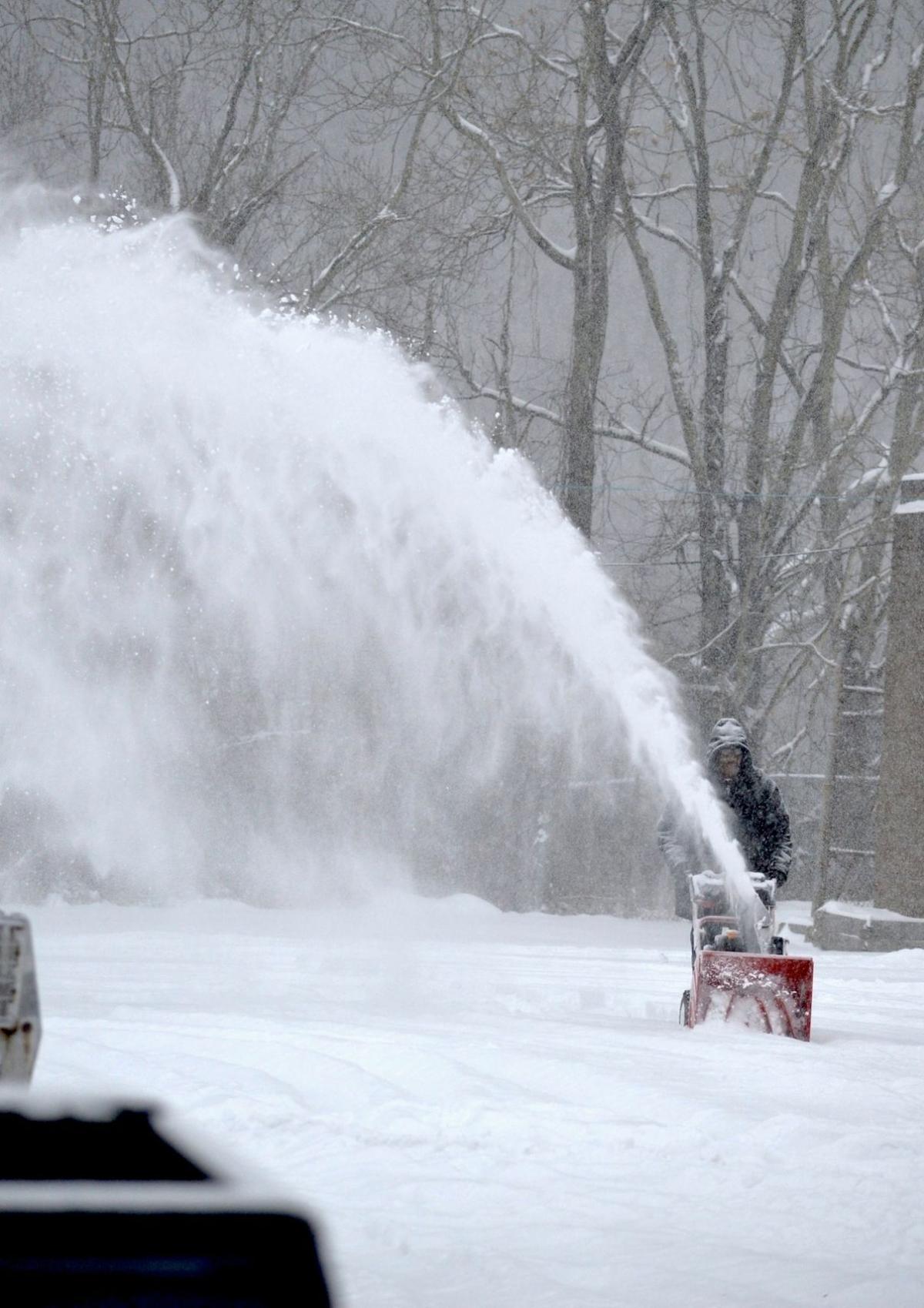 A worker at Valley High School clears snow from the parking lot on Monday afternoon prior to the school’s being opened as an emergency shelter for resi- dentes evacuated from nearby communities in response to the train derailment. The worst winter storm of the season across the UKV hampered residents and officials alike.

A fireball soars high into the sky over the Kanawha River Valley Monday afternoon following the derailment of 26 tank cars on a CSX train carrying crude oil from North Dakota to Virginia.

The blazes lit up the night skies on Monday, the glow of the flames reportedly seen by residents from Paint Creek to Falls View. The 19 tanks cars which caught fire were still burning off Tuesday afternoon.

A worker at Valley High School clears snow from the parking lot on Monday afternoon prior to the school’s being opened as an emergency shelter for resi- dentes evacuated from nearby communities in response to the train derailment. The worst winter storm of the season across the UKV hampered residents and officials alike.

A CSX train carrying crude oil derailed Monday at 1:20 p.m. along the Kanawha River in Adena Village near Mount Carbon, sending fireballs hundreds of feet in the air and hundreds of people scurrying from their homes.

Eric Oden II lives in Boomer Bottom directly across the Kanawha from the derailment.

“I was sitting downstairs and heard it. I didn’t know what it was. My sister came running downstairs screaming that a house exploded. Everybody was panicking.

“That house that exploded belonged to the grandfather of a friend of mine.”

The home owner, Morris Bounds, who was in residence at the time, was able to escape before the home burned.

First responders seeking access to the burning home, which was struck by one of the train cars according to a Montgomery city employee, and the derailment site were hampered by the major winter storm blanketing the area on Monday.

Oden said his family was among those evacuated from their homes in Boomer.

“Yeah, I’m getting out of here right now,” he said Monday afternoon.

Witnesses report other explosions after the initial derailment. Fireballs were reported several times through the afternoon, evening and over night. Residents who saw the fire estimate flames reached 400 feet.

Boomer resident Charles Keenan, 37, said he was walking along U.S. 60 about a half-mile from the derailed train when he saw one of the oil tankers explode.

“I saw a plume, an inferno, a pillar, like something biblical or wrath-of-God type stuff,” Keenan said. “I heard a big boom and a hiss, it was the fuel hissing, and then it went ‘boom,’ and I felt the heat. I was on Route 60, across the river, and I felt the heat and ran because I thought it was going to rain down.”

Keenan’s stepfather, Harry Carelli, 66, said he heard and felt “at least four” explosions from his home in Boomer Bottom, which is directly across from the derailment.

“We heard these two explosions and we always think about the Alloy plant,” Carelli said. “We didn’t dream it would be a railroad derailment. I saw all these people walking down our street to the dead end street at the bank, so I went and you could see the whole hillside over there was on fire.”

In response to the oil spill into Armstrong Creek, which flows into the Kanawha River, West Virginia American Water spokeswoman Laura Jordan said the Montgomery water treatment plant, which draws water from the Kanawha a few miles downstream of the accident, was shut down at approximately 2:30 p.m. Monday.

After a series of water tests, WVAW planned to reopen the Montgomery plant after 1 p.m. on Tuesday (Editor's note: See related story elsewhere in this edition.)

“A boil water advisory is being issued as part of the process of restarting the treatment plant and restoring full service. Customers will be notified of the advisory by automated phone calls and through the local media,” Jordan said in a press release early Tuesday afternoon.

The intake for Cedar Grove was shut down Monday, as well.

Residents with a half-mile of the derailment site were evacuated Monday and emergency shelters were opened at Valley High School, the Montgomery Fire Department, the Armstrong Creek Volunteer Fire Department, the Southern Appalachian Labor School at Beards Fork and the Falls View Community Center. CSX also booked rooms at the Holiday Lodge in Oak Hill for displaced residents.

According to Lawrence Messina, communications director for the West Virginia Department of Military Affairs and Public Safety, the CSX train was heading east from North Dakota to Yorktown, Va., and was carrying Bakken crude oil.

Fires continued to burn off on Tuesday as a series of state and federal officials and office-holders visited the site along U.S. Route 61, which remains closed to through traffic.

Tuesday morning, CSX confirmed 26 tanker cars derailed during the incident. Nineteen of those tankers were involved in the fire.

The U.S. Coast Guard and the U.S. Environmental Protection Agency remain at the site to assist with the response. The West Virginia Division of Homeland Security and Emergency Management, the West Virginia National Guard, the Department of Environmental Protection and the Department of Health and Human Resources are helping to coordinate the overall response and field requests for resources and assistance.

At this time, officials believe fewer than 800 people have been affected by power outages related to lines damaged by the initial fire. Officials estimate that between 100 and 125 area residents have been displaced from their homes temporarily as a result of this incident. State officials continue to work with Appalachian Electric Power to assess any long-term infrastructure needs and restore power as quickly as possible.

CSX has opened a community outreach center to address community needs as a result of the train derailment. The outreach center is open from 8 a.m. until 8 p.m. until further notice at the Glass-in Riverside Room at the Glen Ferris Inn on U.S. Route 60 in Glen Ferris. Local residents can call 877-835-5279 for more information or assistance.

In the aftermath of the derailment, WVU Tech canceled classes for the remainder of this week due to the water intake closure on Monday.

The school plans to resume classes on Monday, Feb. 23 at 8 a.m., according to Jen Wood Cunningham, Tech's director of university relations.

With cooperation from CSX, Mountain State University and the University of Charleston, residential accommodations will be provided to WVU Tech on-campus students in residence hall facilities in Beckley, and the Beckley Marriott Courtyard will be used as overflow space, if necessary.

Buses were on campus Tuesday afternoon to transport students to Beckley. Arrangements for food service have been made and university police and residence life staff will be on site. WVU Tech residence hall policies and the student code of conduct will be in effect on the Beckley campus.

Residence halls on the Montgomery campus closed Tuesday at 5 p.m.

WVU Tech women's and men's home basketball games scheduled for Thursday and Saturday, respectively, will not be played on campus, and the school's athletic department officials were attempting to determine an alternate location on Tuesday.

According to Dr. Jo Harris, president of the BridgeValley Community & Technical College, the South Charleston campus will return to a normal schedule on Wednesday, barring further inclement weather.

Due to the CSX train derailment in Mount Carbon and subsequent water issues, BridgeValley classes on the Montgomery campus will be canceled on Wednesday, with the aim toward staging classes Thursday, Harris said in an e-mail sent to staff and students.

On Wednesday, however, the Montgomery buildings will be open and classified and non-classified staff are asked to report to prepare for Thursday. Faculty are asked to connect with students via Blackboard or e-mail to provide communication on missed assignments. Online courses should not be affected.

With the ongoing closure of Rte. 61 in the affected area, alternative routes to Montgomery will be required for some. Employees with specific individual issues reporting to campus are urged to contact their supervisors.

Barring more bad weather, both campuses will be in session on Thursday.

Also, as his school remained in operation as a shelter and water distribution site Tuesday afternoon, Valley High School Principal Lee Loy said he was unsure when schools in the far western end of Fayette County would reopen for classes.

(Sarah Plummer and Cody Neff of The Register-Herald, Montgomery Herald Editor Cheryl Keenan and staff writer Steve Keenan and The Charleston Daily Mail contributed to this report. For updates, visit the Herald website at www.montgomery-herald.com or friend “Montgomery Herald” on Facebook.)