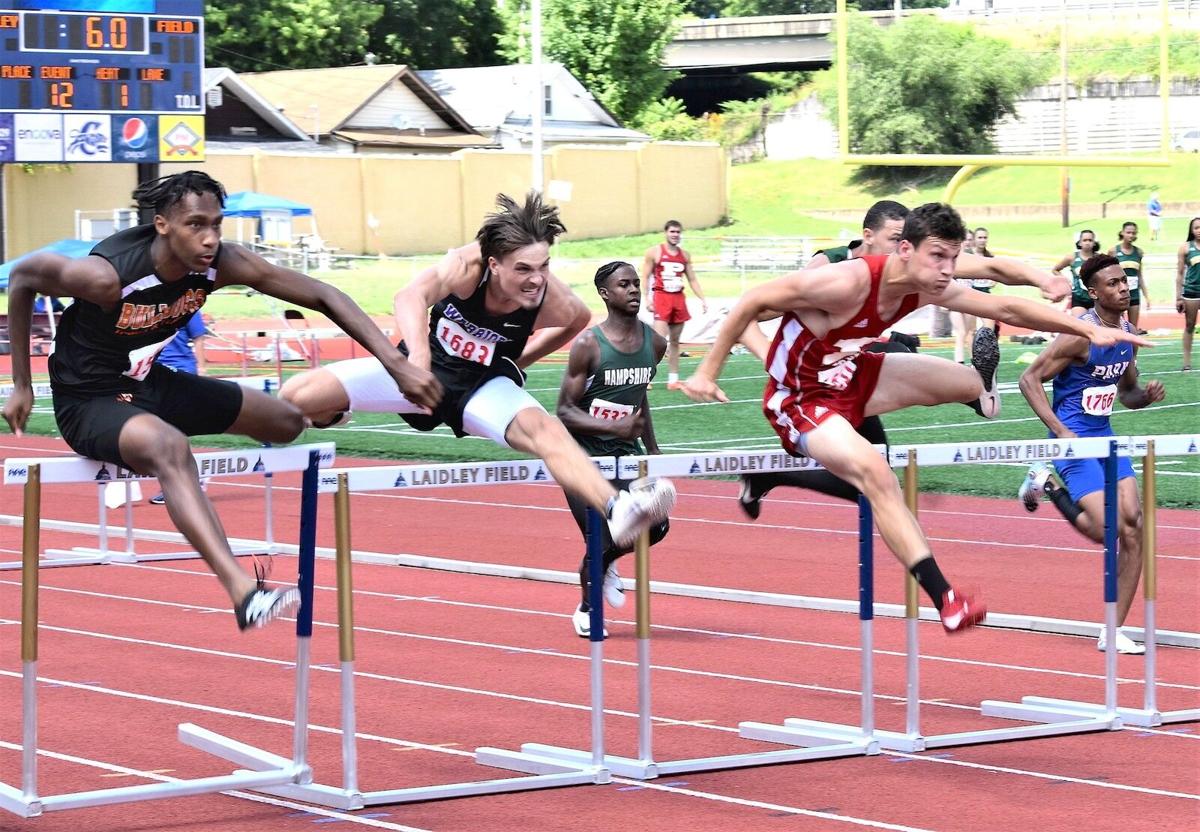 Riverside's Carson Casto, center, narrowly lost to Parkersburg's Aaron Kupfner, right, in the 110-meter high hurdles race Saturday at the WVSSAC State Track and Field Championships. Kupfner ran 14.86 seconds and Casto 14.98. Casto also placed second in the 300 hurdles (40.63) Saturday, as well as anchoring the Warriors to a third-place effort in the shuttle hurdles. 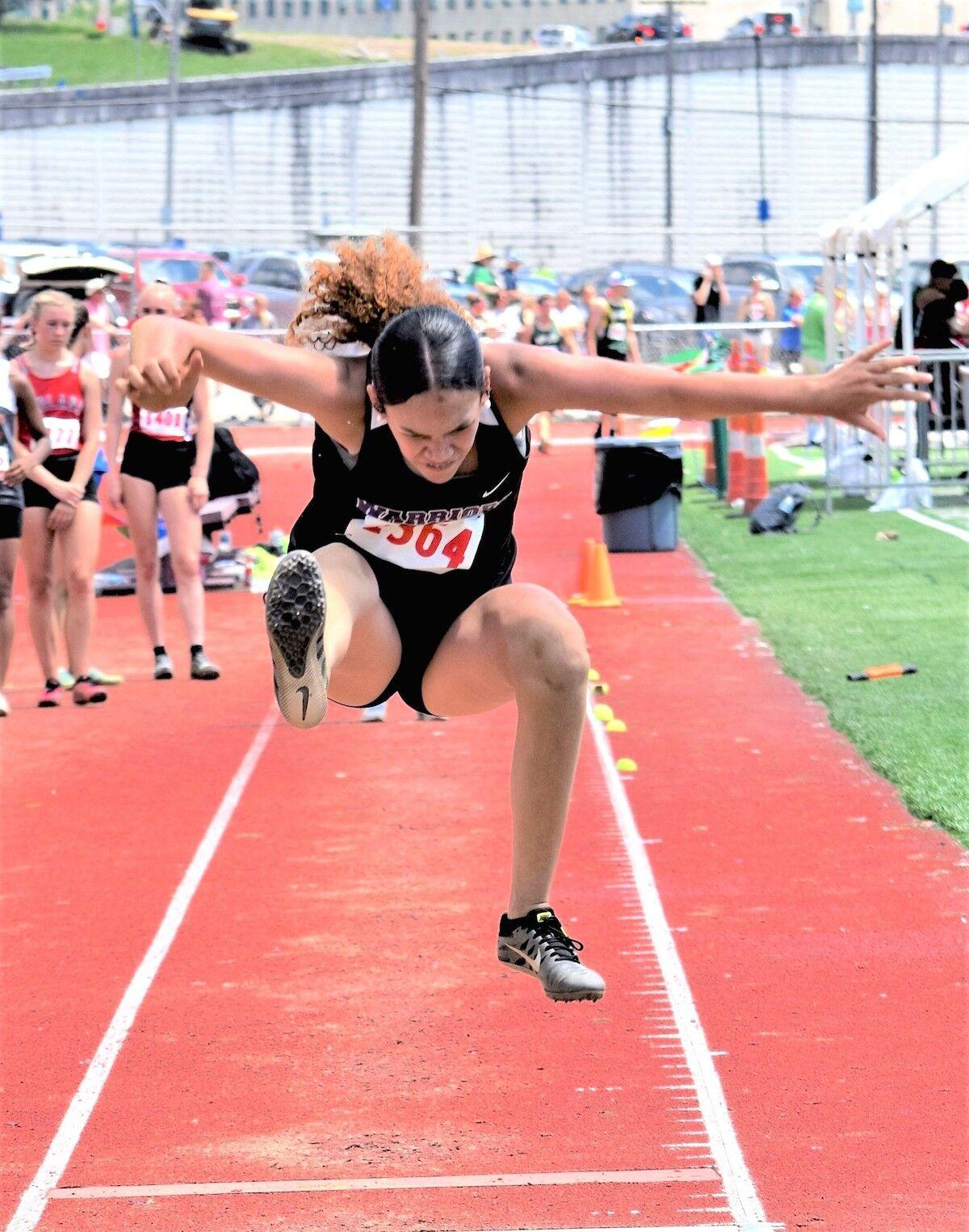 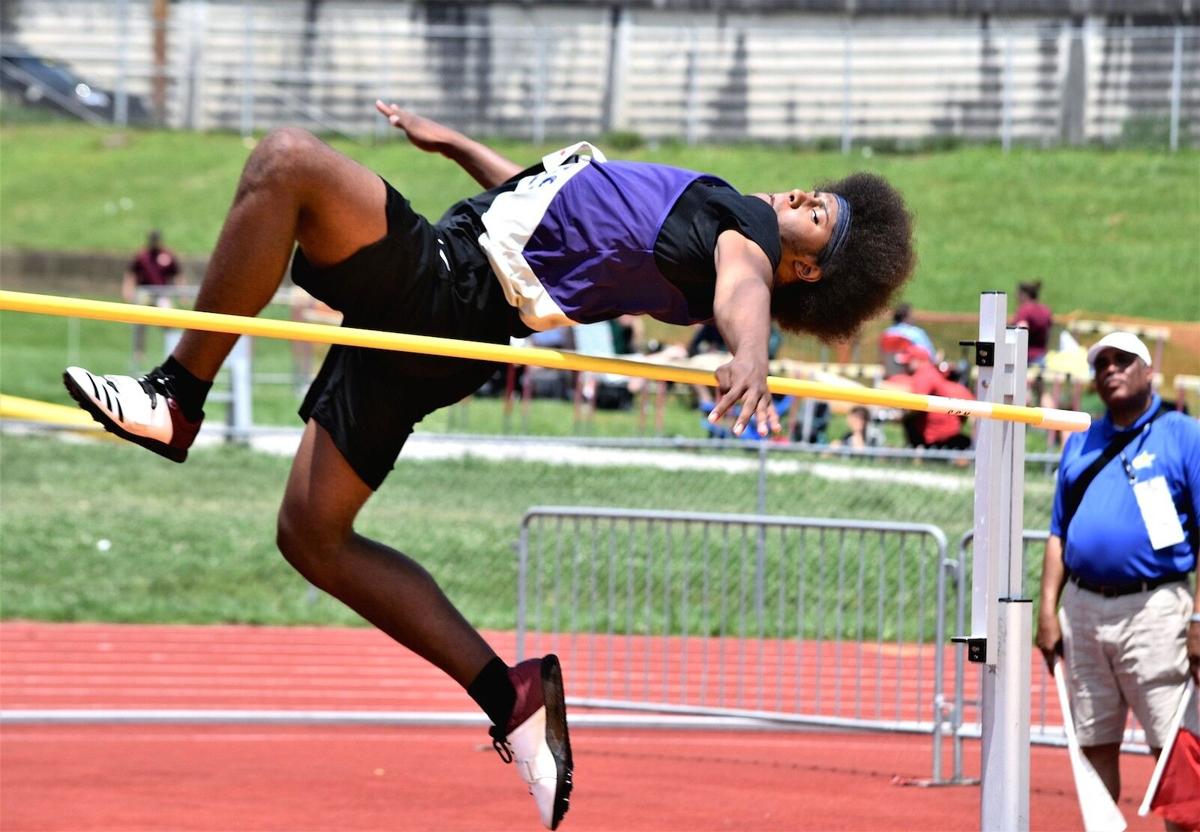 Riverside's Carson Casto, center, narrowly lost to Parkersburg's Aaron Kupfner, right, in the 110-meter high hurdles race Saturday at the WVSSAC State Track and Field Championships. Kupfner ran 14.86 seconds and Casto 14.98. Casto also placed second in the 300 hurdles (40.63) Saturday, as well as anchoring the Warriors to a third-place effort in the shuttle hurdles.

CHARLESTON — Riverside High School's Carson Casto had a busy — and productive — Saturday at the WVSSAC State Track and Field Championships.

Casto garnered two second-place individual finishes in his two hurdle events, as well as anchoring the Warriors' third-place showing in the shuttle hurdle relay. He ran a time of 14.98 seconds in the shorter race, trailing winner Aaron Kupfner, of Parkersburg, who was clocked in 14.86. In the 300 hurdles, Casto crossed in 40.63, finishing slightly behind Huntington's Noah Waynick (40.53).

"My start wasn't that good," Casto said of the 110 hurdles race. "I made up for it, but he just had the upper hand with the momentum he was gaining. You can't beat that."

The 400s and 3200s were contested in Class AAA on Friday night, with no area placers.

The triple-A portion of the meet concluded on Saturday, and one of the highlights for Region 3 teams was a bang-bang, second-place finish for the Woodrow Wilson boys in the shuttle hurdle relay as the meet neared its conclusion.

Musselman just nipped the Flying Eagles in the shuttles, a race whose state meet record of 55.86 seconds goes all the way back to 1982 and is held by a Beckley quartet that featured current Woodrow Wilson boys head coach Steve Kidd. On Saturday, the Applemen — racing in the same section as Woodrow — clocked 58.31, while Beckley crossed in 58.36 and Riverside was third in 58.52.

“We came close to getting that daggone thing,” said Kidd.

“I was hoping that we won; we worked hard all year around, trying to break the record and fight through it,” said Woodrow Wilson anchor leg Jacobe Harville, who was joined on the squad by teammates Hezekyiah Creasy, Keynan Cook and Ty’lai Kimball. “We fell short at the end.

Class AAA team champions were the Jefferson girls and the Parkersburg boys.

• The Beckley girls got a sixth-place effort from Kyndall Ince in the long jump (15 feet, 8 1/2 inches).

Daniel Reed barely missed out on one state title in Friday’s Class AA portion of the WVSSAC State Track and Field Championships.

The Westside High School senior wasn’t going to let another slip away.

Reed leaped 21 feet, 6 inches to place second in the long jump as the meet unfolded at the University of Charleston Stadium’s Laidley Field. His best effort came up just shy of Sissonville’s Braedon Murray, who logged a winning jump of 21-9 1/2.

Reed then moved over a few yards to the high jump pit, where he proceeded to claim the Class AA state championship by clearing 6-0 on his second try at that height. Reed, the lone participant to clear 6-0, unsuccessfully attempted three clearances at 6-2, but he still walked away a champion for the Renegades.

“I’m pretty excited about the high jump, not so much excited about the long jump, because if I’d have gotten my footing right, I’d have been a lot further,” said Reed, who plans to study respiratory therapy at Marshall University.

In the long jump, he explained that he moved back somewhat on his approach “to get my steps right,” but “those jumps would have been a lot further, I believe, but I scratched. But I’m okay with second (even though) I really wanted to win.”

Following the high jump victory, he said, “I missed all three at 6-2, but got my second attempt at 6-0, so I’m proud of that. I could have went a lot higher, I feel like, but it was wet and damp.”

Later in the meet, Region 3 had two other individual champions.

Bluefield junior Jacorian Green got a little redemption of his own in the 200-meter dash final. After placing third in 11.21 seconds to champion Ethan Bowens (Wayne) and runner-up Tristan Lawson (Oak Glen) in the 100 during a driving rain, Green turned the tables later in the meet by crossing the finish line first in the 200 in 23.0, leaving Bowens (23.03), Lawson (23.46) and the other finalists in his rear view mirror.

“I didn’t (expect) I would get it, or even be close,” said Green, who struggled with a sore foot as the race progressed. “I thought he (Bowens) got me at the end.”

Green just completed his first year of running track for the Beavers. “I was just so focused on football,” he said, “and I didn’t think I had the speed to run with these other people.

“I didn’t think I was going to like it, but it turns out I love track.”

Nicholas County sophomore Natalie Barr also stepped to the top of the victory podium Friday. She used a frantic push down the final stretch to overcome the leader, PikeView’s Erin O’Sullivan, and capture the 800 in 2:24.51. O’Sullivan was second in 2:25.49.

“I wasn’t sure how the race was going to go, because I didn’t start out right where I wanted to,” she told media members. “Usually I try to have the best kick I can.

“I was feeling pretty good. In my head, I was thinking let’s just try to get second and hold this position. I didn’t think I had a chance at all of getting first, honestly, the whole race.”

Barr’s teammate, weights specialist Taylor Winebrenner, a senior, supplemented her teammate’s efforts with a pair of runner-up finishes on the day. First, she placed second in the shot put with a best throw of 35-11 1/2, slightly off her personal best of 36-9 1/2. She followed that up with a second-place showing of 110-10 in the discus.

In both events, she finished behind Point Pleasant’s Addy Cottrill.

“I’m pretty pumped,” Winebrenner said. “I wish I could have won, but she’s a great thrower; she’s a sweetheart.”

The extra work helped her add several feet to her production in the shot, she said. “So that was pretty good. It (missing the 2020 season) wasn’t great but (there were) definitely good aspects to it.”

On the boys side, Point Pleasant had a winning team total of 86 points, and Winfield was runner-up with 74. Bluefield placed 10th with 20 points, and Westside was 11th with 18. Shady Spring tallied 11 to finish 13th, and Nicholas County and PikeView scored five points and one point, respectively.

• The Independence girls crossed the line fifth in the shuttle hurdles (1:11.90).

In Class A, team champions were the Williamstown girls and the Doddridge County boys.