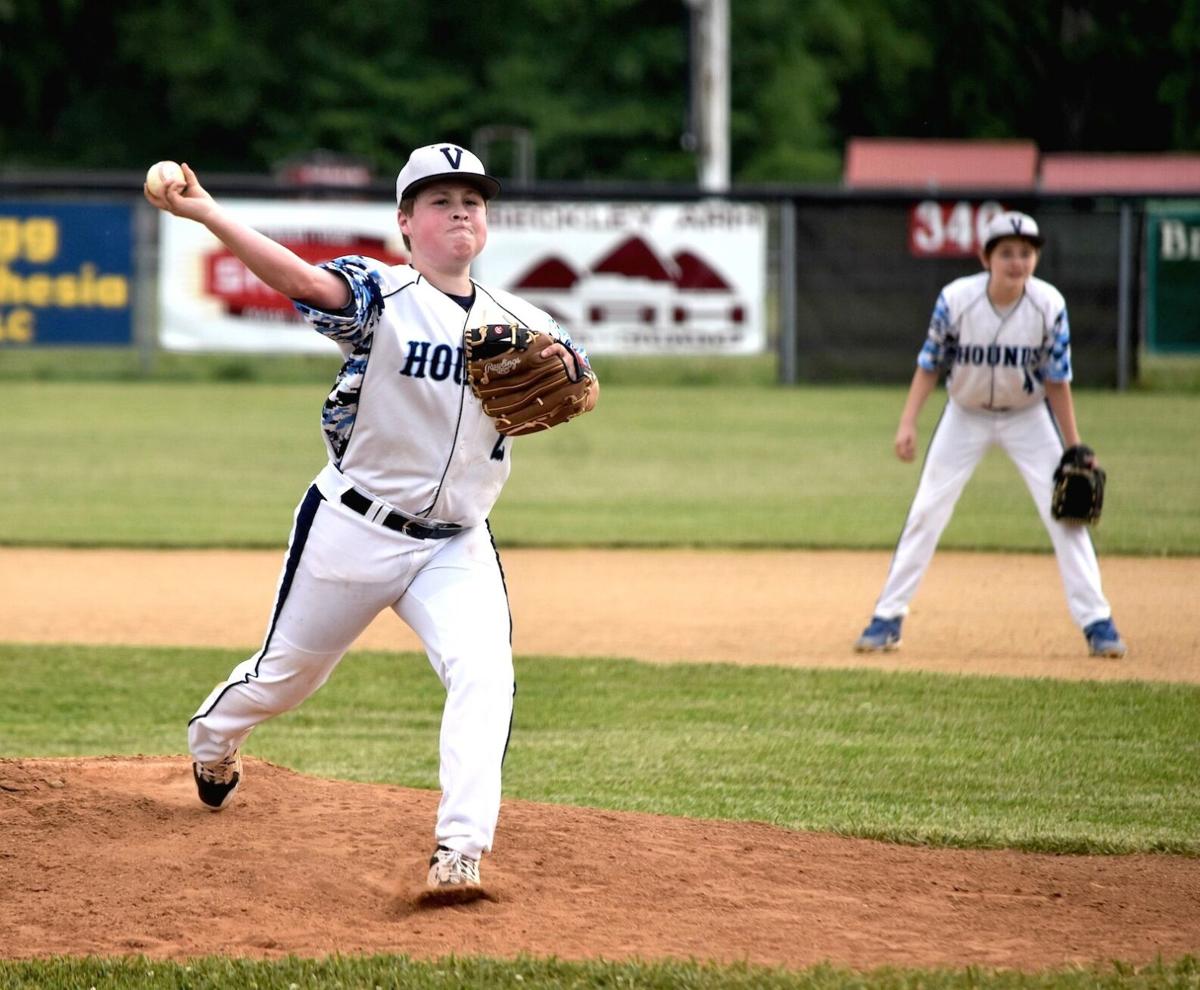 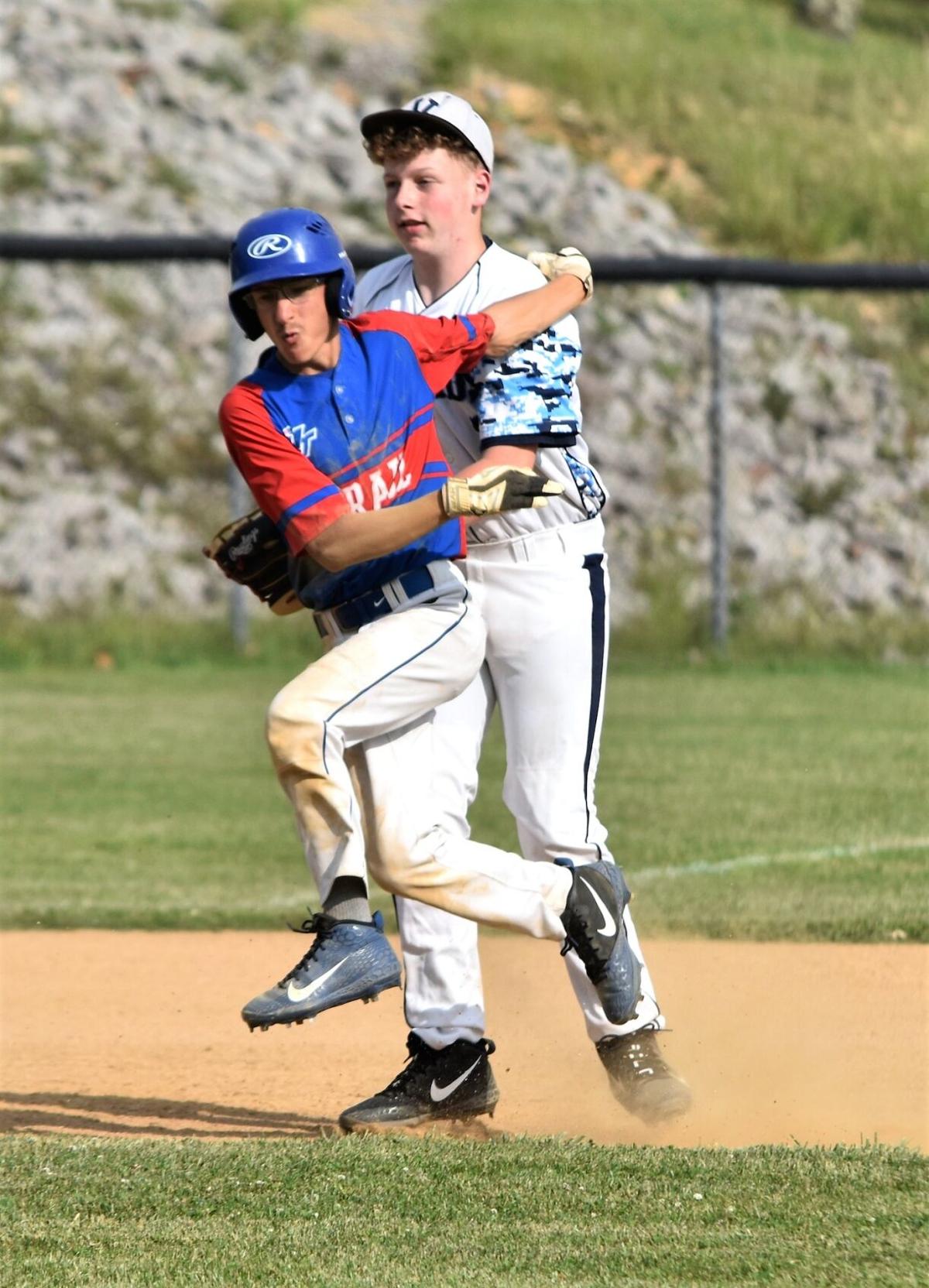 Valley's Luke Myers tags out Midland Trail's Seth Sizemore as he tries to advance to third base. 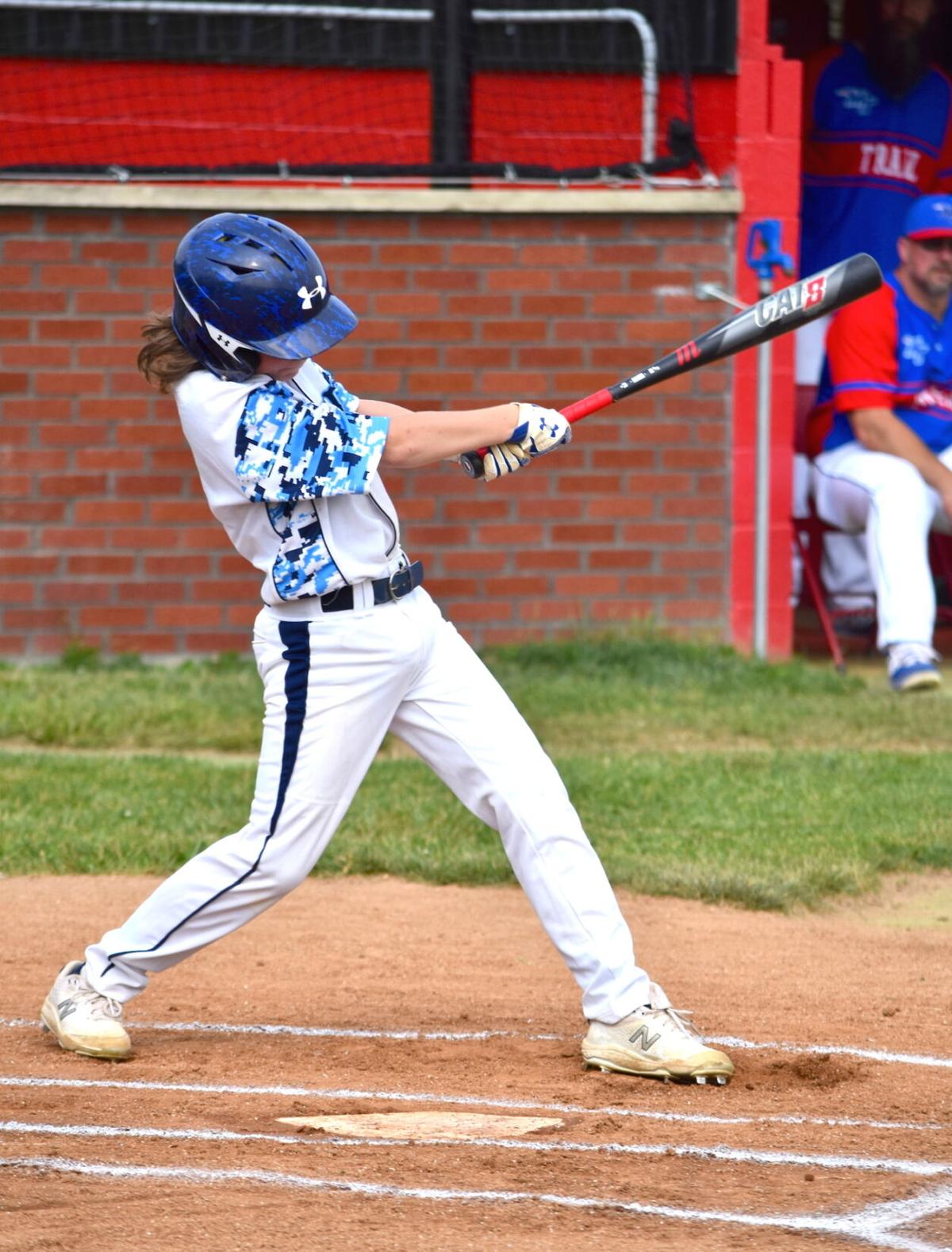 Valley's Brayden Arthur follows through on a base hit against Trail. 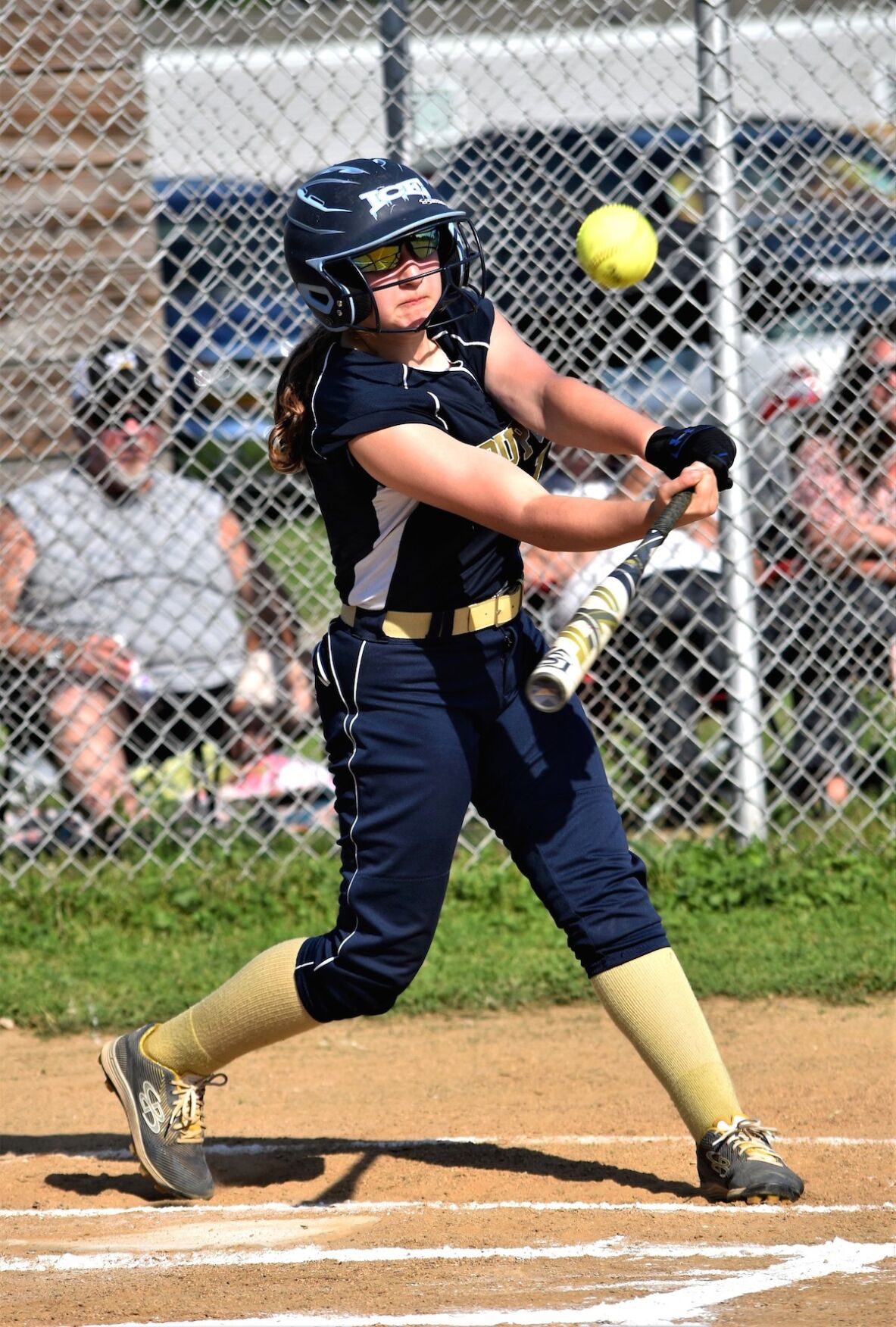 Riley Smith raps a base hit for DuPont Middle in its 12-2 win last week over East Bank. 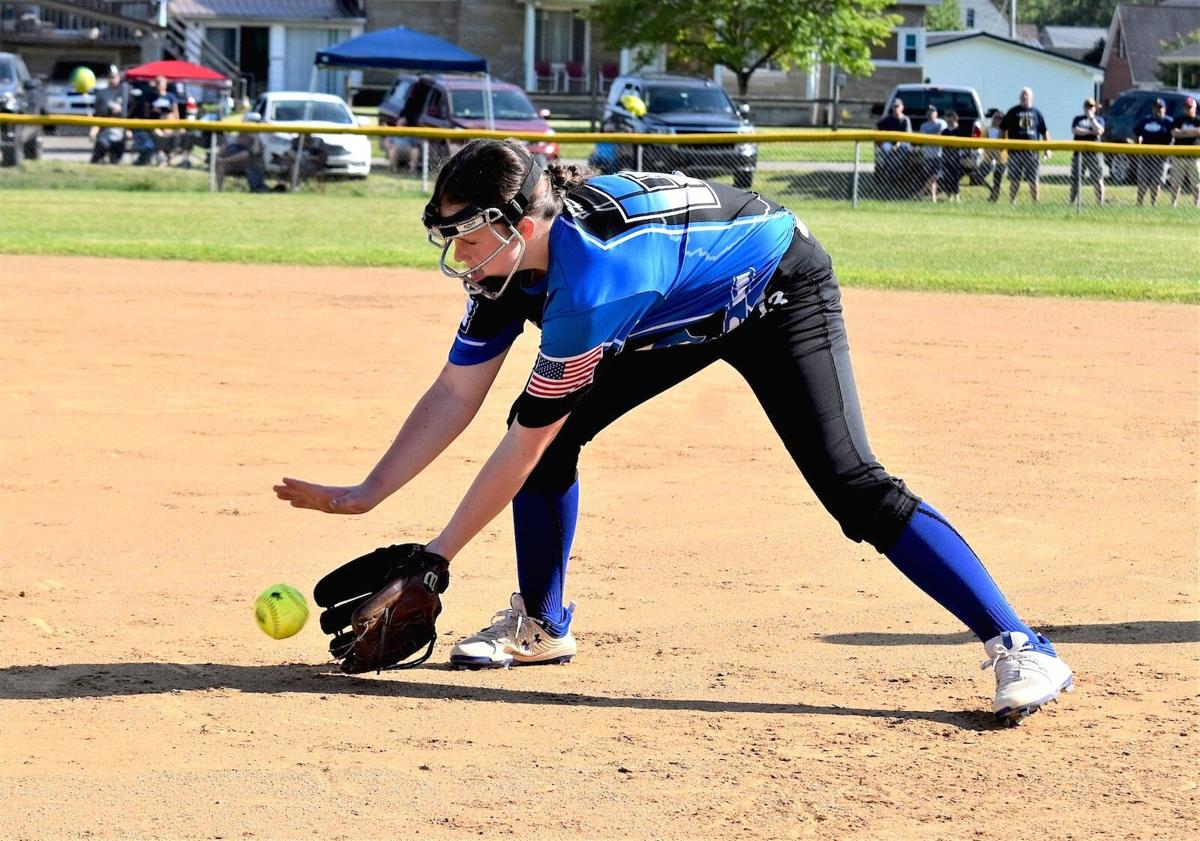 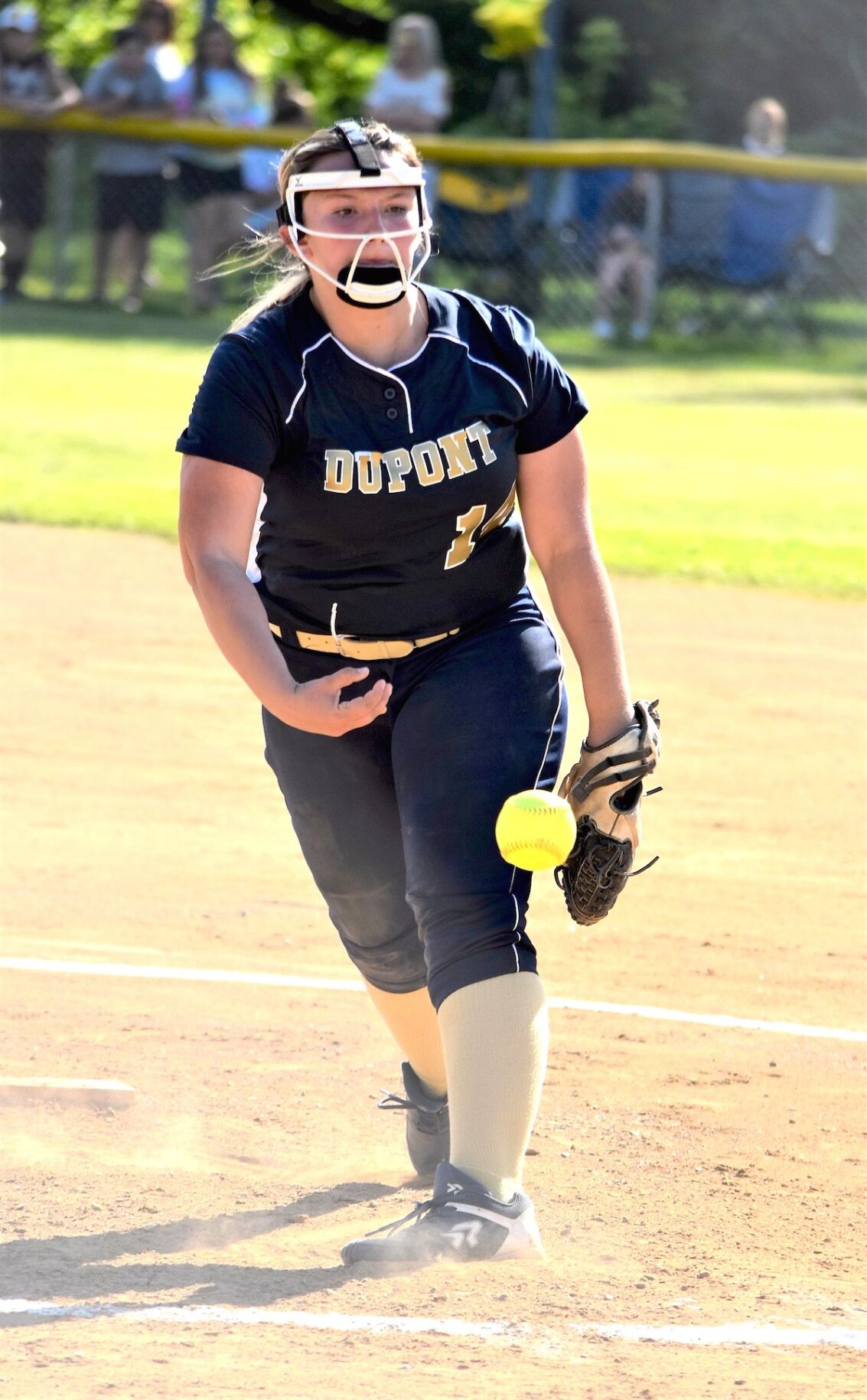 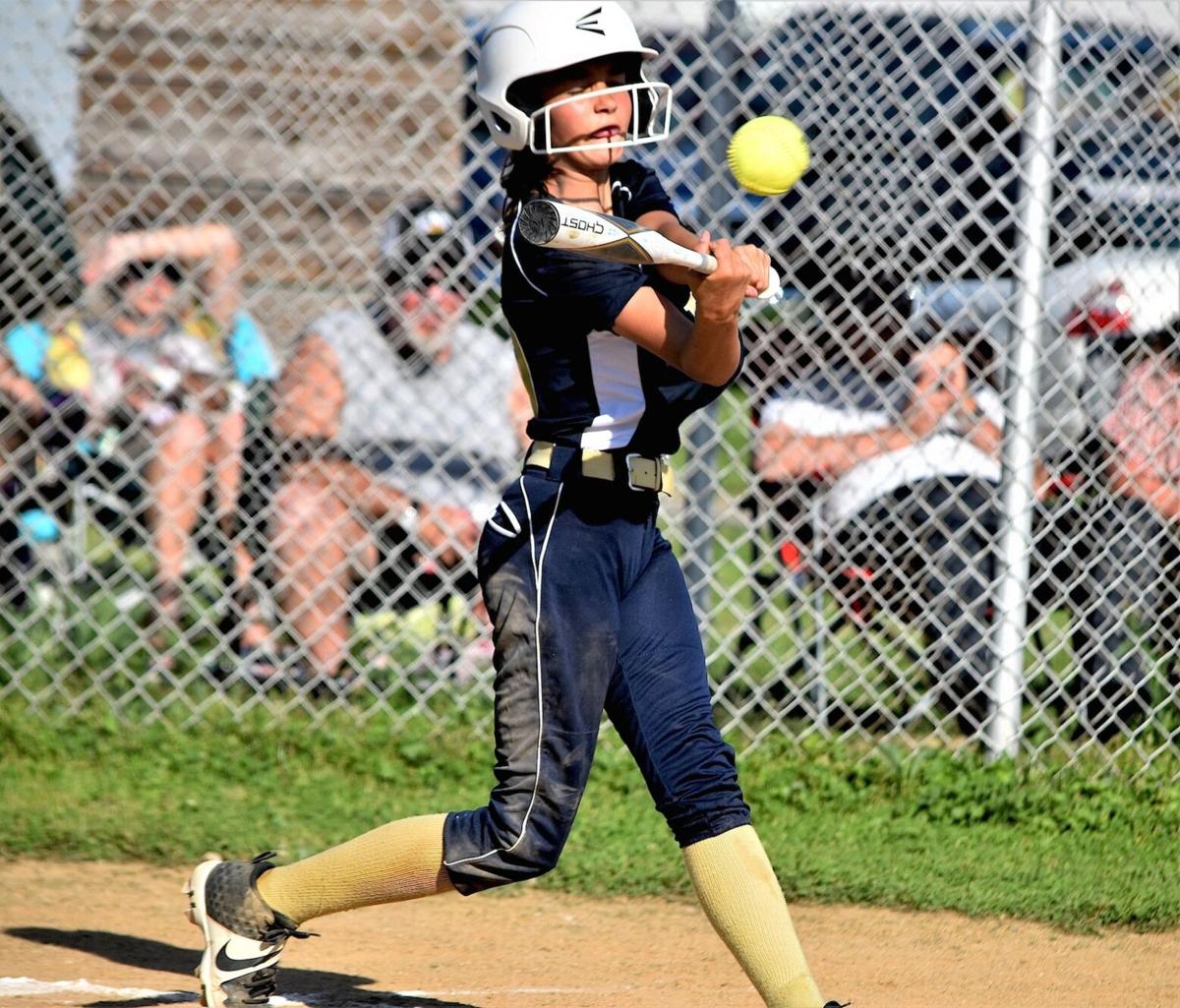 DuPont's Baylee Eplin lifts a base hit to center field.

Valley's Luke Myers tags out Midland Trail's Seth Sizemore as he tries to advance to third base.

Valley's Brayden Arthur follows through on a base hit against Trail.

Riley Smith raps a base hit for DuPont Middle in its 12-2 win last week over East Bank.

DuPont's Baylee Eplin lifts a base hit to center field.

OAK HILL — Fayetteville built up a 4-0 lead then solidified it with nine late runs to post a 13-4 conquest of Oak Hill in the finals of the Fayette County Middle School Baseball Tournament on Tuesday, May 25.

In the third-place game, Midland Trail registered a 15-5 win over Valley in five innings.

The next night, the Midland Trail Middle girls won the Fayette County Middle School Softball Tournament by nipping Fayetteville, 10-9, in the final.

The Pirates had advanced to the title tilt with a 19-2, three-inning victory over Valley.

For the Pirates (10-4) in the boys championship outing, Will McGraw was 1-for-4 with a double, and he drove in four runs on the evening. Teammate Cole Nelson tripled and knocked in two runs in four at-bats. Thad Brown had two RBIs and scored four times, and J.D. Mauritz (1-for-3) and Dustin Harrison had one RBI each. Josh Delung and Xaylen Johns were both 2-for-3.

Oak Hill's Aiden Smith was 2-for-4 with a two-bagger and an RBI. Also, Owen Grose (RBI) and Carson Treadway were both 2-for-3, Carter Reid and Terry Elswick each had a base hit and one RBI, and Jackson Gray produced a single.

Mauritz, the tourney MVP, gained the pitching win. He struck out seven and surrendered seven hits and four earned runs in 5 1/3 innings. McGraw relieved, striking out three and yielding two hits in 1 2/3 innings for the save.

In the softball championship game, Midland Trail scored twice in the bottom of the sixth inning to take a two-run lead, then Fayetteville could push across just one run in top of the seventh, and the Patriots walked away with the one-run verdict.

In first-round baseball tourney games from May 24:

For the Pirates, J.D. Mauritz was 2-for-3 with a home run, a double and three RBIs to lead the way. Thad Brown was 3-for-4 and drove in two runs, Will McGraw was 1-for-1 and had a pair of RBIs, Cole Nelson was 2-for-5 with a two-bagger and an RBI, Dustin Harrison was 2-for-3 with a double, Cole Brandstetter and Josh Delung were both 1-for-2, and Ryan Fink, Brayden Hunt and Levi Shrewsberry knocked in a run apiece.

For the Greyhounds, Luke Myers was 1-for-2 with one RBI, Semi Politino and Brayden Arthur were each 1-for-2, and Bradden Tatum drove in a run.

In the other game, Oak Hill got by Midland Trail easily, 15-1.

For the Red Devils, Carter Reid was 3-for-3 with a double and four RBIs, Saylem Blake was 3-for-3 and drove in four runs, Aiden Smith was 2-for-3 with a triple and one RBI, Jackson Gray was 2-for-3, Terry Elswick and James Ludwig were both 1-for-2 with an RBI, Owen Grose and Antoine Hicks each had a single, and Carson Treadway knocked in a run.

Aidan Foster was 2-for-2 and had an RBI for Trail, and Ivan Perdue was 1-for-3 with a double.

Grose struck out three and gave up three hits to earn the pitching win for Oak Hill.

The DuPont Middle School Panthers posted a 12-2 victory over visiting East Bank in softball action on May 19.

DuPont pushed across eight runs in the first two innings to gain control over the Pioneers.

For the Panthers, Riley Smith was 3-for-3 with a double and three RBIs, Baylee Eplin was 1-for-2 with a triple and one RBI, and Keelee Harrison-Dickerson drove in three runs. Also, Kensie Pittman was 1-for-1 with a double and an RBI, Addisyn Fidler was 1-for-2 and knocked in two runs, Ryley Joe Chapman and Jill Campbell were both 1-for-2, and Madison Young stole three bases.

Chapman gained the pitching win for DuPont. She struck out four and allowed four hits and two earned runs while issuing no walks.