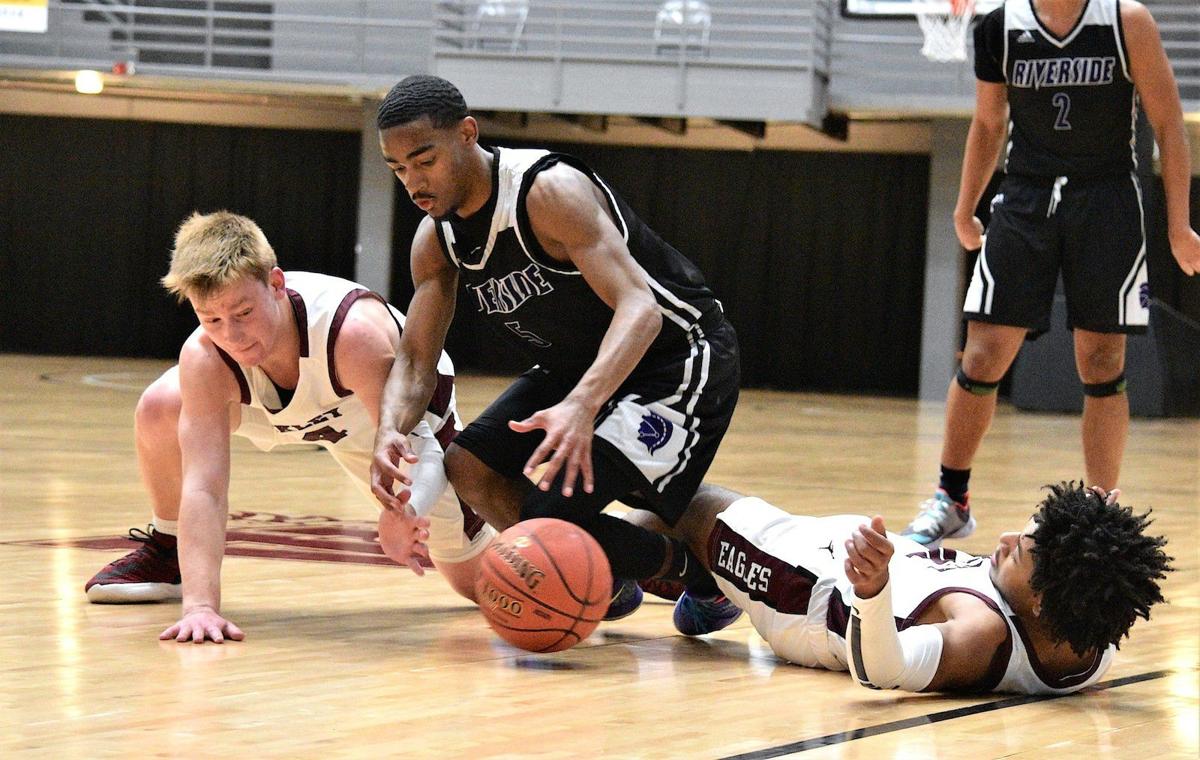 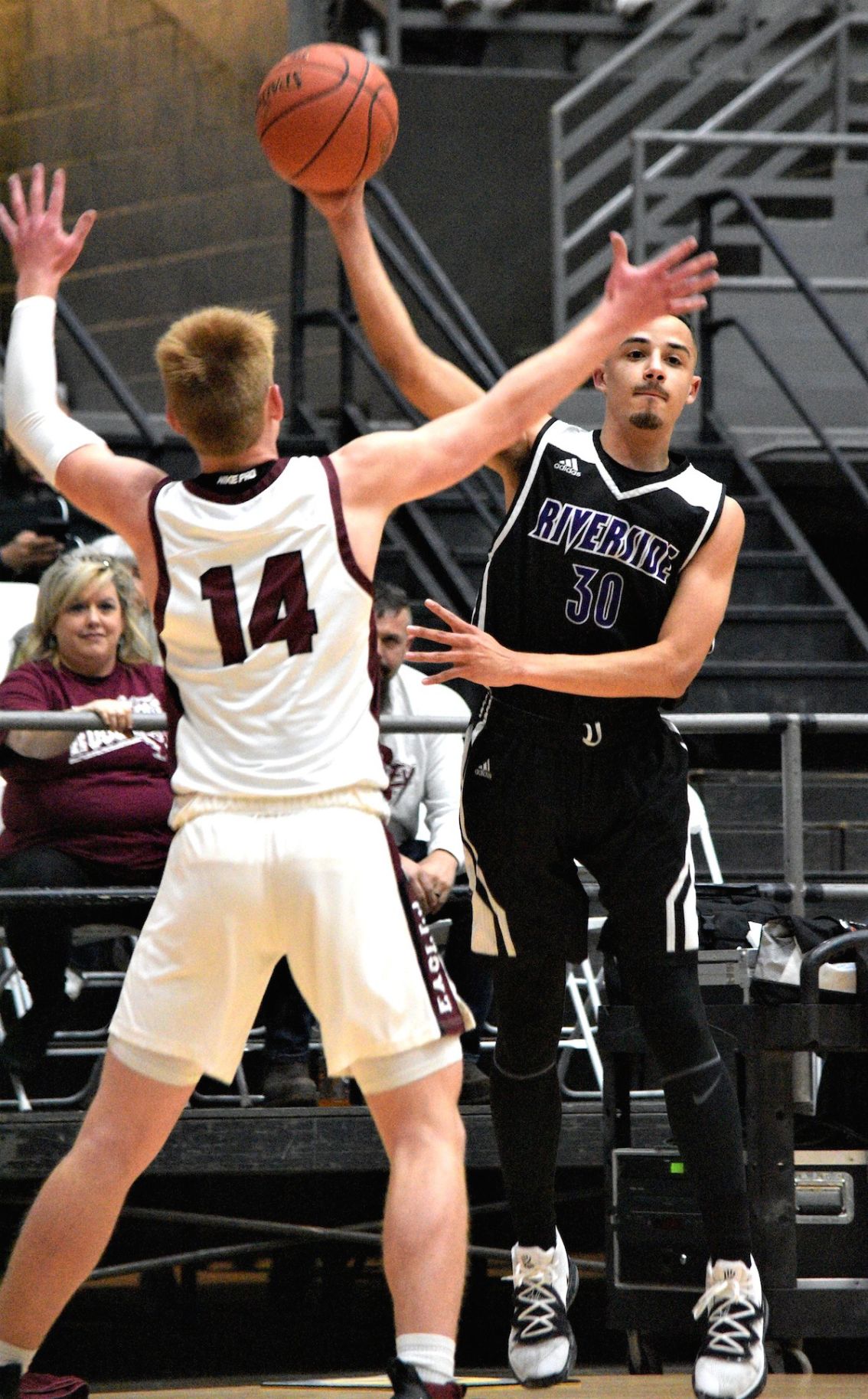 Riverside's Quinten DeMello passes to a teammate over the defense of Woodrow's Maddex McMillen. 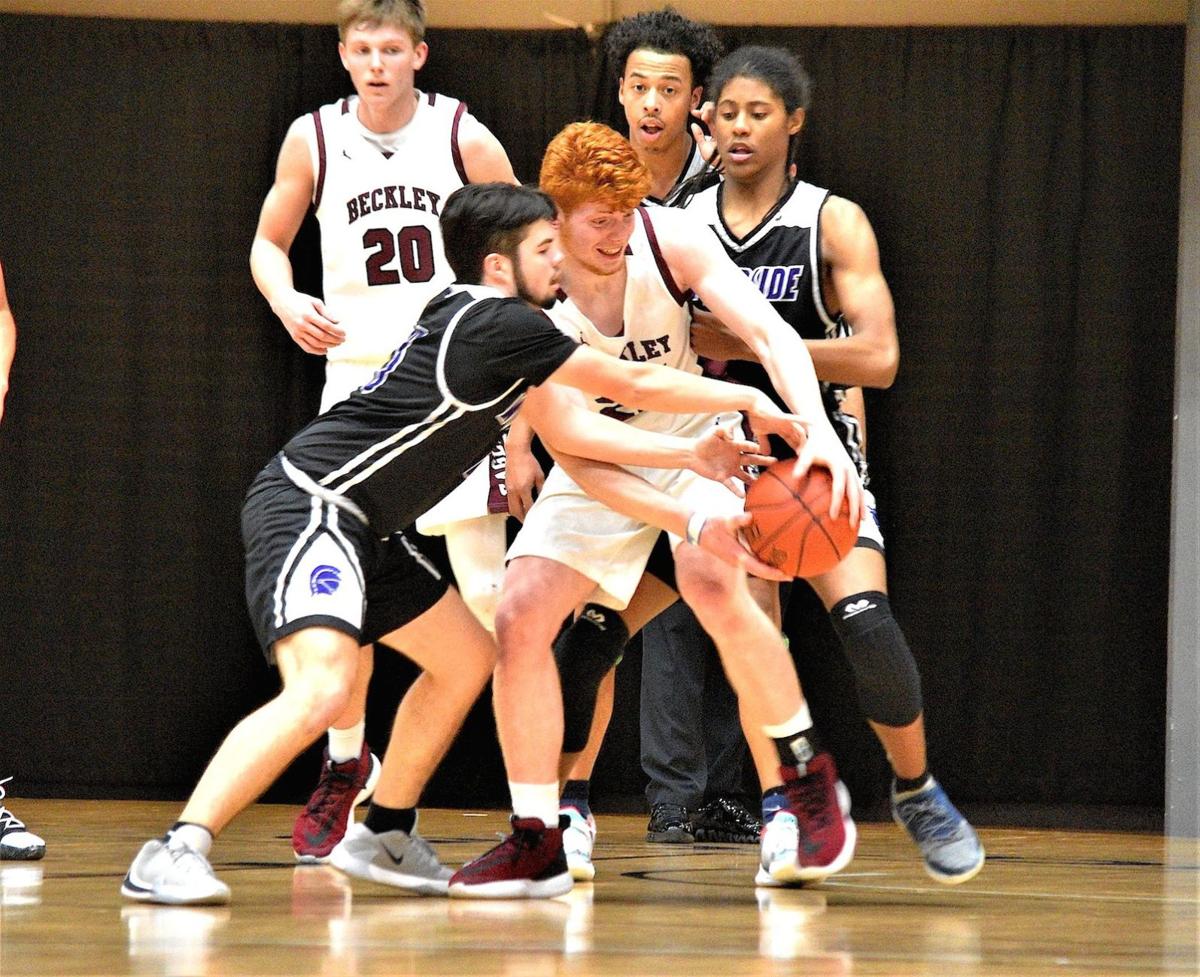 Riverside's Spencer Harvey tries to strip the ball away from Woodrow's Ben Gilliam. Riverside's Brayden Ward and Jeremiah Mason back up the play. 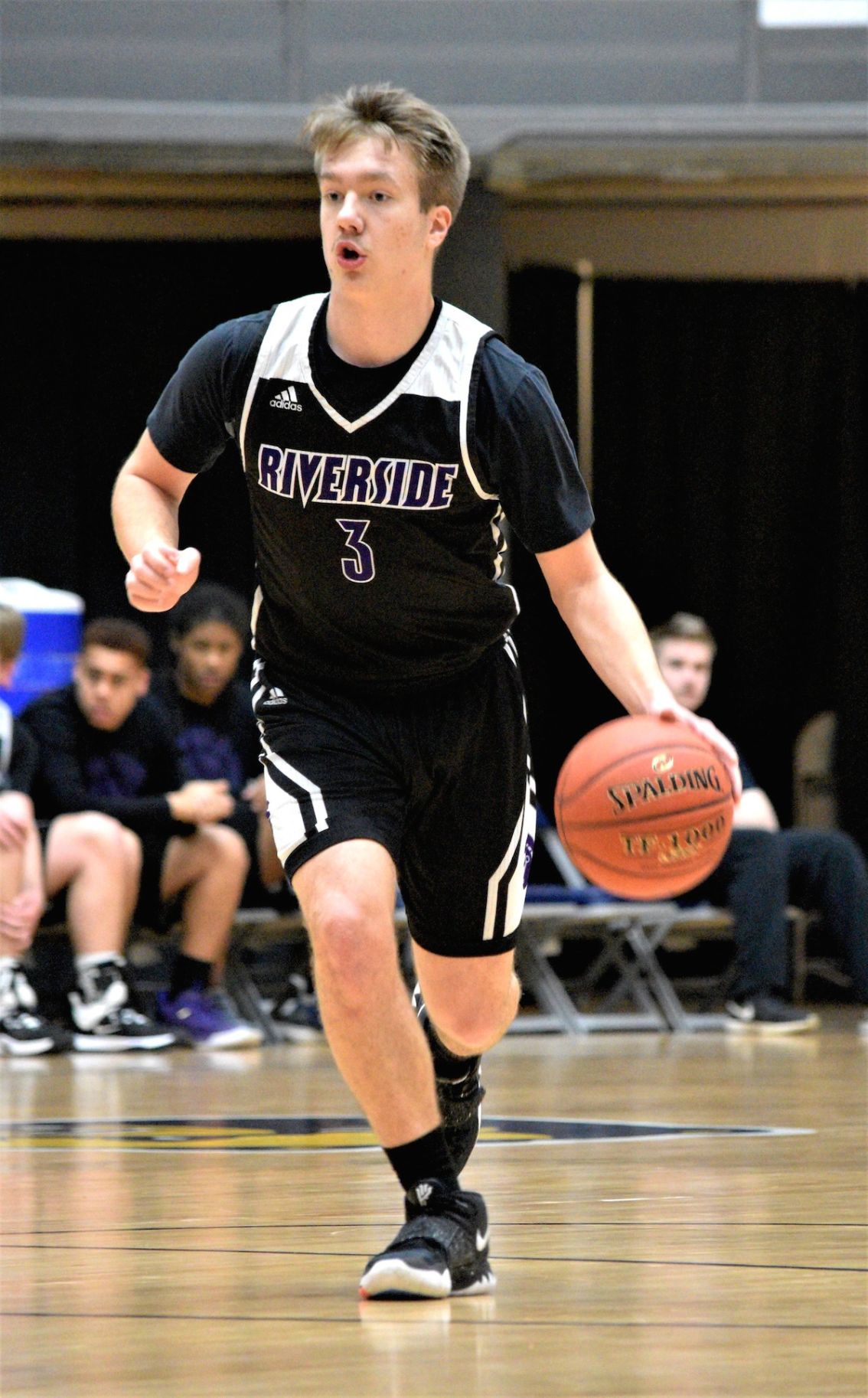 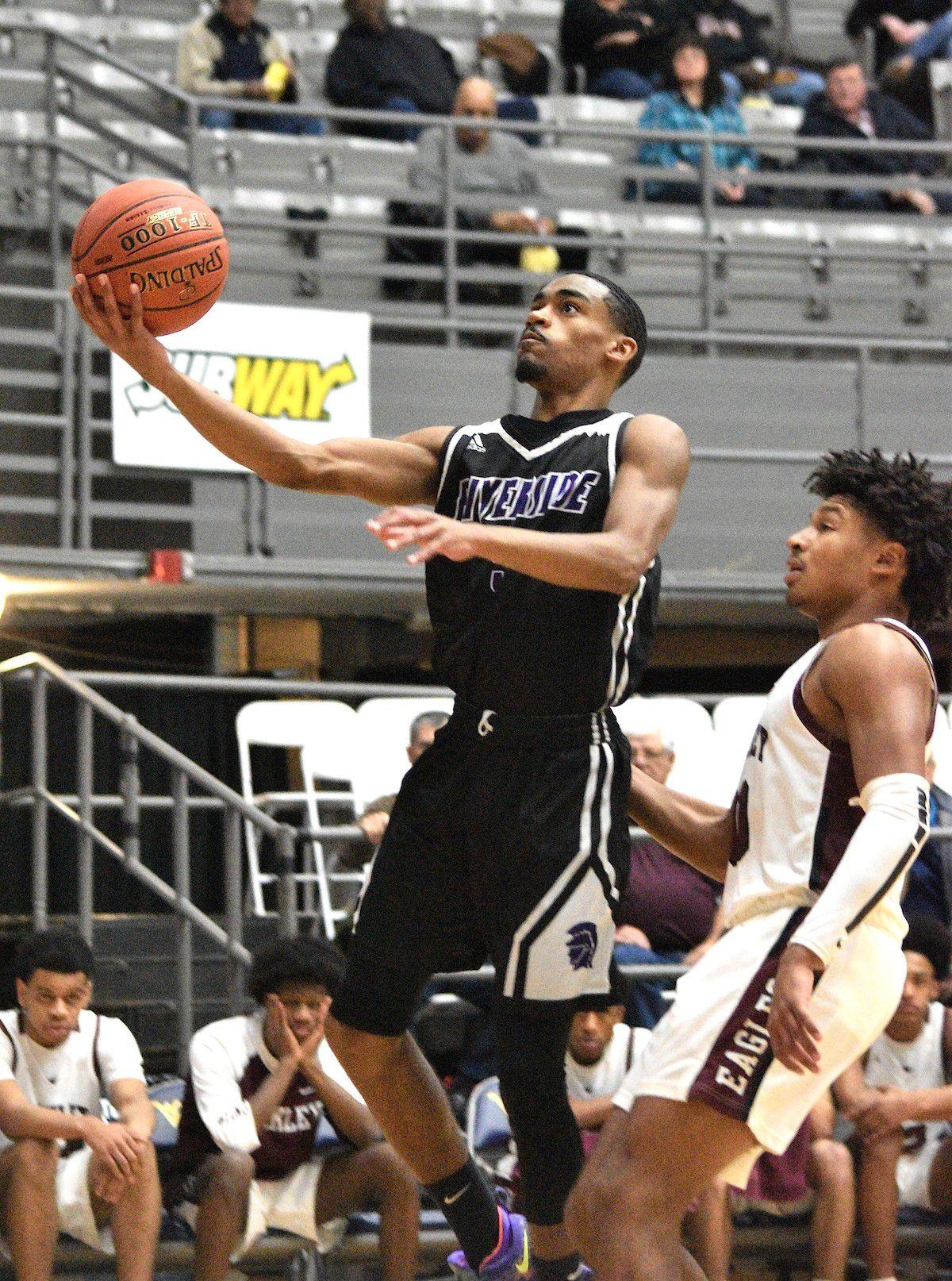 Javante Elzy scores in transition to pull Riverside to within 13-10 at the end of the first quarter. Bryant Jones defends. 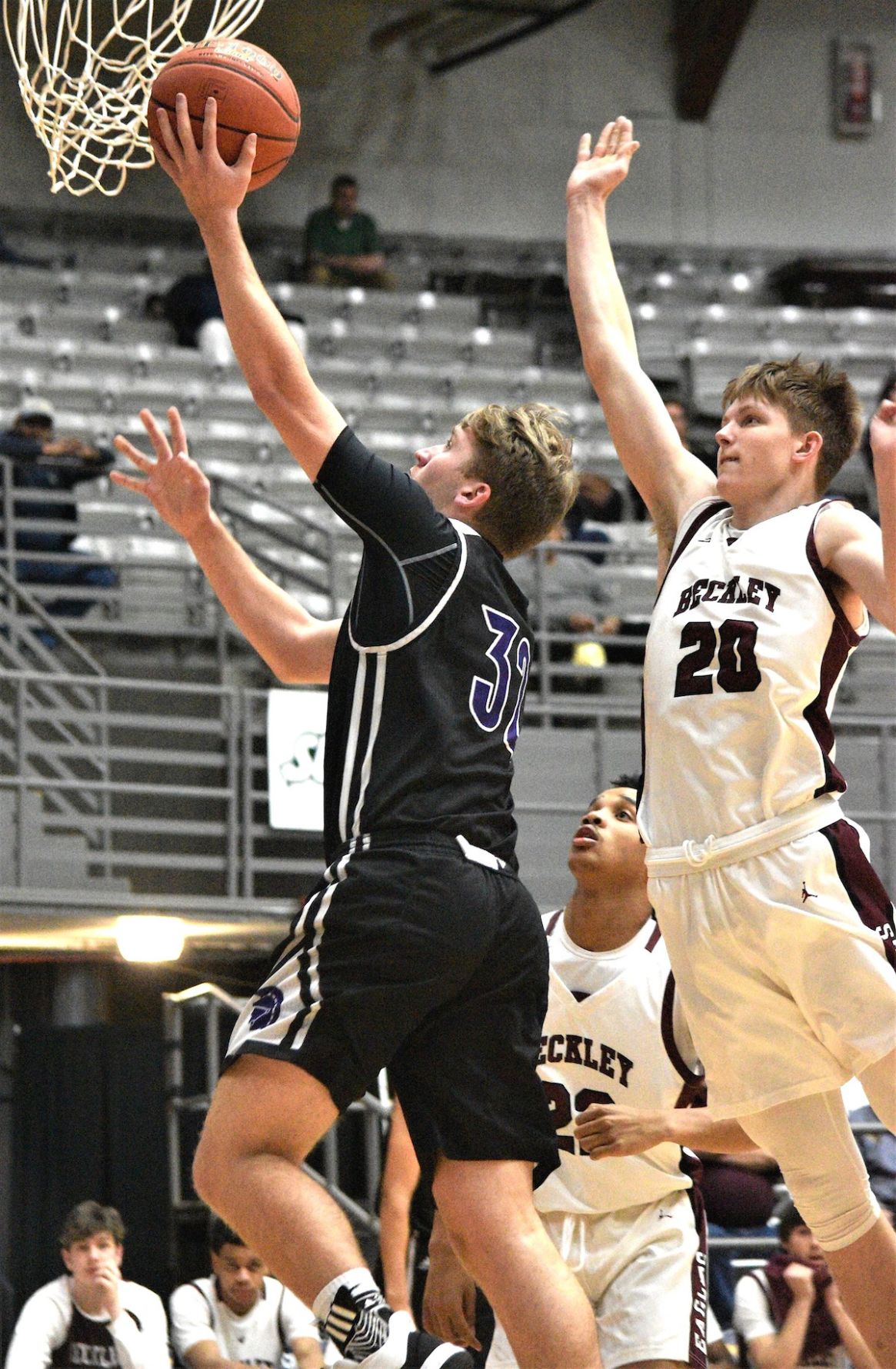 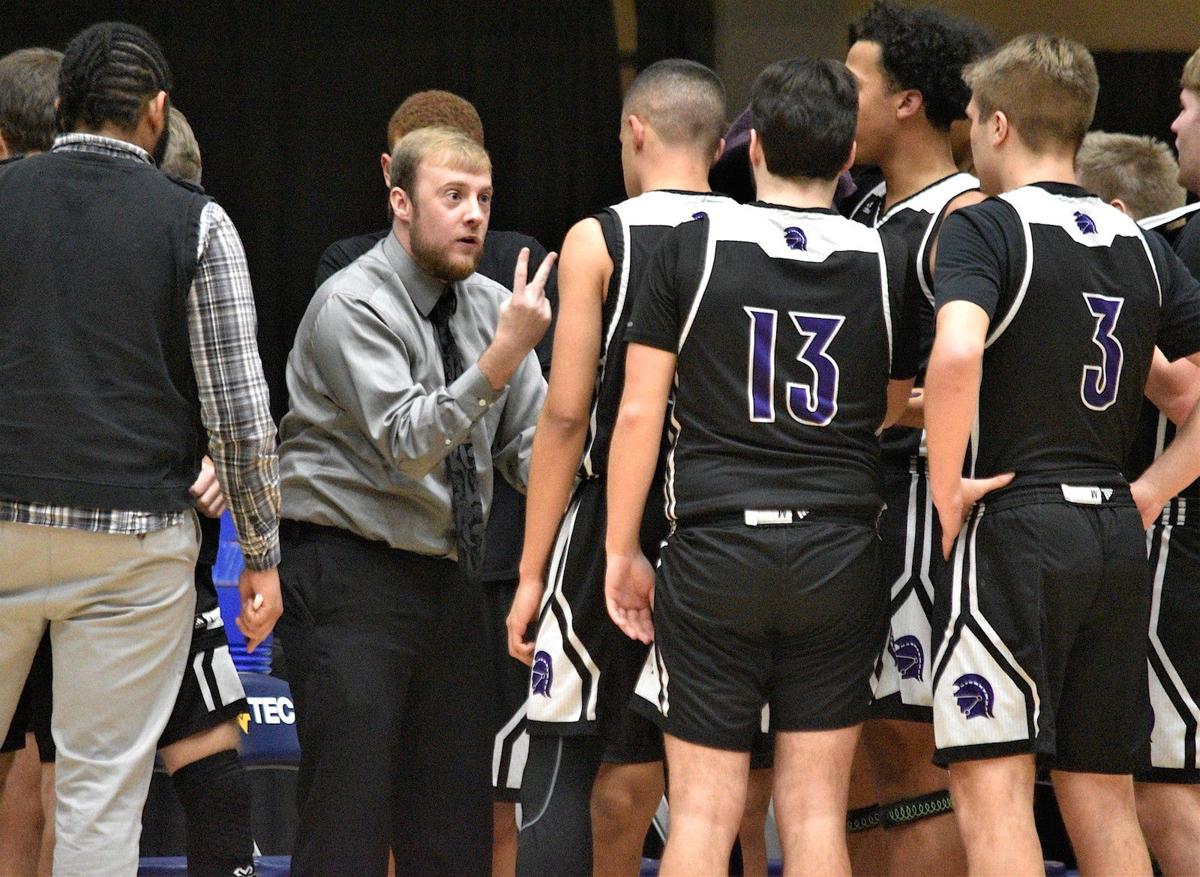 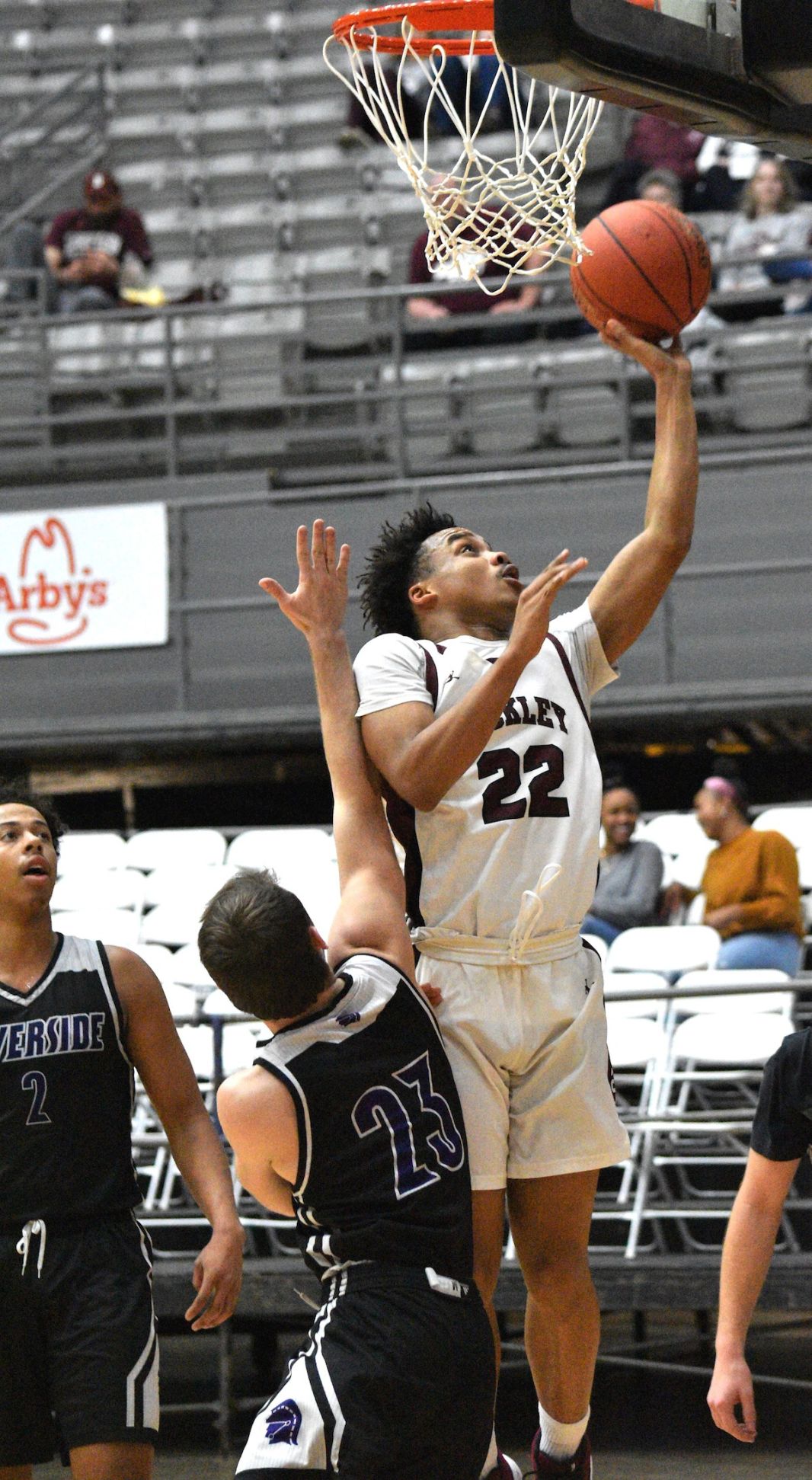 Richard Law scores in the paint for Beckley. Defending is Isaiah Osborne. Looking on is Jeremiah Mason. 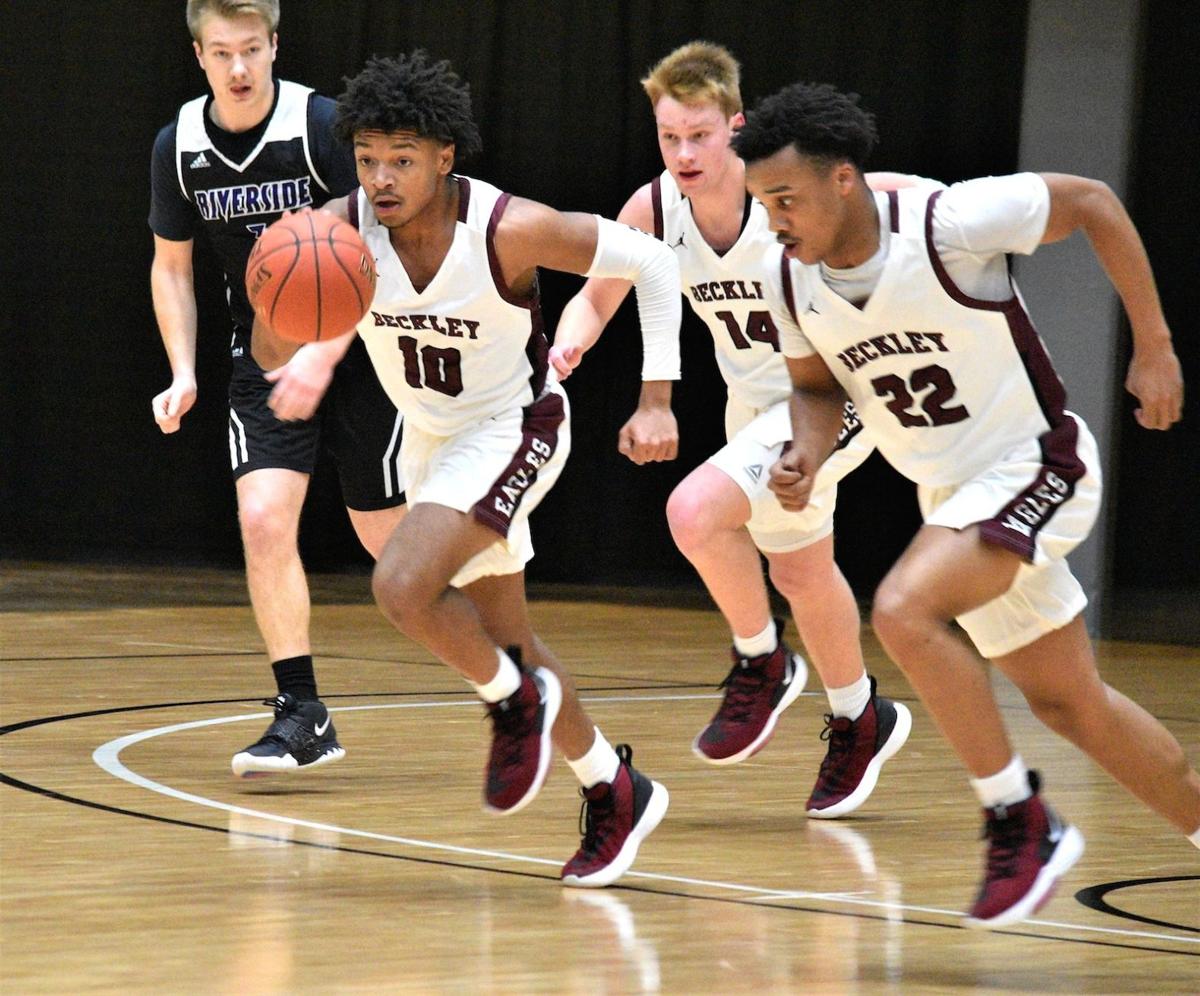 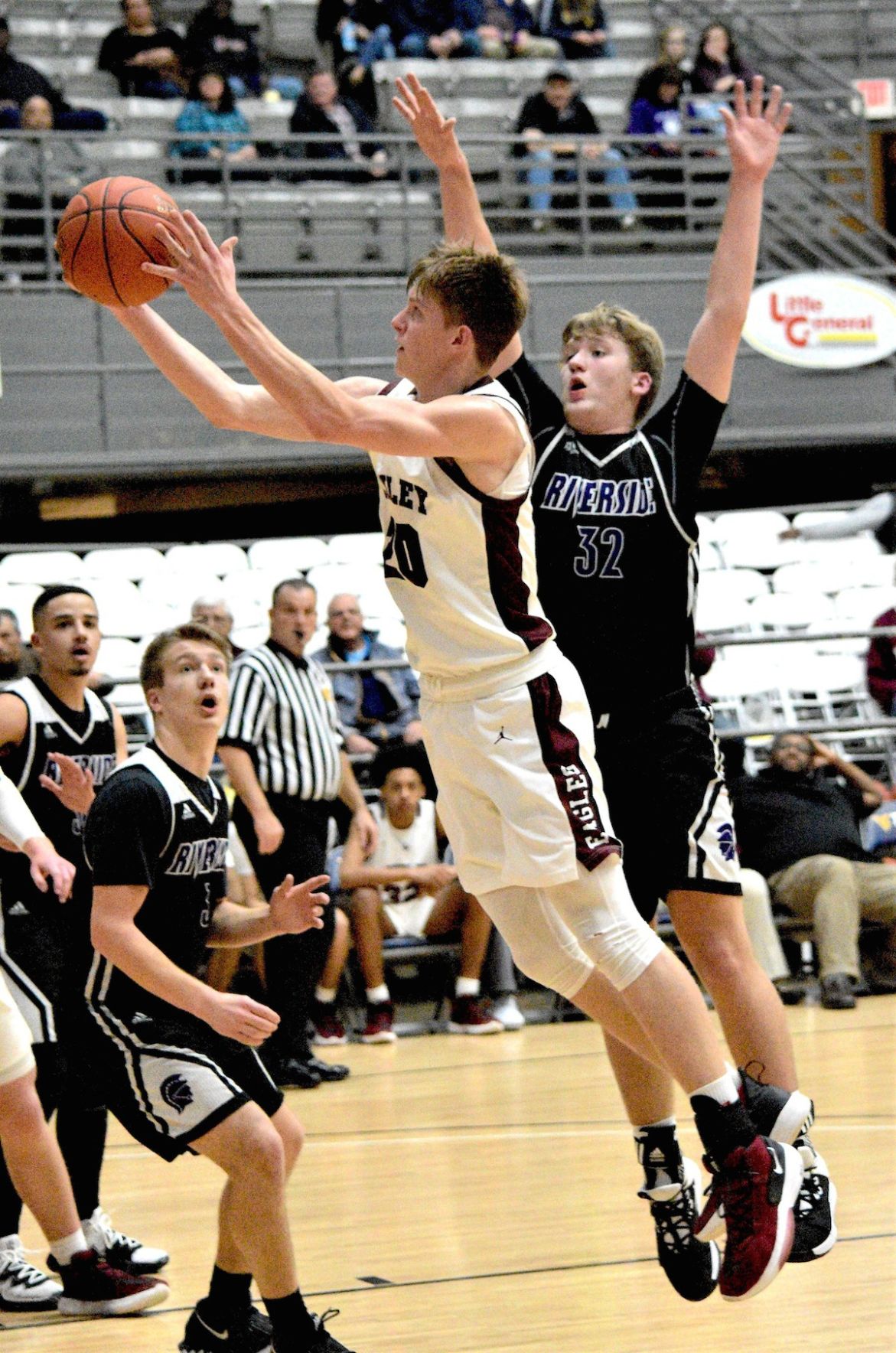 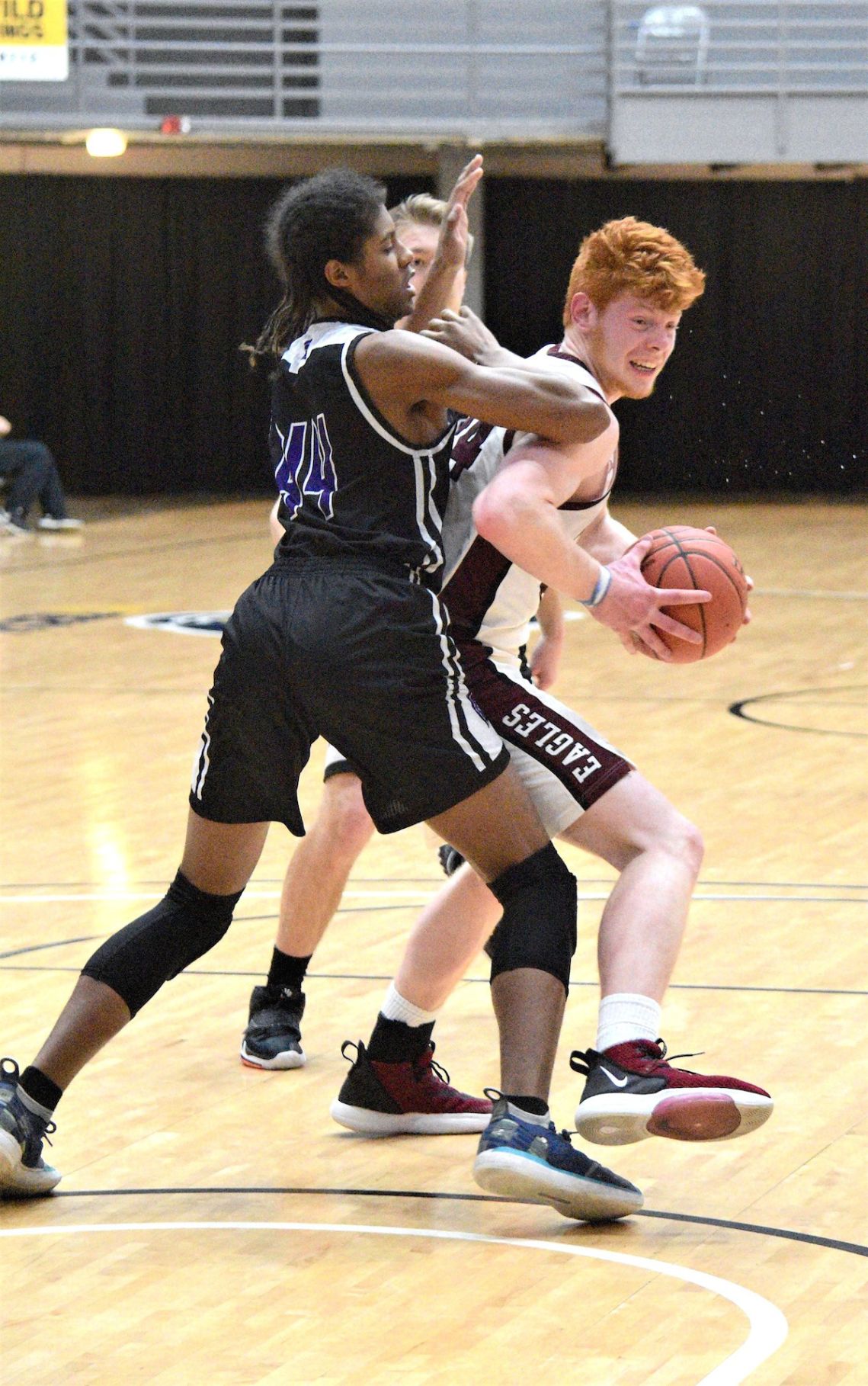 Riverside's Quinten DeMello passes to a teammate over the defense of Woodrow's Maddex McMillen.

Riverside's Spencer Harvey tries to strip the ball away from Woodrow's Ben Gilliam. Riverside's Brayden Ward and Jeremiah Mason back up the play.

Javante Elzy scores in transition to pull Riverside to within 13-10 at the end of the first quarter. Bryant Jones defends.

Richard Law scores in the paint for Beckley. Defending is Isaiah Osborne. Looking on is Jeremiah Mason.

In its Class AAA Region 3, Section 2 semifinal matchup on March 3 against Riverside at the Beckley-Raleigh County Convention Center, the main thing top-seeded Woodrow Wilson had to be concerned with was its own mental makeup.

If Woodrow played like it had during the current six-game winning streak to end the regular season, the Flying Eagles would have no trouble with the visitors from Belle. Get caught looking past the Warriors and Woodrow could get stunned with a major upset.

While Riverside made the game interesting early, in the end, the Flying Eagles had too much firepower and pulled away in the second half for an 84-55 win.

“We always say it is six steps to our ultimate goal of cutting down the nets on championship Saturday,” veteran Woodrow Wilson head coach Ron Kidd said. “The first game is always kind of tough. We started out slow, but then we got better. Give Riverside credit, they came to play tonight.”

Facing an explosive offensive juggernaut, Riverside head coach Taylor Woods felt his team had to slow the game down to have any chance for an upset.

“We really wanted to limit (Woodrow) to the best of our ability,” Woods said. “They have three fantastic scorers on that team. (Ayden) Ince, (Richard) Law and (Ben) Gilliam combine to average 49 points. As a team, we average 51. We knew if we wanted a chance to walk away with this game, we had to slow it down and not let them get their points.

"In the first quarter, I thought we did a god job of that.”

When the first quarter horn sounded, Riverside was right where it wanted to be, trailing by only three points, 13-10.

“(Riverside) did a good job executing and made us really play defense,” Kidd said. “Our kids had to sit down, move their feet and guard people. At times we looked bad and other times we looked good.”

Although the Warriors were making the Flying Eagles work defensively, the visitors had no answers on their side of the floor for Woodrow’s powerful inside game. In the second quarter, Woodrow started to flex its muscle and built a 36-21 advantage at the break.

Ince was the catalyst for the Flying Eagles in the first half scoring 19 of his game-high 26 points.

“(Ayden) was locked in and focused. He really came to play tonight. He understood the moment,” Kidd said. “If you get beat, there is no tomorrow.”

Twice in the third quarter, Woodrow threatened to run away and hide from Riverside, only to see the Warriors fight back. A 6-0 run to end the quarter, capped by a tomahawk dunk from Ince which proved to be the backbreaker.

“We had to change some things up slightly to try and get back in the game. That is not really what we wanted to do,” Woods said. “A couple crucial possessions where we had turnovers and they got easy buckets on the other end hurt us. Ince got the dunk at the end of the quarter and that fired everybody up. Credit to (Woodrow), they have been doing that all season. We had to somehow get them out of their comfort zone, but they hit some big shots.”

“We had some kids that came in there at the end of the third quarter and played some really good defense,” Kidd said. “They put some pressure on (Riverside), made some stuff happen and speeded the game up a little.”

Woodrow Wilson opened the final quarter with an 8-0 run for a 73-34 lead to put the game away.

Woodrow Wilson went on to beat Princeton, 68-64, Friday in the sectional championship game to improve to 17-7.