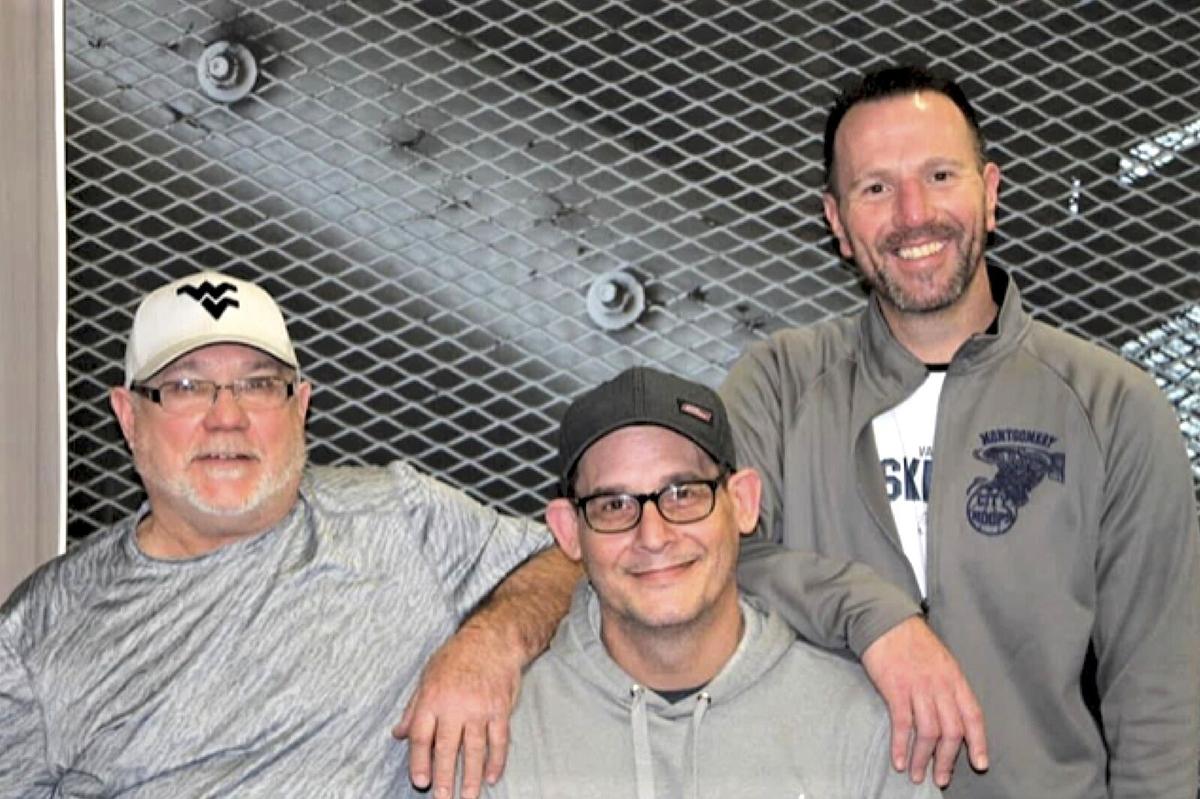 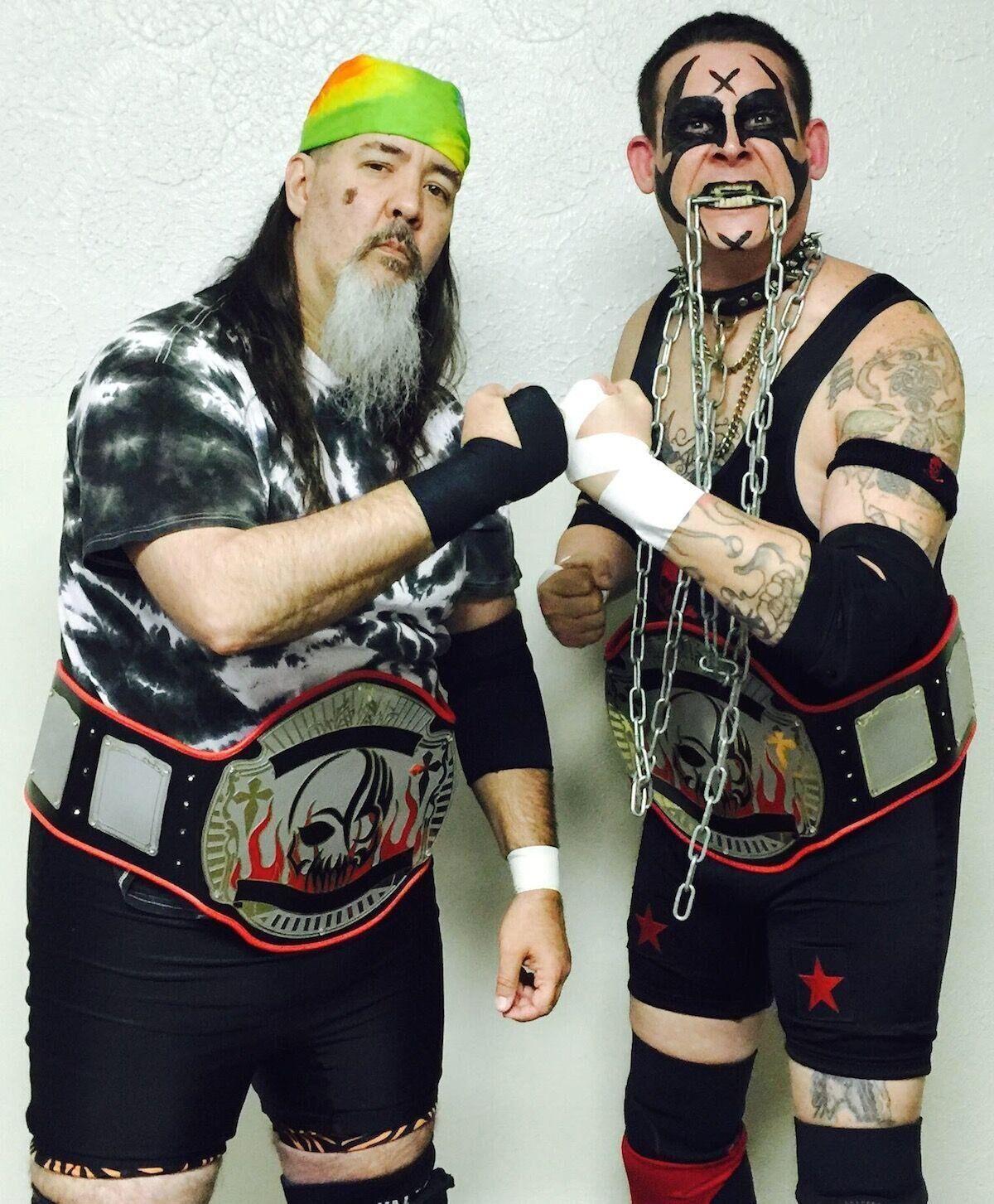 Chuck Nunley (a.k.a. Spyder Crowley), a veteran local wrestler and artist shown at right with his former Urban Death Squad tag team partner Johnny Blast, passed away on Feb. 16. A special night of wrestling action will be held in his honor on March 26 in Gauley Bridge.

Chuck Nunley (a.k.a. Spyder Crowley), a veteran local wrestler and artist shown at right with his former Urban Death Squad tag team partner Johnny Blast, passed away on Feb. 16. A special night of wrestling action will be held in his honor on March 26 in Gauley Bridge.

Chris Hughes and John Frisby were among those who said goodbye to a good friend when Chuck Nunley passed away on Feb. 16 at the age of 52.

Hughes, the owner/promoter of Appalachian Championship Wrestling, is planning A Tribute to "Spyder Crowley" Chuck Nunley, a special night of pro wrestling action this Friday, March 26 at the Ruby Winebrenner Community Center (former Gauley Bridge High School). "It will be a night to celebrate his life," Hughes said.

The ACW New Beginning event in Gauley Bridge will feature the inaugural Spyder Crowley Battle Royal. A meet and greet will be staged at 6:30 p.m., and bell time is 7:30 p.m.

Admission is free, but donations will be encouraged, with the proceeds going to benefit Nunley's family.

Face masks will be required, and those in attendance will be asked to practice CDC social distancing guidelines.

Nunley, wrestling under his professional name of Spyder Crowley, performed with ACW and other local wrestling organizations for about two decades, Hughes said. Among his achievements was capturing tag team titles with partner Johnny Blast as members of the Urban Death Squad.

"I met Chuck when I was 25 when he first started wrestling," Hughes said of Nunley, who was also known for his artistic talents. "When I started my company, he was one of the first people I contacted.

"That's how important he was to me as a friend."

Hughes remained in contact with Nunley even after he discontinued his career in the ring a couple years back.

"I never lost touch with him even after he stopped wrestling," Hughes said. "He was my friend all the way to the end.

"I truly felt I lost one of my best friends."

Active in the community along many fronts, Nunley was long associated with the City Hoops organization in the Montgomery and Smithers area. Frisby, a longtime Nunley friend since they were in school together at Valley Elementary School, posted on the City Hoops Facebook page following Nunley's passing last month.

"As some of you may or may not know we lost Chuck Nunley on Tuesday, February 16," Frisby's comments read in part. "Chuck has literally been the face of the City Hoops league for some years now. It's taken me a few days to be able to write this but Terry (Abbott) and I felt that we needed to say something on here to honor him and what he meant to City Hoops and to all of you.

"Chuck's face and voice were the first and last thing everyone would see and hear as they arrived and left for the day. ... Everyone loved how he greeted them, announced their arrival or otherwise just gave them some Chuck."

"Chuck was much more than the guy that just sat at the door and took your money; he would help do anything to keep the league going and make sure the kids had a great time, even if that was just for a few minutes interacting with him," Frisby continued. "I am still amazed that I convinced him to play in the coaches game as Spyder a few years back, but that was Chuck just coming through for his friend.

"It's safe to say that City Hoops will never be the same without Chuck sitting at the door and for me especially it's gonna be hard not having him there, but I know how much he loved the league, the kids, the parents and all the supporters that would come through the doors each weekend. We all have so many great memories of Chuck Nunley, and that's how we will carry on without him leaning on those to make us smile and give us strength."