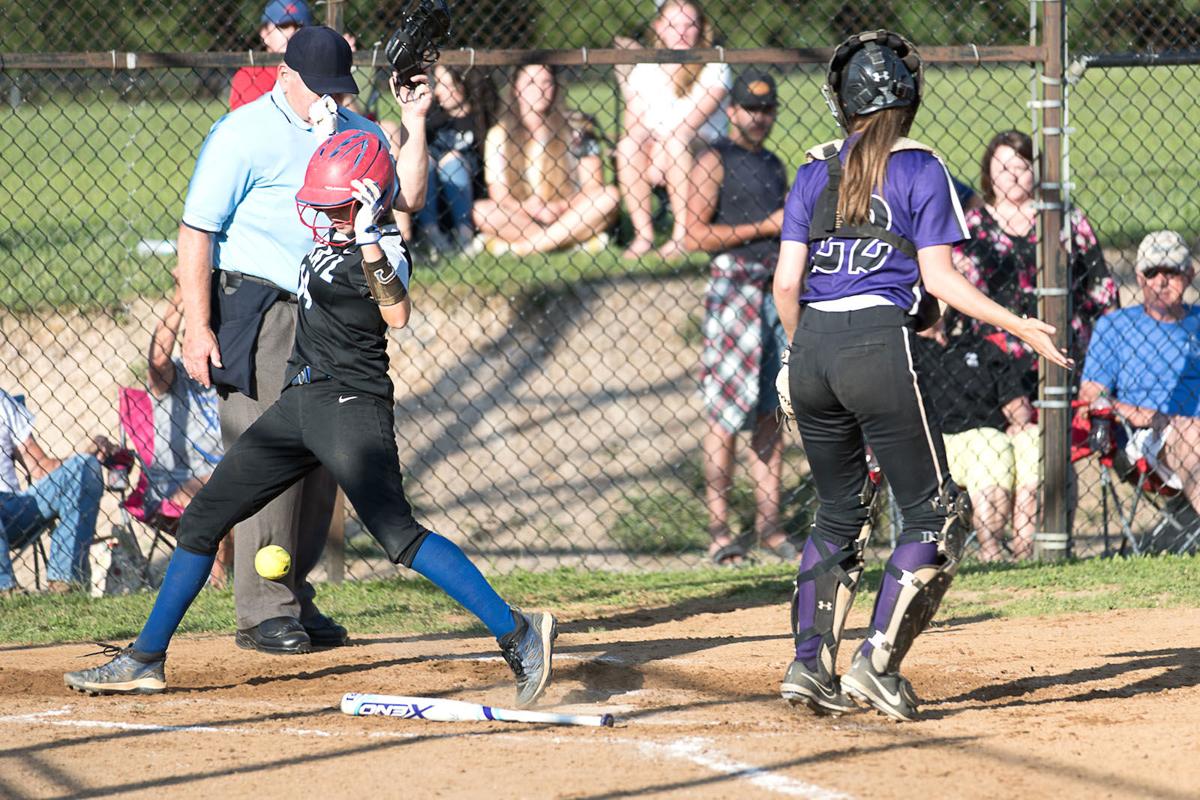 Sydney Sheets scores another point for Midland Trail in Game 1 against James Monroe. 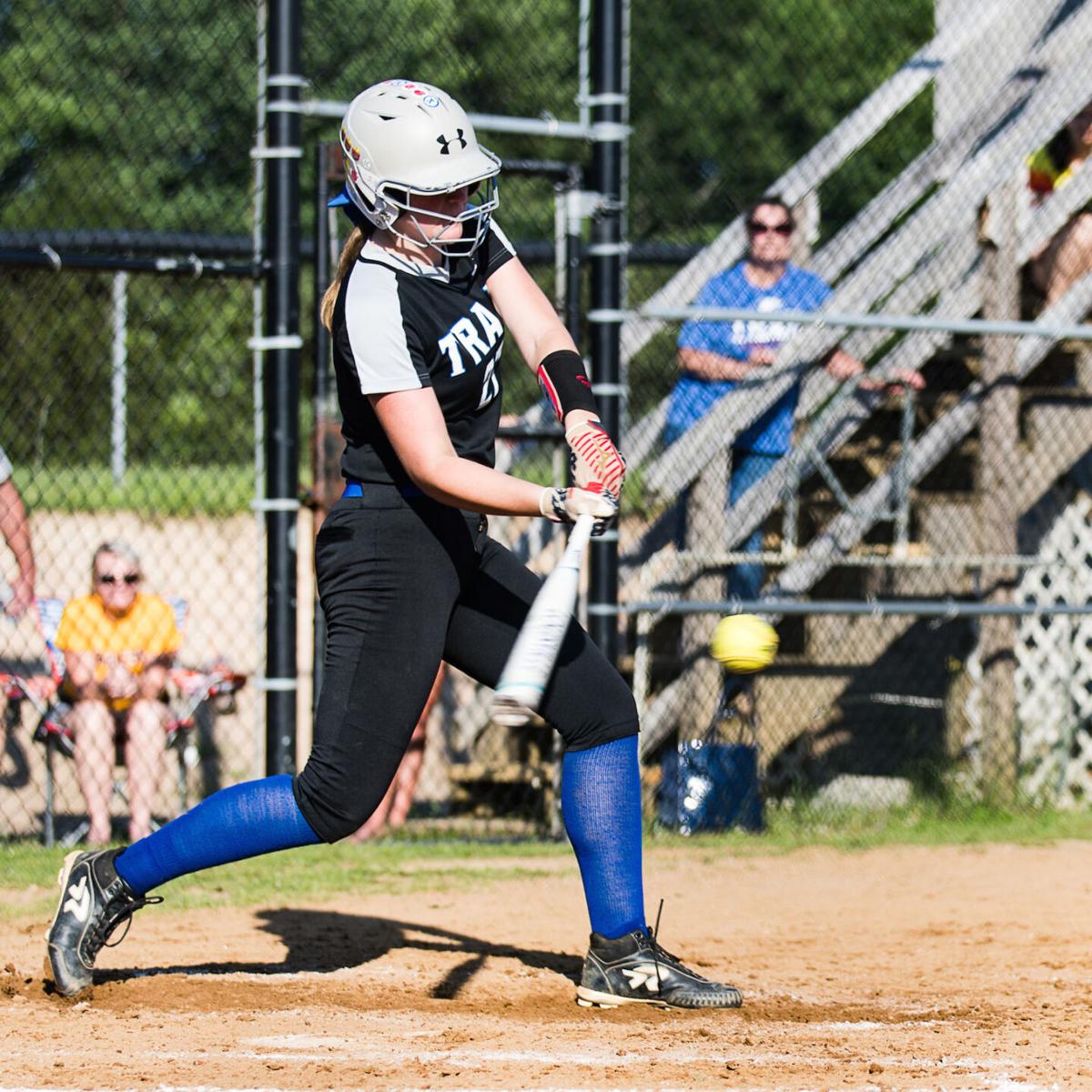 Meghan Gill of Midland Trail gets a hit against James Monroe. 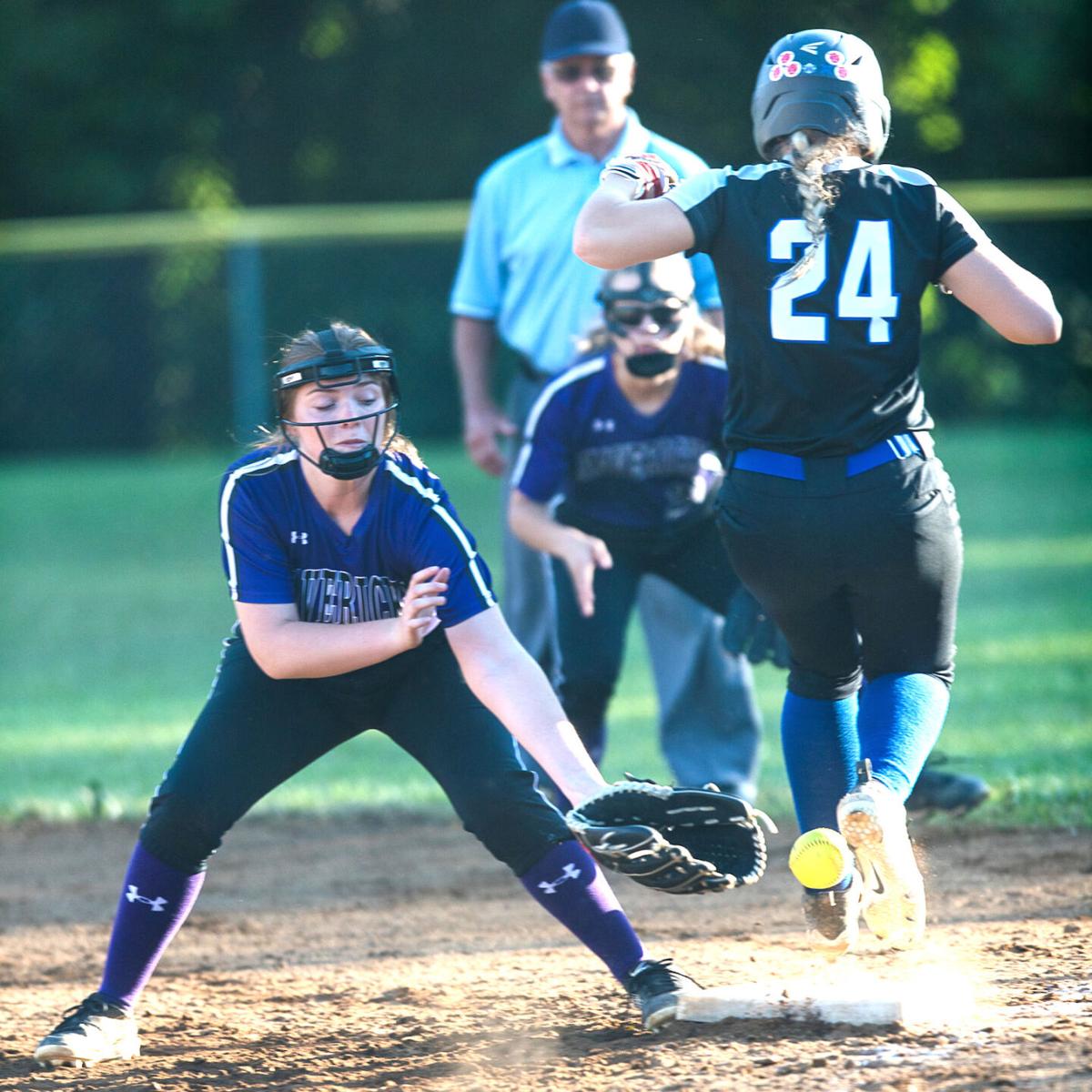 Malayla Tompkins of Midland Trail is safe at first base in opening game of the regional contest against James Monroe. Trail swept the Mavericks in two to advance to next week's state tournament.

Sydney Sheets scores another point for Midland Trail in Game 1 against James Monroe.

Meghan Gill of Midland Trail gets a hit against James Monroe.

Malayla Tompkins of Midland Trail is safe at first base in opening game of the regional contest against James Monroe. Trail swept the Mavericks in two to advance to next week's state tournament.

The Midland Trail Patriots closed out their Region 3 softball championship Tuesday with an 11-4 road victory over the James Monroe Mavericks.

With the victory, the Patriots earn their first state tourney berth since 2004.

Midland Trail clung to a 4-3 lead through the first three innings in Lindside Tuesday before taking control down the stretch, plating seven runs over the course of the final four innings.

For Midland Trail, Sydney Sheets led the way by going 3-for-5 with a home run, a double and a pair of RBIs. Emily Dickerson was 2-for-5 with two doubles and two RBIs, Emmie Lopetrone was 2-for-5 with a double, Meghan Gill was 2-for-4 and drove in a run, Faith Bailes was 2-for-3 with a two-base hit and one RBI, Madison Campbell knocked in a pair of runs, and Chezney Skaggs and Jordian Stonestreet supplied one RBI each.

The state tournament will begin Tuesday in South Charleston.

Midland Trail endured a rocky first inning but saw smooth sailing the rest of the way in defeating James Monroe 9-2 on the opening night of the Class A Region 3 softball championship series.

Spurred by RBIs from Emille Canterbury and Adyson Hines, the visiting Mavericks logged three hits and pushed across two runs in the top half of the first inning to grab a quick 2-0 advantage over the Patriots.

Midland Trail got a run across in the bottom half of the first when Emily Dickerson reached on a double and later scored after eluding a run-down between third and home.

The Patriots settled down after its sluggish start, pushing across three more runs — all with two outs — in the second frame to assume control and eventually take charge in the best-of-three series. "Over the course of the year, we've been a two-out rally team at times," said Midland Trail head coach Candace Young.

A four-run uprising in the fourth frame then boosted the Patriots' advantage to 8-2.

"Coming in to warmups, I could see some deadness to us, maybe some underestimation," Young admitted. "We were definitely not as intense as we needed to be from the get-go."

After James Monroe put the hosts in the early hole, the Patriots made some adjustments which proved to be just what the doctor ordered.

"I don't call pitches," Young said. "(Pitchers Emmie Lopetrone and Meghan Gill and catcher Sydney Sheets) have better vantage points. They saw what they were swinging at in that first inning and what they were able to make contact with, and they adjusted on the mound.

"And, I think it gave our girls (the notion), 'We should probably wake up and play a little tougher.' "

Including the first inning, Lopetrone, the starter, wound up yielding just four hits and two earned runs while striking out seven and walking none in a five-inning stint. Gill pitched two hitless, scoreless innings with two strikeouts in relief.

James Monroe head coach Greg Wickline called Trail's second inning "a big turning point in the game. It was 2-1 and it ended up being 4-2."

"You can't ask for any better, two outs and nobody on," he said. "You gotta make that next play. You can't walk anybody. We fell behind on some hitters.

"They hit what they wanted to hit, not what we wanted them to hit."

"We've got to make those routine plays," he added.

The Patriots, winners of 16 straight, produced 10 hits on the evening, with only one player — center fielder Madison Campbell — having a multi-hit game. Young was glad to see such balanced production from her charges.

"You never know in our lineup which girl is going to step up," she said. "I give out stickers for hits and everything. I think today was the very first game I gave out a sticker to every girl. Every girl played a part in that one and had at least one hit during the game."

"We didn't get some bunts laid down, that was a big deal," said Wickline. "We did some uncharacteristic things that we typically don't do, maybe just due to nerves or whatever. I don't know."