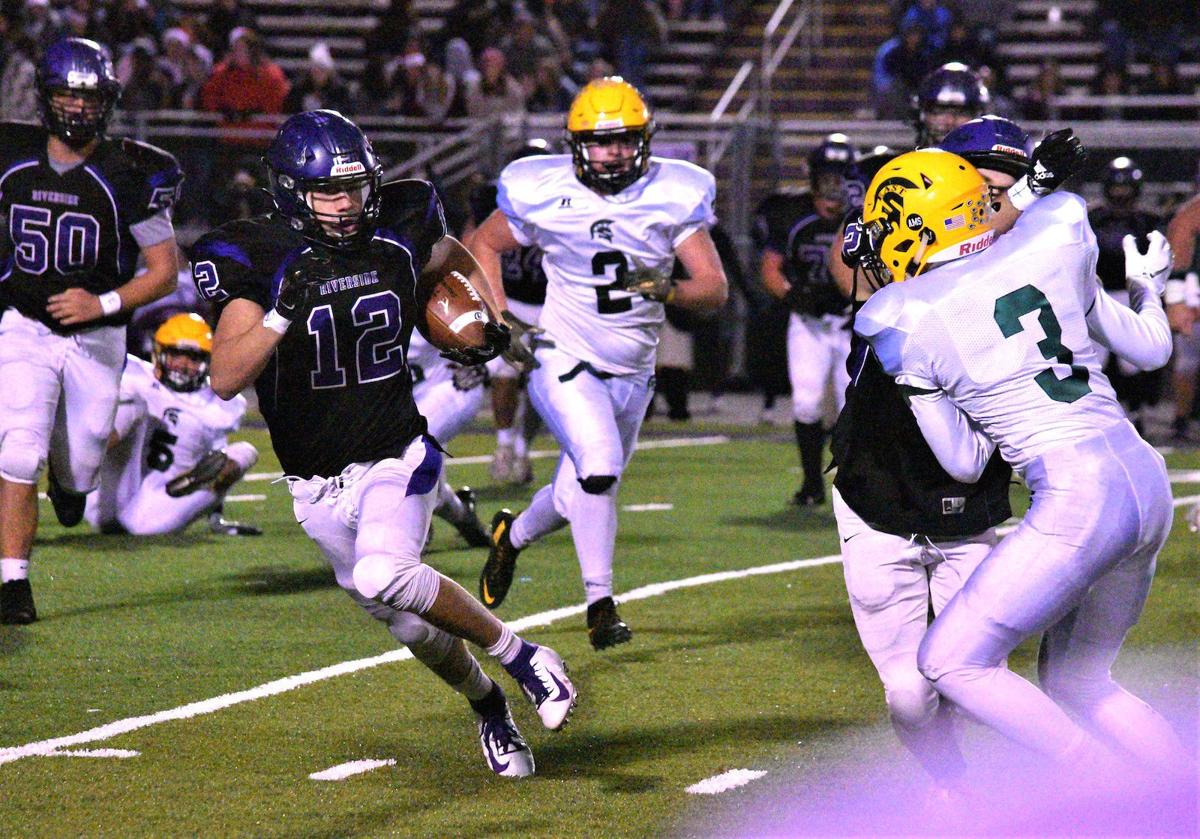 Riverside back Caden Easterling maneuvers for yardage during the Warriors' 25-6 loss to Greenbrier East Friday. Trying to shed a block and make the tackle is East's Bryson Ormsbee. Trailing the play for Riverside is lineman John Taylor. 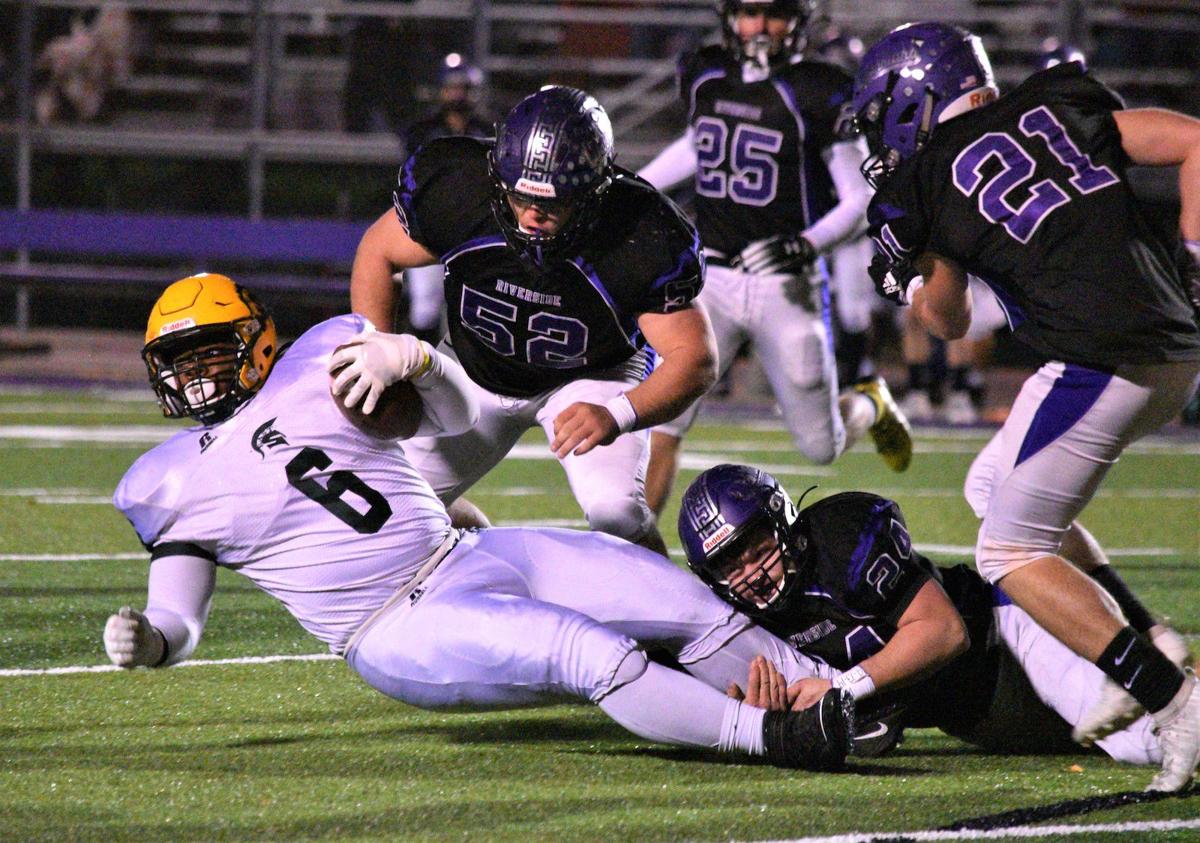 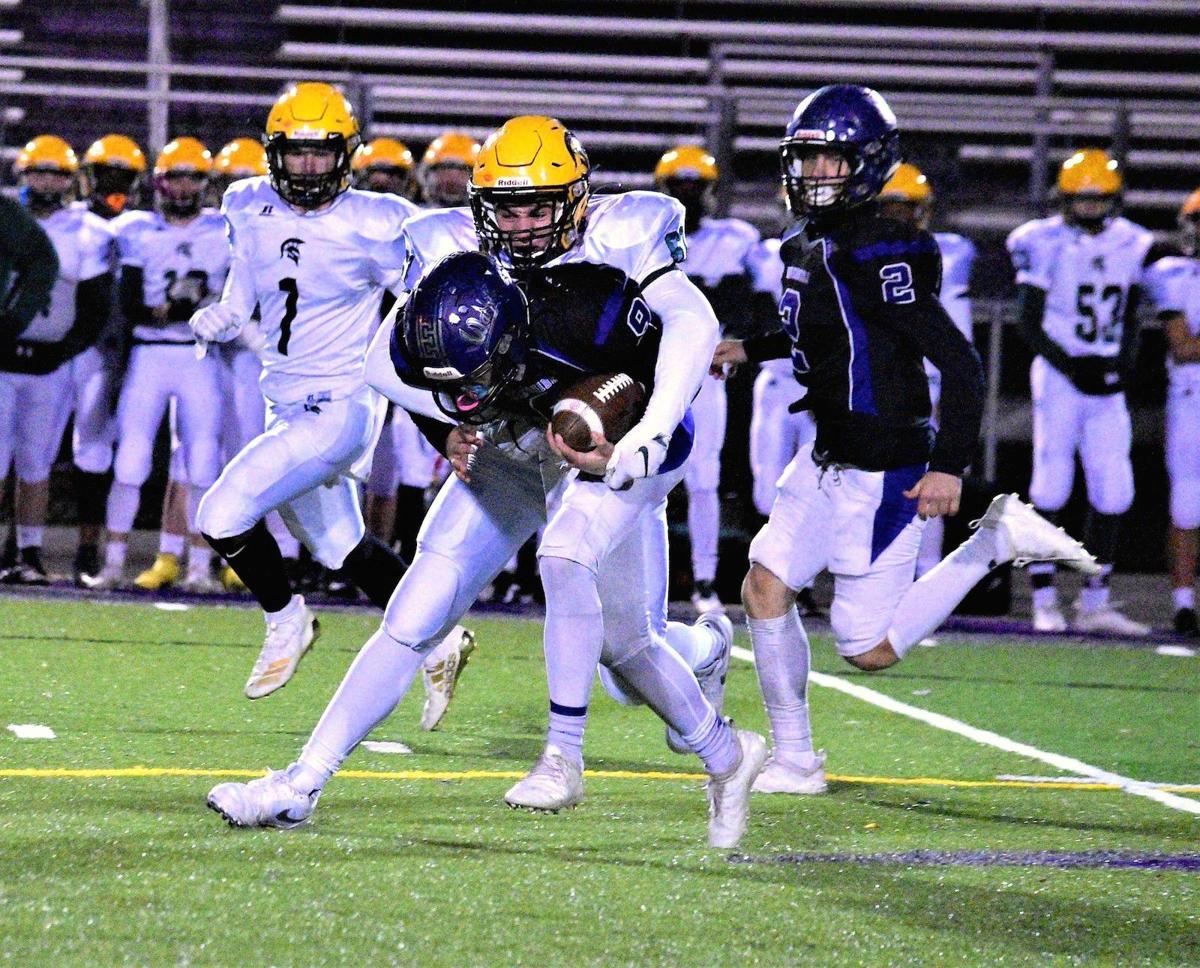 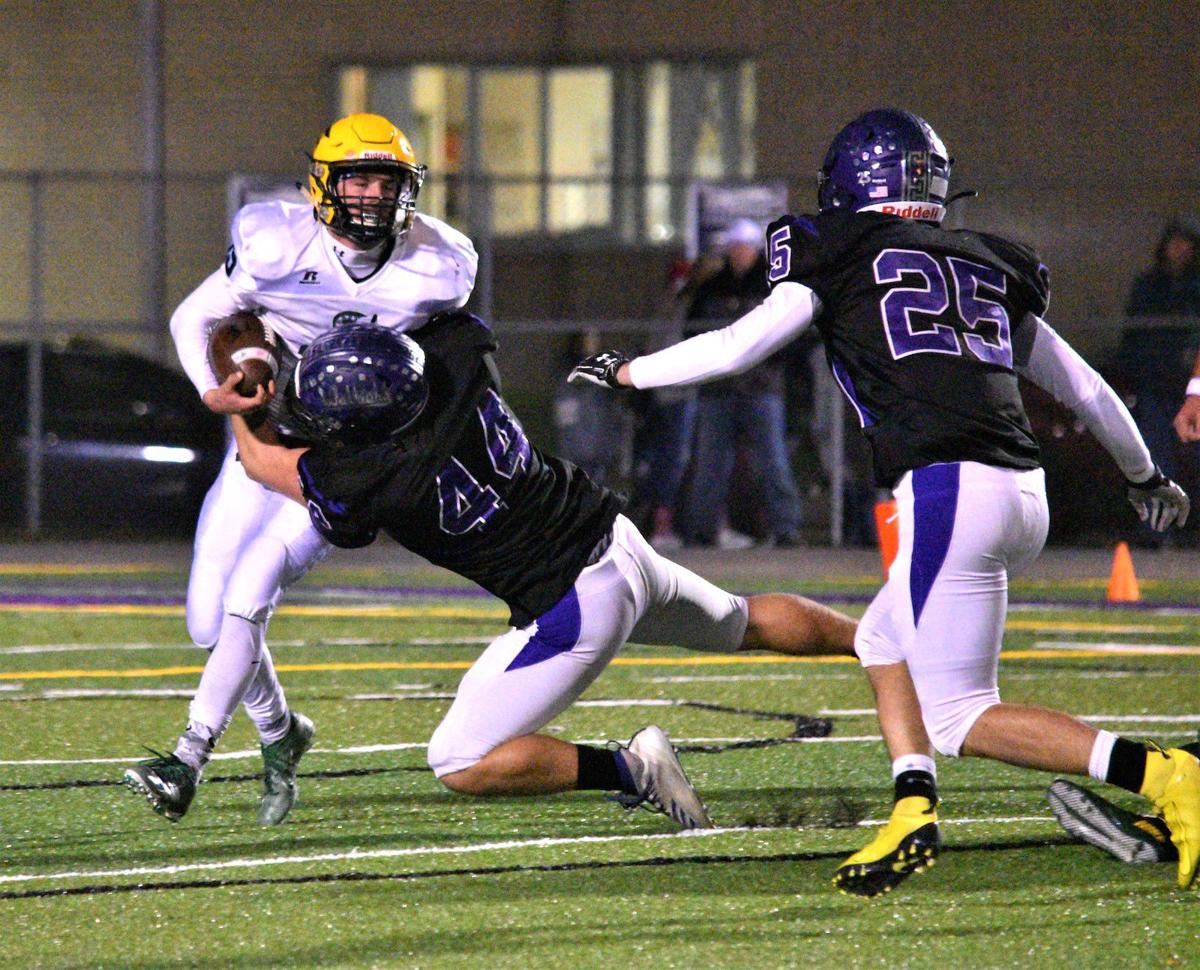 Spartan quarterback Kyle King has his progress halted by the Warriors' Austin Stephenson. 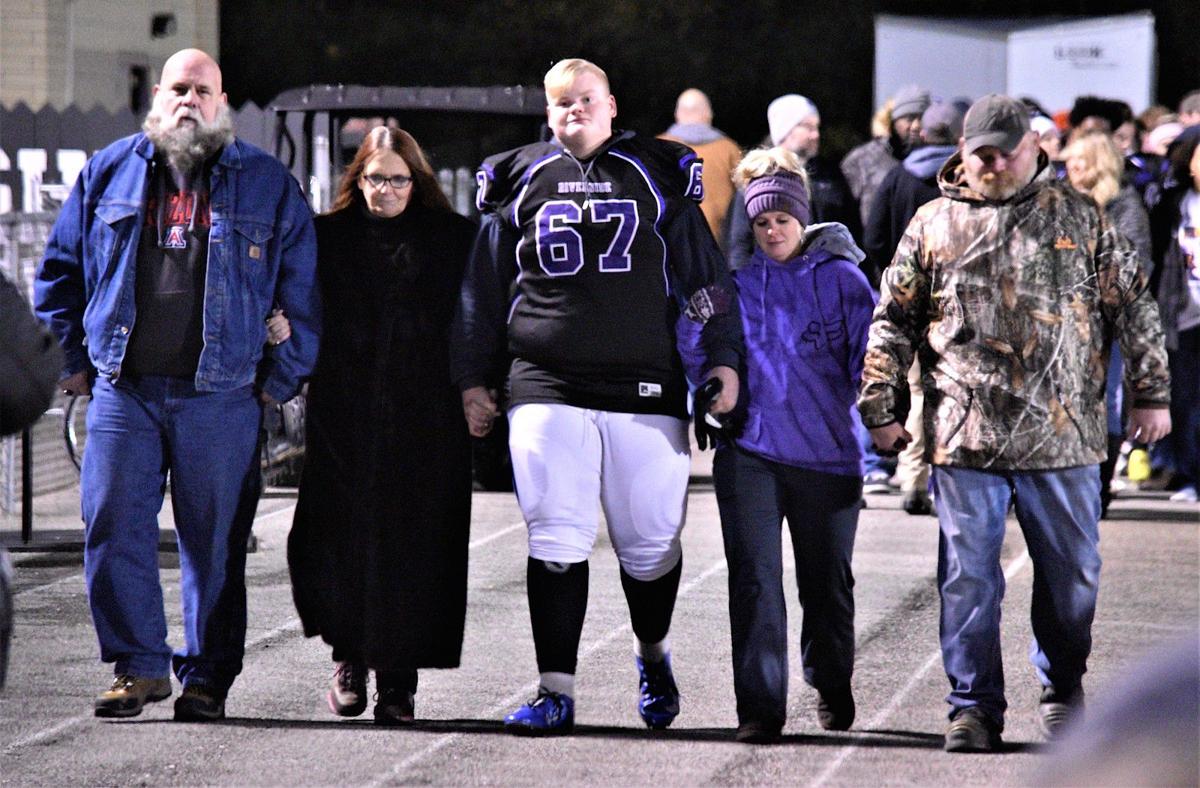 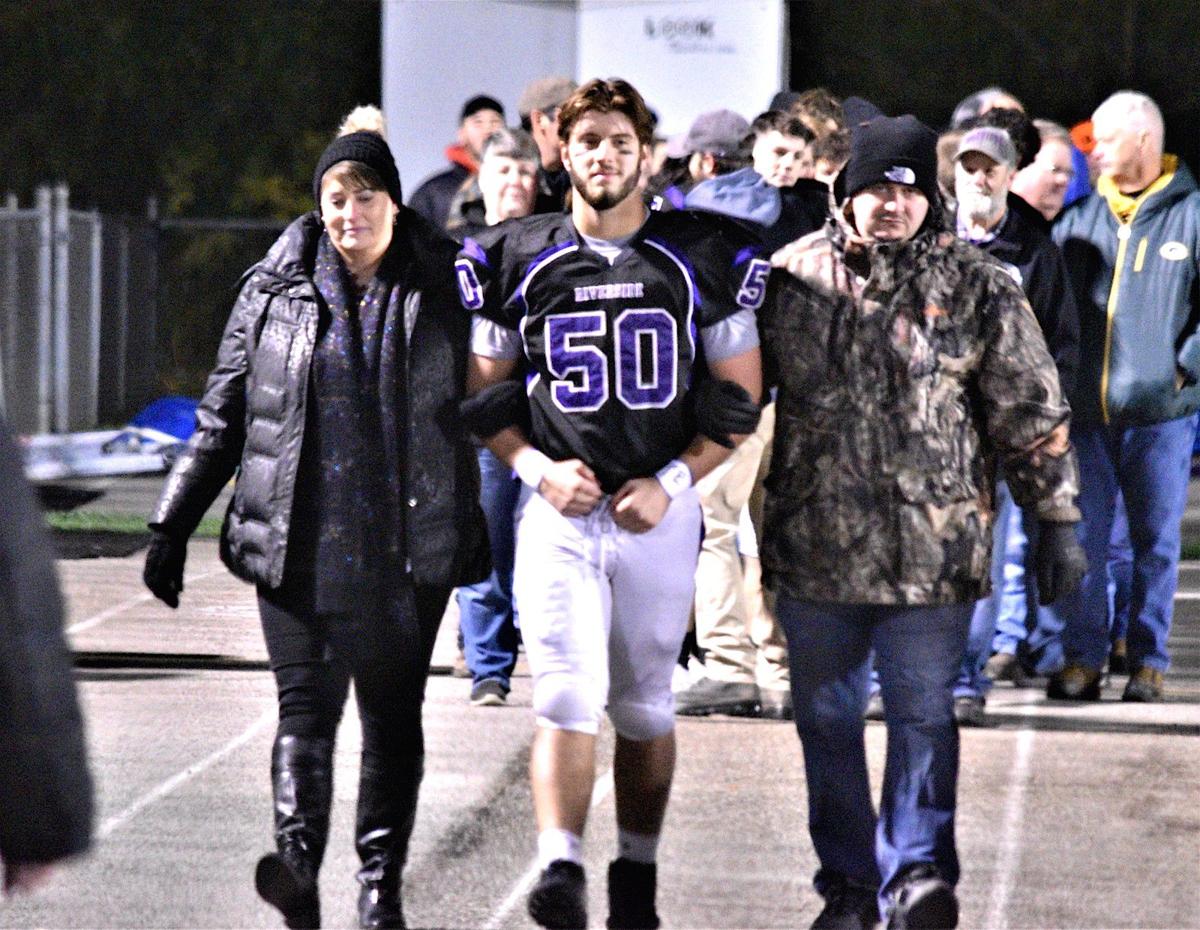 Gridder John Taylor was also among those recognized.

Riverside back Caden Easterling maneuvers for yardage during the Warriors' 25-6 loss to Greenbrier East Friday. Trying to shed a block and make the tackle is East's Bryson Ormsbee. Trailing the play for Riverside is lineman John Taylor.

Spartan quarterback Kyle King has his progress halted by the Warriors' Austin Stephenson.

Gridder John Taylor was also among those recognized.

QUINCY — It took a little while, but a late season Spartan surge continued Friday night.

After a scoreless first half with Class AAA No. 14 Riverside, Class AAA No. 9 Greenbrier East (7-3) utilized a potent running attack to dominate play in the second half en route to a 25-6 victory over the Warriors. The win allowed the Spartans to finish No. 8 and secure home field advantage for this week's playoff opening-round game against No. 9 Spring Mills. It will mark Greenbrier East's second straight playoff appearance.

Marion Lawson carried 27 times for 175 yards and notched three second-half touchdowns, and teammate Kyle King accumulated 141 yards and a touchdown on 18 carries to lift the Spartans to their fifth victory in the last six games after a 2-2 start to the season.

"We just went in and made a few adjustments across the offensive line to make sure we had our blocking schemes down pat," said Greenbrier East head coach Ray Lee. "We came back out in the second half and we just executed."

King provided Greenbrier East's first score on a 6-yard run midway through the third quarter, a tally which capped a drive that featured 32 rushing yards from Lawson and a key pass interference penalty on the Warriors. Lawson then scored the Spartans' next two 6-pointers. The first occurred on a 9-yard run which put the finishing touches on an 11-play, 85-yard march after the Spartans had taken over on downs deep in their own territory. Lawson and King provided the bulk of the carries during that possession.

Lawson then reached the end zone on a 9-yard run and Owen Voglesong's PAT kick staked the visitors to a 19-0 margin with 3:20 to play, giving the Warriors too much of a hole from which to escape.

"The big back, Lawson, was able to go right at us," said Riverside head coach Alex Daugherty. "We just couldn't stop the iso.

"They just went right at us, and we didn't make enough plays."

Lee said the Spartans have remained close this year and turned in a total team effort to post the 7-3 regular season finish.

"We're proud of them," he said. "We just set high expectations for them, and they fought all year long."

"We don't have an overabundance of players who come out," Lee continued. "But these guys have stuck with it."

Of the 49 players in fall camp, 48 remained on the roster as of this week.

The Spartans had a prime scoring opportunity as the first half wound down. After recovering a Warrior fumble, the subsequent Greenbrier East drive included Lawson ripping off an 18-yarder followed by a King 24-yarder to get East inside the Riverside 10. The drive, however, ended when King was stuffed at the 1-yard line on fourth-and-1. Riverside ran one play and the first half ended in a 0-0 deadlock.

Caden Easterling carried 16 times for 86 yards for the Warriors.