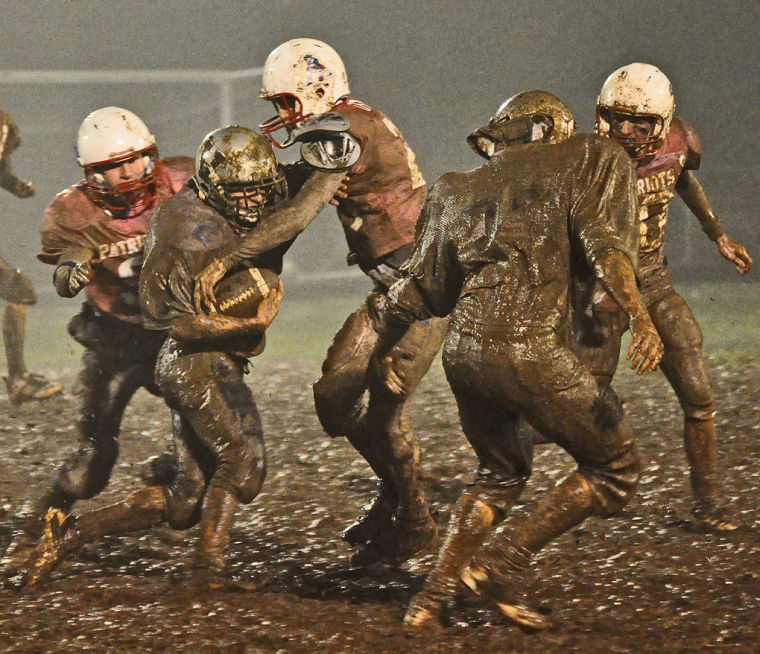 Valley’s Robbie Belmont takes on some Midland Trail Patriots — and the mud — in Friday night’s 26-18 win by the Greyhounds. 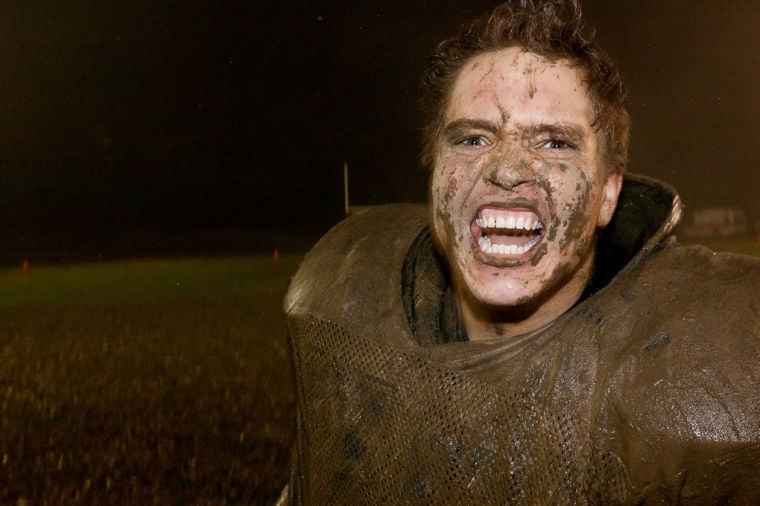 Valley’s Robbie Belmont takes on some Midland Trail Patriots — and the mud — in Friday night’s 26-18 win by the Greyhounds.

Midland Trail was pretty in pink for a while, but in the end the Valley Greyhounds left the Patriots feeling a little blue.

The Patriots, wearing pink jerseys in honor of breast cancer awareness, built up an 18-6 second-quarter cushion over Class A No. 8 Valley before the Greyhounds game to life and rallied for 20 straight points to escape the hosts’ upset bid with a 26-18 verdict.

Robbie Belmont rushed 22 times for 213 yards and scored three touchdowns — one on a 5-yard burst in the second period and two more on runs covering 27 and 44 yards in the second half — to power Valley’s seventh win in nine games and set up a matchup at home against Class AA Summers County next Friday.

Belmont said his team simply had to adjust to the muddy, snowy and cold conditions to mount a second-half rally against one-win Midland Trail.

“Midland Trail’s not a bad team,” said Belmont. “We just had to fight through the weather.”

Belmont, who tied the contest at 18-18 with his 44-yard gallop early in the fourth period after teammate Eric Oden recovered a Midland Trail fumble, also had a crucial defensive play in the game’s waning minutes.

After Valley quarterback Matt White — aided by a nice backside block by Cody Winter — scored on a right-to-left scramble that covered 22 yards and put Valley up by a TD at the 8:45 mark of the final period, Midland Trail proceeded on a long march to try to get back in the game. With back Marshall Wood doing most of the damage, as he had all night, the Patriots took the ball on their own 31 and advanced into Valley territory.

In addition to Wood’s running, Drew Keenan connected with receiver Nathan O’Dell on a key 13-yard pass on fourth-and-5 from the VHS 43. Four plays later, though, with Midland facing a fourth-and-8 situation at the Valley 25, Belmont stepped in front of a Keenan pass and intercepted it to allow his team to ice the win.

“We couldn’t get the ball to the quarterback in the first half,” said Valley coach Benny Hopkins. “You can’t get off a play if you can’t (handle the ball).

“The field was awful, and I think it hurt us more. But we got Robbie outside a couple of times, and we played better defense in the second half.”

While Valley seemed to have more trouble adjusting to the conditions in the first half, Midland Trail experienced more of its problems in that category in the last two quarters.

“We knew we’d have to control the ball because they are so explosive on offense,” said Midland Trail coach Joe Dean. “We laid the ball on the ground so many times (in the second half).

“And Valley has a good team.”

Wood, who time after time fought off several Valley tacklers on his runs, finished with 25 carries for 128 yards. His 8-yard TD run in the second period occurred after a Valley drive ended on downs following a bad snap on a punt attempt.

Midland Trail got its first score when Glenn Neal recovered a blocked punt in the end zone with 3:29 left in the opening period.

The Patriots’ third score, a 1-yard run by Keenan, was set up by a Taylor Buchanan fumble recovery.

White’s fourth-period score was set up when Valley teammate Corey Tolley recovered a Trail fumble on a kickoff, the Pats’ second fumble in as many plays.

“That was basically it (the turning point),” Dean said of the two miscues. “Had we been able to (keep hold of the ball), we’d have been OK.

“These kids have worked so hard and seemed to have some fun. All year long, they’ve been iron men. They’re great young men.”

“Next week will be a big one,” said Hopkins.