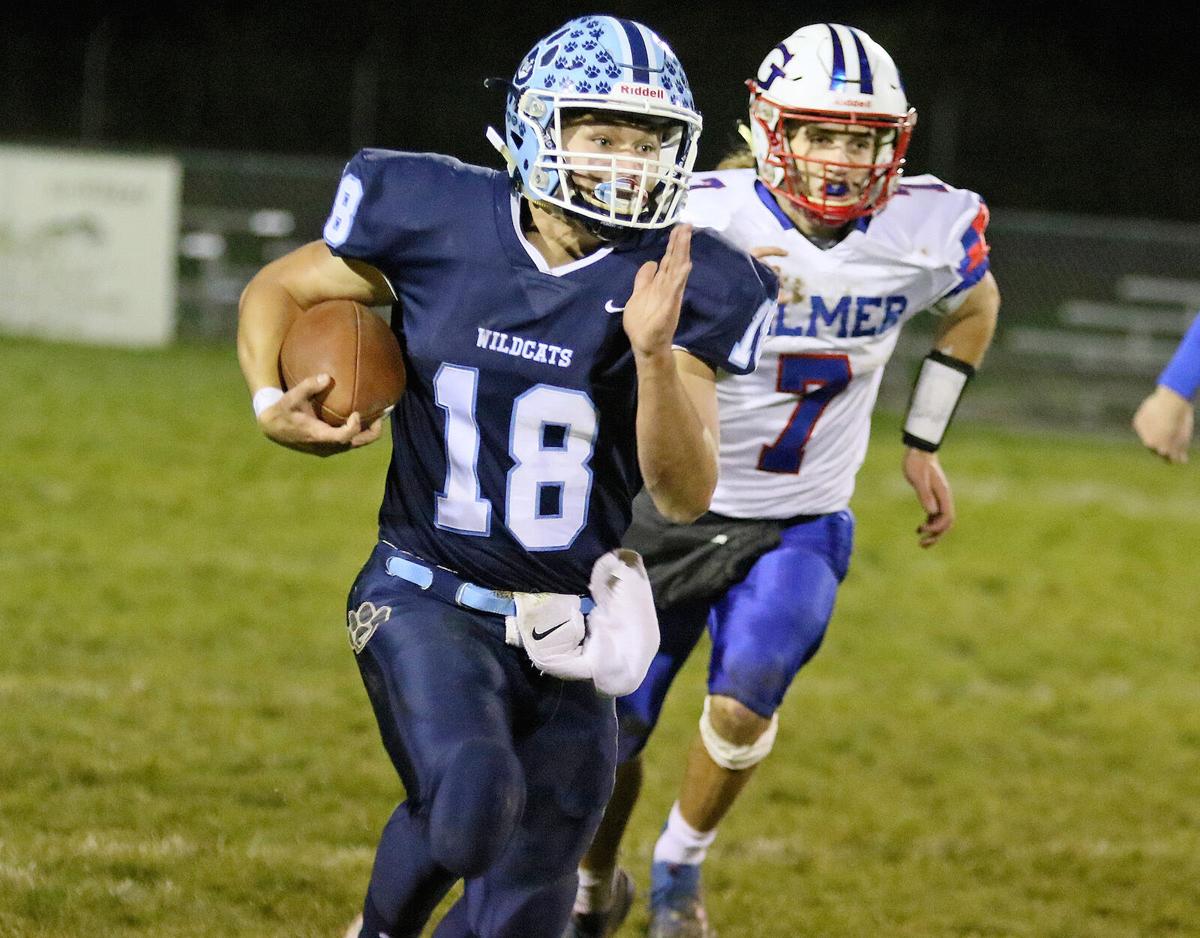 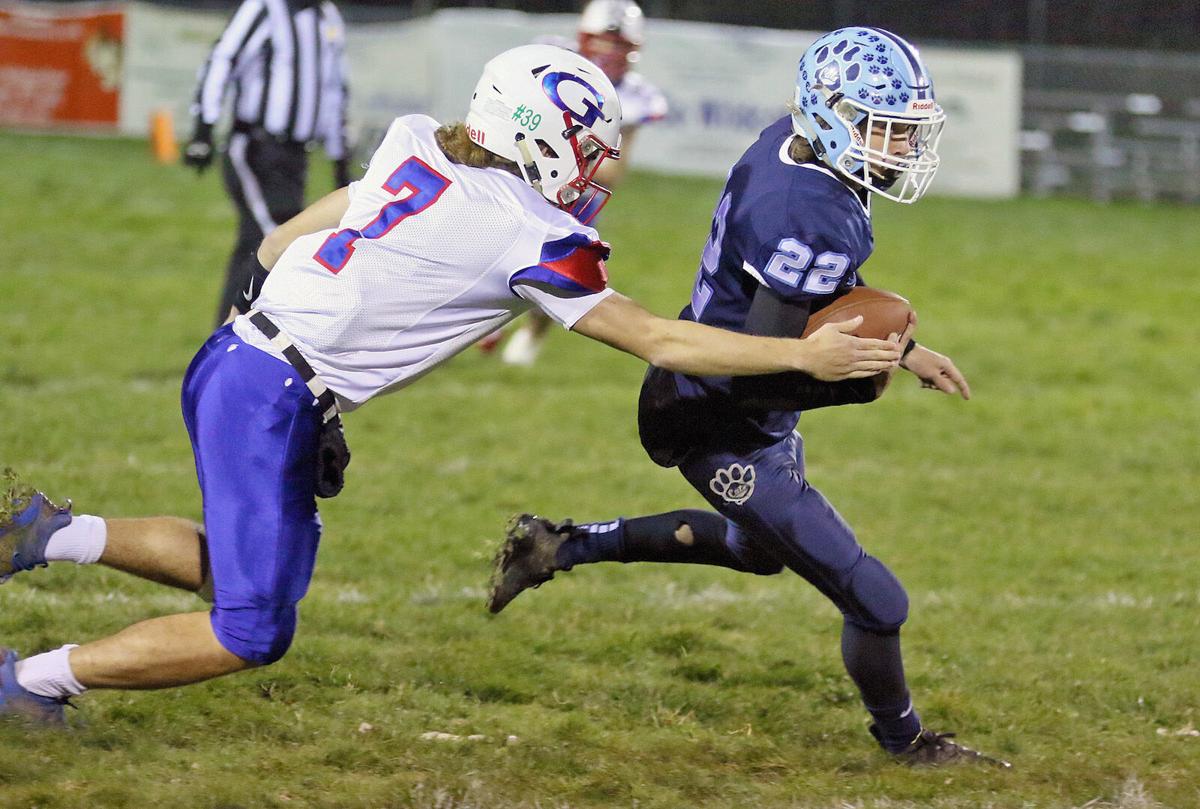 MEADOW BRIDGE — A strong start and an even stronger finish Friday propelled Meadow Bridge back to the Class A football postseason for the first time since 2015.

The Wildcats, Class A co-No. 17 entering Friday night's game against No. 12 Gilmer County on a cold, clear night at Frank Arritt Stadium, drew first blood in the opening quarter, trailed 14-8 entering the final period, and punched across two late touchdowns to post an exciting 24-14 win over the Titans to keep their season going at least one more week.

"It's been a six-year drought since Meadow Bridge has been in the playoffs," said Meadow Bridge senior quarterback Dustin Adkins, who passed for one score and ran for another to guide the Wildcats. "As a senior coming through Meadow Bridge, it's real important for us to get back in it.

"We feel like we've been close the past couple of years, and we're happy we're back in the running. We knew that we could come out here and compete with this team. We showed it early, and they came in and had a couple of big plays, but we knew coming back out at the half that this was our ball game to win."

"(Tonight) I think everybody had a reason to be here," Adkins added. "Everybody knew there was hope, that if we won this ball game, we were in."

Meadow Bridge got the game's first score on a 4-yard TD run from Devon Brown. Brown's six-pointer capped a six-play, 57-yard opening drive that was kept alive by a key 22-yard swing pass from Adkins to Rian Cooper on fourth-and-1 at the Gilmer County 48.

The Titans responded with a TD pass right before the halftime horn, as Ean Hamrick connected with Garrett Butler on a 22-yard score with 14.4 seconds left. That possession covered 80 yards and featured a key 27-yard rush by Colton Hall. Then, Gilmer reached the end zone on another scoring hookup — this one on a 16-yard pass from Hamrick to Avery Chapman with 8:12 to go in the third — giving the 'Cats an uphill challenge as the game wore on.

"The score before half was kind of a blown coverage," said Meadow Bridge head coach Dwayne Reichard. "We kind of had the quarterback outside the pocket, and he throws back across the field and makes a great play. Luckily, the kids weren't down on one another.

"They start the second half and get a score, it is an opportunity to start hanging your heads and jawing at one another. I didn't see any of that." Reichard said the message to his players was that "we dug ourselves a hole and now it's time to climb back out. When we scored to go up 16-14, I said 'we got out of the hole and we filled it up, now let's keep it full.'"

The first big move in that direction was an 11-yard TD pass from Adkins to Conner Mullins, with Seaton Mullins hauling in the conversion pass from Adkins to push Meadow Bridge back into the lead, 16-14, with 4:20 left. A 10-yard run by Adkins, a pass interference call against Gilmer, and a 20-yard pass from Adkins to James McClure helped set the stage for the go-ahead score.

On the ensuing Titan possession, Meadow Bridge's Landon James recovered a Gilmer County fumble, giving the Wildcats possession at their own 47 at the 4:14 mark. Another Gilmer interference call aided the Wildcats, and Adkins later connected with Conner Mullins on a 7-yard screen pass to set up a fourth-and-3 situation at the Titan 28. At the 1:33 mark, Adkins was flushed out of the pocket and found an open field in front of him for a 28-yard TD to provide the final dagger for the hosts.

"We wanted to get a couple of first downs to kill the clock and get out of here with a win," Adkins explained. "We knew we needed a couple of yards, and my receivers worked real hard to get open.

"They took the defense and cleared them out, and I just ran right down the middle."

Adkins connected with Cooper in the back of the end zone for the all-important conversion pass that kept Gilmer County at a two-score distance with just 1:33 to play.

"We made a couple of plays, and there at the end, Dustin scores and even he told me, 'I should have just fallen down.'" Reichard said. "In the moment, you're going to score a touchdown, and that's the way it is.

"We knew we needed to get the two-point conversion, and we were able to make a play there and get him outside the pocket and find a receiver and he made the play."

"It's incredible, it's amazing," Adkins said.

Adkins was 15-of-24 for 136 yards on the evening, and he rushed seven times for 48 yards. Brown gained 53 yards on the ground, Cooper caught five passes for 54 yards and McClure had five catches for 44 stripes.

"We came in last week and got a big win (22-14 over Sherman) and kind of put ourselves in a position where we could control our own destiny," said Reichard. "That's what we've been preaching all week. You win one this week, and it's a guaranteed playoff spot.

Friday's win means Reichard will be coaching in the playoffs as a head coach for the first time.

"I told the kids yesterday I was part of a playoff team as a player one year and several as an assistant coach, and I talk about how special it is to get that feeling that you're one of 16 teams that will walk on that field the next Monday to practice," he said. "And to do it as a head coach is a little extra special."

The Midland Trail Patriots (6-4) also closed out the regular season with a win, topping the Pocahontas County Warriors at home by a tally of 42-6.