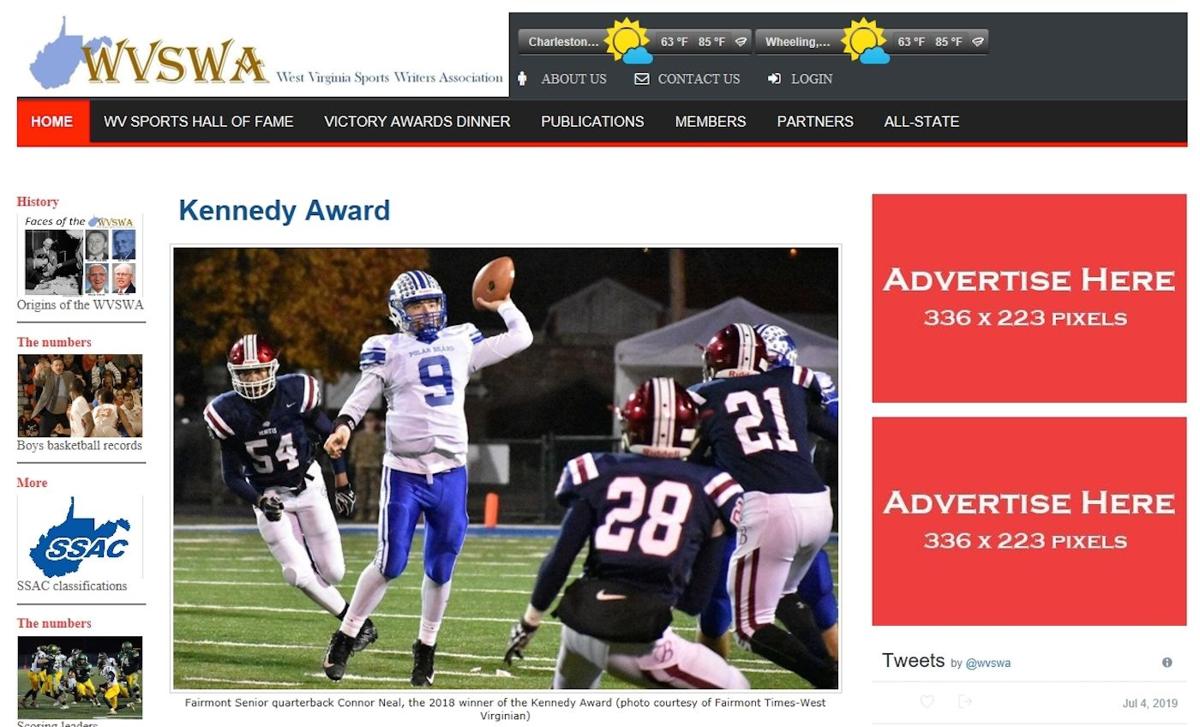 The new website of the West Virginia Sports Writers Association, wvswa.org, will debut on Aug. 1. It will offer a variety of historical sports features, including a listing of all-state teams chosen by the organization in several sports.

The new website of the West Virginia Sports Writers Association, wvswa.org, will debut on Aug. 1. It will offer a variety of historical sports features, including a listing of all-state teams chosen by the organization in several sports.

They might have played with or against them or were in the stands watching them work their magic on their respective fields of play. Or, maybe they've read newspaper accounts or heard stories passed down from family and friends about an athlete's exploits.

Names such as Jerry West, Randy Moss, John Kruk, Alexis Hornbuckle, Lonnie Warwick, Nick Saban, Don Robinson, Mary Ostrowski, Tom Pridemore, Sam Huff and Susan Robinson are a few of those who come to mind that forged outstanding careers inside and outside of the state’s boundaries.

Before all those names are further relegated into the dustbin of history, the West Virginia Sports Writers Association will compile them in a new website which will debut on Thursday. According to longtime Mountain State sports journalist Rich Stevens, wvswa.org will feature an exhaustive listing of West Virginia high school all-state teams chosen by the writers' group in a history that spans more than 100 years.

Stevens labels the website a work in progress, due in large part to the laborious process of typing the teams for public consumption. "When all is said and done, the site will have every all-state team in the history of the association," he said.

Stevens says the site will be "a valuable resource" for media members as well as being worth a look for those simply interested in brushing up on their knowledge of state sports history.

"It is going to be history-based," he said. "It saddens me people do not have a grasp on history." The website will provide "a blueprint" for recognizing athletes and coaches who have contributed to the state's proud high school athletic history.

The all-state lists will be just one of the many features on wvswa.org, according to Stevens, a life member of the WVSWA and site webmaster.

There will be a trivia section, a section detailing state championship history, a history of WVSSAC classifications, scoring leaders and team streaks, and others. The website will also include every football playoff score, including preliminary rounds, and all of the state basketball tournament results.

And that's not all.

Biographies of each member of the West Virginia Sports Hall of Fame will be featured, as well as a history of the Victory Awards Dinner – the oldest fete of its kind in the United States -- which annually recognizes all-state players and the winners of various awards presented by the association. In addition, there will be links to WVSWA member websites, the West Virginia Secondary School Activities Commission's site, and the West Virginia Press Association site.

There also will be information that visitors did not know or have forgotten:

• Rod Thorn, a member of the Naismith Memorial Basketball Hall of Fame, was all-state in 1959 with Gay Elmore (the father of Jon Elmore) and eventual John Marshall boys coach Pancho Flores.

• Don Stover, the former Stonewall Jackson basketball coach, was an all-state player for Pax in 1953.

• Pineville's Curt Warner, of Seattle Seahawks fame, was all-state in basketball in 1979 along with Sherman’s David Daniel (the father of South Charleston boys coach Josh Daniel) and Northfork’s Russel Todd.

• Former Major League player and Keyser native John Kruk was all-state in basketball for the Golden Tornado in 1978.

• Dave Rider, the grandfather of Jason Witten, was a first-team all-state running back at Big Creek in 1958.

• Don Robinson was a third-round pick by the Pittsburgh Pirates as a 17-year-old out of Ceredo-Kenova after a senior season during which he was 8-4 with seven earned runs surrendered in 83 innings and had eight of C-K’s 14 wins.

Stevens worked at newspapers in Wheeling and Charleston from 1989 to 2015, and he's been a teacher for Fayette County Schools since 2016. During his newspaper career, he held various offices in the WVSWA, including president, as well as chairing several all-state basketball committees.

With a big assist from Doug Huff, WVSWA secretary-treasurer, respected state sports historian and member of the National High School Sports Hall of Fame, Stevens has undertaken the task of completing voluminous research and preparing the site over the past two-plus years. Part of this past Sunday, for example, he typed the 1937 all-state football team, which included members from now-closed schools Union (Benwood in Marshall County), Terra Alta (Preston County), Victory (Harrison County) and Piedmont (Mineral County). That was part of the process of compiling all-state lists into Word documents 10 years at a time.

In his quest to make the website more “user friendly,” Stevens said photos will be prevalent on the website – wvswa.org.

Visitors to the site will never be charged to view it, Stevens said. However, advertising blocks will be sold at tiered levels in one-year commitments. To discuss advertising, contact Stevens by phone at 304-541-0856 or via email at rstevens102566@gmail.com. Also, donations to help the WVSWA provide awards and recognition for state athletes and coaches will be accepted. The WVSWA is a non-profit 501(c)(3) organization.

Any verified corrections or additions to the information on the site can also be sent to Stevens.